Chemotherapy for men with testicular cancer could be made ‘shorter, kinder and cheaper’ with a new type of therapy.

Researchers testing a combination of three drugs found a single three-week cycle was just as effective as the standard six weeks normally given to patients.

Men given chemo for testicular cancer usually have it to make sure the disease does not keep spreading after the diseased testicle is removed.

But the medication can cause crippling side effects including sickness, tiredness, weight loss, hair loss, infections and diarrhoea.

In a three-week trial, four out of 10 men had side effects – which the researchers said was ‘substantially lower’ than usual – and the treatment was just as effective as a normal course. 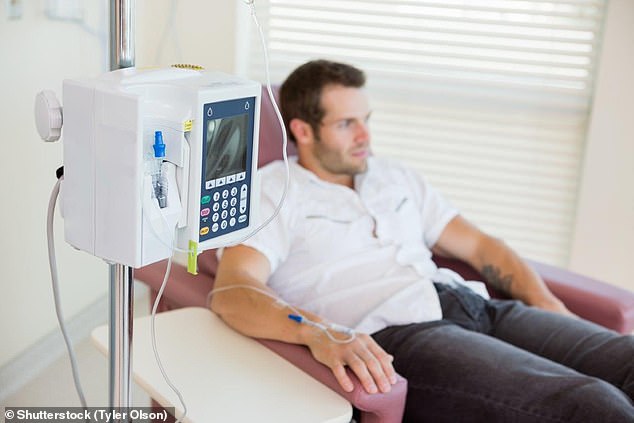 ‘Our study has found strong evidence to suggest testicular cancer chemotherapy can be safely reduced from two cycles to just one – making [patients’] treatment shorter, kinder and cheaper,’ said Professor Emma Hall, from the Institute of Cancer Research in London.

The ICR yesterday published the results of a trial it carried out with the University Hospitals Birmingham NHS trust.

A total of 250 cancer patients took part in the trial, which tested the effects of a combination of drugs – bleomycin, etoposide and cisplatin (BEP).

BEP chemotherapy is already used to treat testicular cancer patients but usually in two three-week cycles, rather than the single one given to patients in the trial.

All the men involved had high risk stage one non seminomatous cancers, which were likely to return after treatment.

But only 1.3 per cent of men (three out of 250) had their cancers return, a rate which is similar to that among men who have six weeks of chemotherapy.

‘We tend to be focused on whether we can cure a cancer or not,’ added Professor Hall.

‘But for a disease like testicular cancer which affects young people, it is also crucial to ensure treatment does not leave patients with a lifetime of adverse effects.

WHAT SIDE EFFECTS CAN CHEMO FOR TESTICULAR CANCER HAVE?

Chemotherapy given for testicular cancer is generally used to wipe out any remaining parts of the disease after a patient has had their testicle removed to get rid of the main cancer.

General and common side effects may include sickness, tiredness, weight loss, hair loss, infections and diarrhoea.

One of the most commonly used drug combinations – the combination used in the study by the Institute of Cancer Research and the Birmingham hospitals – is bleomycin, etoposide and cisplatin (BEP).

These drugs can also cause a loss of appetite, fever, mouth sores, swelling inside the lungs and other breathing problems, nerve damage, low blood pressure and heart problems which could raise the risk of stroke or heart attack.

‘There is an important balance to be struck in giving men enough chemotherapy to stop their testicular cancer from coming back, without giving them so much that they suffer unnecessary side effects.’

It has a promising survival rate, with 98 per cent of British patients still alive 10 years after being diagnosed.

But the treatment can be unpleasant and cause severe or permanent side effects such as nerve damage, heart damage, breathing problems or hearing loss.

The ICR scientists said lower doses of chemotherapy are known to reduce side effects so halving someone’s treatment time was a positive step.

The patients in their study were followed up for around four years to check whether their cancer had returned.

Professor Robert Huddart, urological cancer expert at the ICR, said: ‘Reducing the overall dose of chemotherapy could spare young men who have their whole lives ahead of them from long-term side effects.

‘And it also means they will need fewer hospital visits for their treatment.

‘This new trial is already changing clinical practice on a global scale, and is set to improve patients’ quality of life as well as reducing the cost of testicular cancer treatment.

‘Reducing the number of cycles and the dosage of chemotherapy for testicular cancer could save the NHS money and free up valuable hospital time and resources.’

The research was published in the medical journal European Urology.

WHAT ARE THE MEDICAL IMPLICATIONS OF LOSING A TESTICLE?

He wrote: ‘Around 90 per cent of the male sex hormone testosterone, is produced by the testicles.

‘Testosterone is the hormone responsible for secondary male characteristics such as muscle, bone growth, hair pattern, deep voice and a general feeling of well-being in men.

‘It is also responsible for sperm growth. Having one testicle removed should not affect the overall testosterone levels, sex drive or ability to have an erection or fertility.

‘Providing that the remaining testicle is healthy, it should do the job of both.

‘If it is performed for testicular cancer and subsequent chemotherapy is needed, men will be advised to bank sperm as chemotherapy may cause temporary infertility.

‘Men who lose both testicles are likely to have erection problems due to the reduced levels of testosterone. They will also be unable to father a child naturally.

‘When testosterone levels are minimal men will often experience a loss of libido, well-being and may experience lethargy, low mood and depression, weight gain and sometimes breast swelling.

‘In this situation testosterone replacement therapy will be needed. This can be administered in the form of injections, gels or patches but may take some weeks for levels to normalise.’