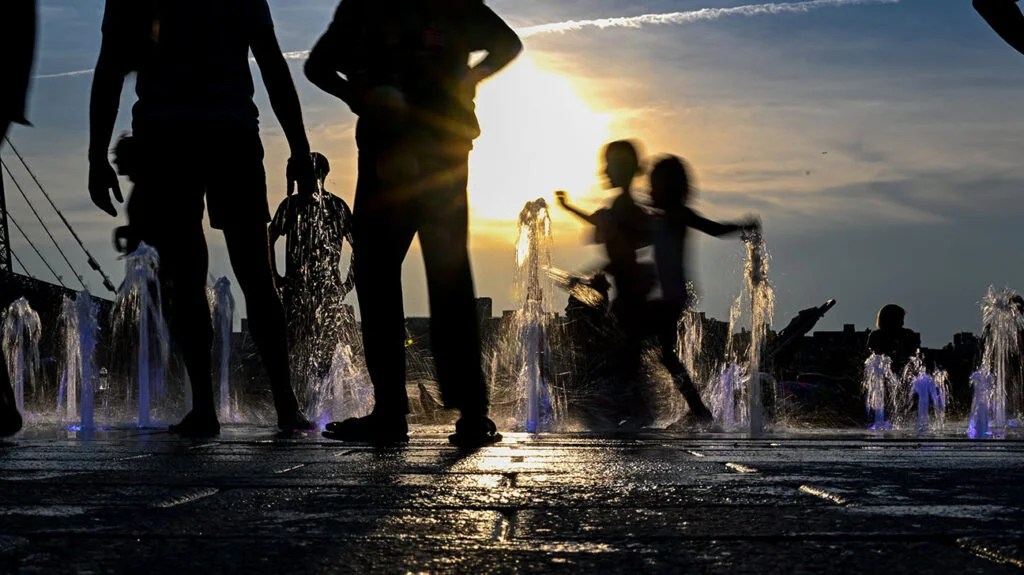 The planet is enduring more frequent intense heat waves due to climate change, which is mostly caused by humans burning fossil fuels such as coal, oil, and gas. The last eight years have been the hottest on human record, according to the World Meteorological Organization.

Some research studies indicate that climate change may also be linked to severe winter weather, like that experienced in Texas in February of 2021.

A paper about their efforts, which is published in Circulation, a flagship journal of the American Heart Association (AHA), explains that the researchers found more deaths on days when temperatures were at their highest and lowest.

The study suggests both extreme hot and extreme cold temperatures increase the risk of death among individuals with cardiovascular disease (CVD), like ischemic heart disease, stroke, heart failure, and arrhythmia.

How the heart responds to extreme temperatures

On extremely hot days, the heart shifts blood from major organs to underneath the skin, where it is cooler.

“Sweating also happens,” Dr. Barrak Alahmad, lead author of the study as well as a research fellow at the Harvard T.H. Chan School of Public Health and mission scholar at the College of Public Health at Kuwait University in Kuwait City, explained to Medical News Today.

“This could lead to volume depletion that increases heart rate. Increased core body temperature will also increase the metabolic state and oxygen consumption. Then you might also [experience] fluid shifts and electrolytes imbalance (specifically, potassium, magnesium). All of these [cascade] in susceptible individuals…” he further explained.

In hot weather, people who are older, obese, have high blood pressure, or have a history of heart disease need to take precautions like avoiding the outdoors in the early afternoon and staying hydrated, according to the AHA.

“Blood vessels will constrict, and skeletal muscles will increase tone to preserve and generate heat. This will increase blood pressure. Some researchers suggested that cold makes cholesterol crystals deposit in blood vessels and causes heart attacks. Other researchers showed that cold makes your blood more sticky, and that also increases the risk of heart attacks,” said Dr. Alahmad.

For this study, the team of researchers led by D. Alahmad used data collected by the Multi-County Multi-City Collaborative Research Network, an international collaboration of scientists looking for epidemiological evidence of associations “between environmental stressors, climate, and health.”

They analyzed more than 32 million cardiovascular deaths that occurred in 567 cities in 27 countries on five continents between 1979 and 2019. Researchers obtained city-specific daily temperatures from weather stations and climate reanalysis models.

“We now learned that for every 100 cardiovascular deaths, at least 1 additional death is from extreme cold and hot days. Considering that cardiovascular disease is the leading cause of death globally, this essentially translates into a very large burden,” Dr. Alahmad said.

Of all the types of heart disease, heart failure caused the greatest number of deaths from extreme temperatures, the researchers found.

The researchers did not find a significant association between extreme heat and death from arrhythmia. The researchers write that this may be caused by arrhythmia being misclassified as the cause of death when the death was actually caused by ischemia or cardiomyopathy.

Dr. Don Pham, interventional cardiologist at Memorial Hermann in Houston, Texas applauded the study for providing “a new and interesting approach to prevention.”

“I think this serves as a good reminder to patients during the winter or summer months [that] when the weather has drastically [changed] in your region to pay attention to any new symptoms that occur,” he told MNT.

Although the study looked at cities in many countries, some parts of the world received less attention.

“Readers must be cautioned when interpreting our findings as global estimates since some regions were underrepresented in our data such as South Asia, the Middle East and Africa,” Dr. Alahmad told MNT.

“Extreme temperatures might have a larger impact in these underrepresented regions,” he added.

The role of social determinants of health

Future research needs to look at the social determinants of health and climate change, said Dr. Martha Gulati, director of preventive cardiology at the Smidt Heart Institute at Cedars-Sinai in Los Angeles, California, and president of the American Society for Preventive Cardiology.

“[T]he persons most vulnerable already for CVD may be the persons living without [air-conditioning] or without heat. Perhaps having jobs that expose them to these extreme temperatures too.”
— Dr. Martha Gulati

Dr. Gulati would also like to see research that collects data on incident cardiovascular disease.

“[T]he cost to global health systems is affected by more than just mortality. Additionally, on a population level, the number of people living with cardiovascular disease, if increasing as a result of climate change, is important when creating predictive models for cardiovascular disease burden,” she told MNT.

“We can provide exact directions to healthcare providers on what they should advise their patients,” he told MNT.

Dr. Gulati, on the other hand, believes more data needs to be collected before this step can be taken.

“But I do think that cardiologists and our national and international societies need to take a stand about climate change and also lead and advocate for our countries to address climate change in order to protect human health,” she said.

In September, Dr. Gulati argued in a piece for The American Journal of Preventive Cardiologythat the cardiology community must work to affect public policy to offset the impact of climate change.

Heart disease is the leading cause of death globally, according to the World Health Organization. That said, death rates from cardiovascular disease (CVD) have declined since the 1960s.

In the United States, that can be contributed to public health interventions that reduced smoking and the consumption of dietary fat along with improvements in medical care, according to the Centers for Disease Control and Prevention.

“We need to be on top of emerging environmental exposures. In this rapidly changing climate and [at an unprecedented] pace of warming, it is not the time to be asleep at the driving wheel.”
— Dr. Alahmad

“If we do not reverse the course urgently, the impact on human health, particularly heart health, will be dire,” she told MNT.