How a good economy may equal a BAD flu season: Each 1% jump in employment rate ‘is linked with a 19% bump in flu-related doctors’ visits’

Countries with strong economies – such as the US – may suffer more severe flu seasons, scientists claim.

Analysis of data found that for every one per cent increase in employment rates, there is a 19 per cent bump in flu-related doctors’ visits.

Job growth means more people are in the workplace, which could increases the spread of flu between people, experts say.

Retail and healthcare workers are said to be most at risk because they are more likely to be in contact with lots of people.

The researchers at Ball State University, Indiana, said monitoring economy growth could be a way of preparing for an upswing in flu cases.

Employers have also been urged to encourage sick days so people don’t feel forced to come into work when they are ill, which could spread bugs. 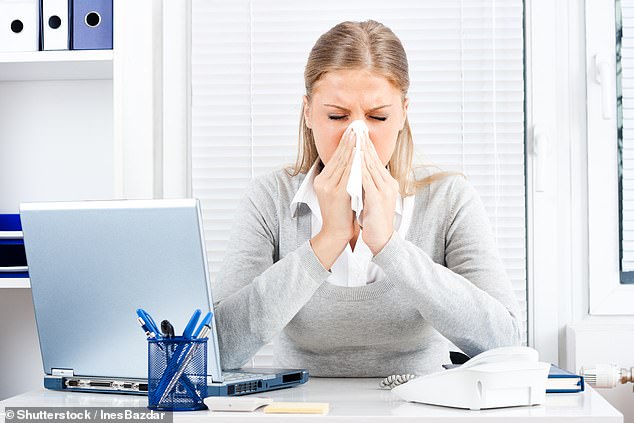 Each one per cent jump in employment rate correlates with a 19 per cent bump in flu-related doctors’ visits, scientists found (stock)

Unemployment has steadily been declining in both the UK and US since 2011. In 2019, 96 per cent of adults were working, figures show.

Dr Erik Nesson, an associate professor of economics and co-author of the study, said a thriving economy can be negative for public health.

‘It seems to be a place where higher economic activity is detrimental to people’s health,’ Dr Nesson said on January 15, CBS News reports.

The study, published in the journal Economics & Human Biology, was led by Dr Sarah Markowitz , an economics professor at Emory University.

Each week during flu season, doctors submit data on how many patients visited with flu-like symptoms, including a fever, cough and sore throat.

Figures were compared with detailed statistics on employment numbers collected by the Bureau of Labor Statistics (BLS).

Spread of flu was linked with higher employment, particularly in sectors with high interpersonal contact.

HOW TO PROTECT YOURSELF FROM THE FLU AT WORK

The Centers for Disease Control and Protection advise to:

‘Workers concerned about missing pay or losing their jobs as the result of staying home from work due to illness will be less likely to heed early signs of influenza infection and stay home.

‘Since a person may be infectious while experiencing mild symptoms, this greatly increases the probability that the virus will spread to other workers in the firm.

‘This implies that firms should consider more generous sick day policies, particularly during the flu season.’

Flu seasons cover the winter months but there is no consensus among scientists for why this is.

Transfer of the virus happens through droplet spread – when a person sneezes or coughs, their infected mucus stays in the air and can be picked up by someone else.

Keyboards, water coolers, bathrooms and other office equipment such as telephones can all harbour germs.

Dr Nesson said using public transportation and carpools, working in offices, putting children in daycare, and having frequent contact with the public, all contribute to the spread of flu.

Flu activity is high in the US this year. The death rate is nearly double what it was last year, federal health officials warned this week. About 4,800 people have died, an increase of 65 per cent since the New Year began.

So far, about 9.7million people have fallen ill and 87,000 people have been hospitalised, according to figures from the CDC.