Revealed: How cases of deadly asbestos cancer are rising in women who joined the workforce decades ago

Recently qualified as a secretary, Susan Ellis, then aged 23, was excited to take on a position as a personal assistant in a leading firm of architects in Birmingham.

It was 1968 and she couldn’t wait to join the world of work, be independent and earn her own money. She was also joining the legions of women who’d recently entered the workforce.

Not long after starting the job, Susan went on a site visit with her boss to a new shopping centre he had designed in Liverpool. It was a trip she made a number of times while she worked at the firm over the course of a year.

But what seemed an unremarkable part of her job at the time would come back to haunt her 50 years later as, in 2018, Susan was diagnosed with mesothelioma, a deadly form of lung cancer caused by exposure to asbestos. 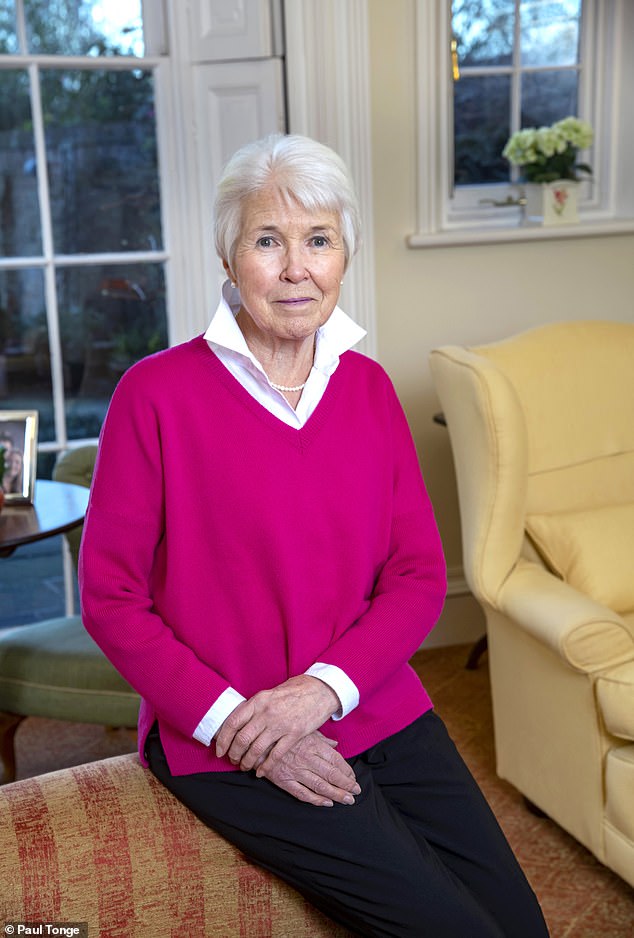 Recently qualified as a secretary, Susan Ellis, then aged 23, was excited to take on a position as a personal assistant in a leading firm of architects in Birmingham. It was 1968 and she couldn’t wait to join the world of work, be independent and earn her own money. She was also joining the legions of women who’d recently entered the workforce

And investigations have shown that during one of those visits to the construction site, lasting just a few hours, asbestos was being sprayed on the ceilings.

‘The diagnosis was quite a shock,’ says Susan, 78, who lives in Pershore, Worcestershire. ‘My parents both lived into their 90s and, as I had no illness or health conditions, my expectation was that I had a good few years’ ahead of me to enjoy life with my two sons and five grandchildren.’

Susan’s experience is becoming increasingly common. Latest figures from Cancer Research UK show that, while men account for most cases of mesothelioma, cases among women rose by 93 per cent between 1993 and 2018 (compared with 47 per cent in men).

‘The proportion of women being diagnosed with mesothelioma has never been higher,’ says Dean Fennell, a professor of thoracic medical oncology at the University of Leicester. ‘Given the disease can take decades to develop, this rise seems to coincide with when more women joined the workforce from the 1950s onwards.’

Roughly 2,700 people in the UK are diagnosed with mesothelioma every year. Asbestos, a flame retardant used in construction in the UK until 1999, is the main cause. Breathing in tiny asbestos fibres can damage the lungs and their lining (the mesothelium) although it can take years, even decades, for symptoms — breathlessness, coughing and chest pain — to develop. 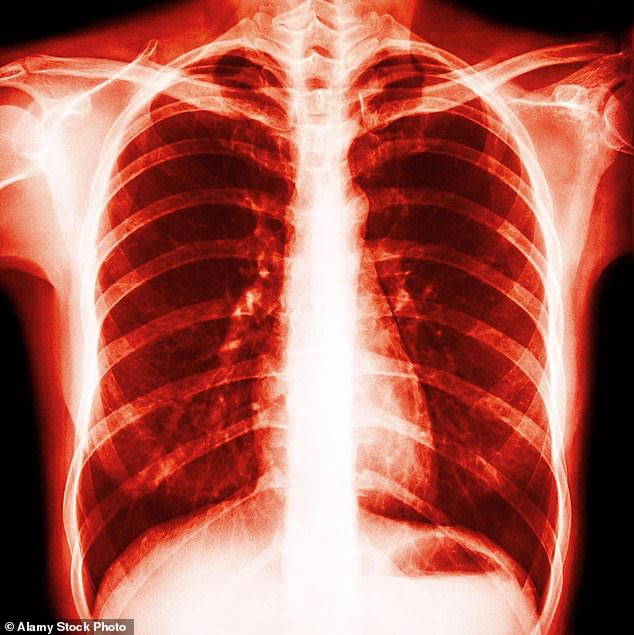 Latest figures from Cancer Research UK show that, while men account for most cases of mesothelioma, cases among women rose by 93 per cent between 1993 and 2018 (compared with 47 per cent in men)

As these kinds of symptoms are common to a number of illnesses, mesothelioma is often misdiagnosed or not picked up until the cancer is advanced and treatment is more difficult.

‘Mesothelioma is a devastating and hard-to-treat disease with people often diagnosed at a late stage and typically facing a poor prognosis,’ says Liz Darlison, chief executive of the charity Mesothelioma UK.

Mesothelioma mainly affects the lining of the lung rather than the lung itself, making it different from lung cancer (and asbestosis, which is non-cancerous scarring of the lung tissue caused by asbestos).

There are six million tonnes of asbestos in 1.5 million UK buildings, including workplaces, public buildings — even schools — as well as homes, according to research published in 2019 by the think tank ResPublica.

The Health and Safety Executive says it is potentially in any industrial or residential building built or refurbished before 2000.

Susan first became aware of a problem in January 2018 when she found herself out of breath walking up the stairs at home.

‘It was unusual,’ she says. ‘I’ve kept myself in good shape — I was a yoga teacher for many years — and had never had lung problems. I didn’t think much of it as there were no other symptoms but, when it didn’t go away, I saw my GP.

‘He examined me and could find nothing wrong but said to come back if it persisted.’

Two weeks later, Susan went back to her GP and was sent for an X‑ray. She recalls: ‘As I was putting my coat on the radiographer rushed in and said, “You must go straight to A&E!” A doctor showed me the X-ray, indicating a collapsed lung and fluid in the chest cavity. I was hospitalised for a week so the fluid could be drained.’

Susan needed surgery to re‑inflate the lung but as the NHS couldn’t operate for six weeks, she used her health insurance to go private.

‘During the operation the surgeon took biopsies which revealed the mesothelioma diagnosis,’ says Susan. ‘He told me the average life expectancy for someone in my condition was 15 months. I was just so disappointed.’

Recent breakthroughs mean there are more treatment options for mesothelioma patients, says Professor Fennell: ‘For years we only had chemotherapy, but there’s been a lot happening in this area in the last couple of years which has led to advances in treatment.

‘Following successful trials, last year NICE [the National Institute for Health and Care Excellence] approved the first new treatment in over ten years for patients with unresectable malignant pleural mesothelioma — which accounts for 90 per cent of cases.’ (This is the form that Susan has.)

The treatment is ‘a type of immunotherapy, where we attempt to train the body to fight the disease itself, and is a combination of two drugs: nivolumab and ipilimumab.

‘It can be used now as a first-line treatment for these patients and trials show this gives patients a survival advantage of four months compared with chemotherapy alone.’

For patients whose cancers have grown after chemotherapy, nivolumab also improves survival — by over a month, according to data from the Cancer Research UK-funded CONFIRM trial, led by Professor Fennell. The NHS is now making nivolumab available to these patients.

‘This is a huge breakthrough as many patients only have months to live by the time they are diagnosed,’ says Professor Fennell.

New research is focusing on trying to uncover why some mesothelioma patients respond better to treatment than others, by looking at their genes and microbiome, the community of microbes including bacteria that live in the gut.

‘If we can identify mesothelioma’s Achilles’ heel we could target treatments much more effectively,’ says Professor Fennell.

Since her diagnosis, Susan has undergone two rounds of chemotherapy followed by nivolumab and ipilimumab — and most recently, in autumn 2022, radiotherapy to reduce pain. And she has done remarkably well. This month it will be five years since she was diagnosed — far exceeding the average life expectancy.

‘The frustrating thing is I am otherwise totally fit and have no other conditions,’ she says. ‘Once they had reinflated my lung, I didn’t really have any symptoms other than the side-effects of chemotherapy. Sadly immunotherapy didn’t work for me.’

But recent scans have shown that the cancer has spread to her ribs and diaphragm and Susan’s breathing is now more difficult.

‘I am still functioning — I can walk for short distances but have got myself a buggy to go to the shops,’ she says.

‘I find standing quite difficult and even the slightest movement has an effect on my breath.

‘I think I am in the last year now and I’ve taken the positive decision not to have more treatment, even though I was offered more chemotherapy and to go on a clinical trial. The benefits, if any, are small and I want to focus on quality of life,’ she says.

‘I have a wonderful GP who is dedicated and the local hospice nurse looks after me both physically and psychologically.

All along I have had this overwhelming feeling of disappointment but now, as the end isn’t far off, I am angry.’

Investigations by a solicitor, which included getting hold of original construction notes for the shopping centre, showed with some certainty that it was those site visits in Liverpool more than 50 years ago which had caused Susan’s disease, and she received a payout in 2021 from the Government’s mesothelioma compensation scheme.

‘I want people to be aware that mesothelioma is not just an industrial disease, linked to the building sector — it affects normal people like me who never realised they were putting themselves at risk,’ says Susan.

‘And it is still present in a huge number of hospitals, schools and other public buildings.

‘One woman I know developed it after going into a cellar at school to pick up some files, another from washing overalls belonging to her husband, a builder. He didn’t get mesothelioma, but she did.

‘Research into mesothelioma lags behind many other cancers. We need to put more money into it to find a cure for this disease, not just pay out compensation to those who develop it.’

To donate to research into mesothelioma, visit junehancockfund.org