Dan Price was 70 kilometres into a 100-kilometre run through the Blue Mountains when the voice in his head became deafening.

It reminded him how exhausted he was and assured him he’d done enough. Why did he have to finish anyway? Especially when the pain of old injuries was flaring through his body. Was it a fear of failure driving him? If so, he should definitely quit because the old stickler within him needed to learn that failing was OK. 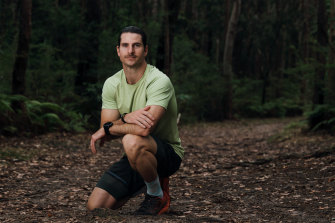 Dan Price is set to tackle a 205-kilometre trail from Myall Lakes to Barrington Tops on the mid-north coast of NSW.Credit:James Brickwood

But, the 36-year-old father of two kept putting one foot in front of the other. He reminded himself of the people he’d lost to suicide, he reminded himself that he’d almost lost his own life to suicide. He knew that one man dies by suicide every minute of every day around the world, and he had a second chance. He didn’t want to waste it.

So slowly, slowly he moved forward and made it to the finish line.

On Friday, November 12 at 4am, Price will lace up his running shoes again and tackle a mountainous 205-kilometre trail from Myall Lakes to Barrington Tops on the mid-north coast of NSW. He is doing it for himself, for his kids and for Movember, the non-for-profit aimed at supporting men’s health.

Price is not the only one. An increasing number of people are engaging in endurance events and extreme physical challenges for mental health. So much so that the sheer number of emails I receive about people doing these extraordinary feats means they rarely register anymore.

There was Andrew Pap, who ran 250 kilometres across the Australian desert; Joe Gagnon who ran six marathons in six continents in six days (fuelled by peanut butter and jam sandwiches); Tommy Franklin, who danced his way from misery to happiness; Andre Jones, who jogged 3700 kilometres from Melbourne to Darwin; Pat O’Brien and Tim Franklin who are cycling 1000 kilometres in three days (while climbing to the height of Everest); and Bonnie Hancock, who will paddle 16,000 kilometres around Australia starting on December 19. Some do it to raise money and most do it for themselves. But, the fact that so many are drawn to extremes to propel them out of a mental health rut begs the question of why and does it help?

Peggy Kern is an associate professor at the Centre for Positive Psychology at the University of Melbourne. She points out that what is extreme for one person is different for another. So doing a 10-kilometre run, a half-marathon or a pilgrim walk is “Everest” for some, while for others that would be an ultra-marathon or endurance event.

“When we start to think about what draws someone to whatever their extreme event is, it’s often something that, in that person’s mind, is impossible,” explains Kern, whose research focus is health and who has participated in marathons and Ironman events herself.

When that “impossible” task is connected to a cause that is close to our hearts – to honour a lost loved one, for a friend or family member with a life-threatening illness, or our own mental health struggles – it can act as the driver to keep us going when it feels unbearable. And as we stretch beyond what seems bearable, our sense of possibility expands with it.

“It pushes you at every single level, mentally and physically, and you want to quit. And yet you cross the finish line, and it’s very empowering,” Kern says. “It’s this sense of ‘that was impossible to me but if I was able to do that, I can do anything’.”

The discomfort can make us feel alive, adds Leanne Hall, a psychologist who is doing her PhD in ultra-running: “It gives you a different experience of your body and helps you to see your body in a different way.”

For people who have felt weakened by an emotional trauma or mental health issue, that can mean seeing yourself as strong and demonstrating that strength to others too.

Along with a shift in perspective and a sense of accomplishment, there are other reasons why extreme physical activity can benefit us in times of emotional turmoil or mental ill health.

Depression, for instance, often involves excess sleeping, overeating or under-eating and low activity. Training for an event can improve sleep and diet while the stimulation of feel-good hormones like dopamine and endorphins help to improve mood and energy.

“It pushes you at every single level, mentally and physically, and you want to quit. And yet you cross the finish line, and it’s very empowering.”

“There’s the physiological response,” explains Caroline Fitzgerald, an exercise physiologist at Black Dog Institute. “But there’s also a feeling that you’re setting aside time in your day or your week when you’re prioritising yourself.”

The space to reflect and process feelings can facilitate healing, having a goal can give us direction, while working towards an event can connect us to others, providing a sense of camaraderie.

The benefits of physical activity are now so well-established, it is recommended as a mental health intervention.

“With anxiety, you have a bit of a mix. The events can become problematic if you’re anxious about them, whereas setting up a regular pattern of activity that you enjoy can help with anxiety,” she adds. “Physical activity we often think of as physical, but it’s very much mental.”

Despite this, if a person who hates running tries to force themselves to run, it can exacerbate mental health issues, Fitzgerald says. So it is important to find an activity you enjoy and can make a habit out of.

And while extreme challenges can catapult us out of a rut, we need regular healthy activity, rest, support and other coping mechanisms to sustain us.

One of the biggest problems can be the slump after the high of an event: “You have this big goal, and then you hit the goal and now what?” Kern says. “Ask: What am I going to take from all I’m learning and carry forward?”

Trying to maintain the high through ever-more extreme challenges can become problematic and a negative addiction, she says.

“They’ll have a snapped hamstring and keep running if they can,” adds Hall, who says it can become a person’s identity. “Is that really healthy? I don’t know, but it’s certainly better than drugs or alcohol or eating disorders or that kind of extreme – it’s probably a culturally acceptable form of extreme behaviour.”

Dan Price says he keeps the challenges in perspective and ensures his family comes first: “I put the kids to bed most nights, and then I go running at stupid hours and that’s how I fit it in. It’s not sustainable all year round, but for a few months it is.”

And, the benefits are worth some sacrifice over a short period, he says: “I know I’m going to come back as a different person after this. It’s a really wild ride.”

And when he is alone and depleted and wants to quit, he will draw on his reason why.

“I’m running for this cause, and it’s bigger than me. I probably wouldn’t be able to run this far if I didn’t have that driver behind me and my kids. I want to do them proud, and I know that if I do these things, they’re going to be really proud when they hear about what their dad did one day. It’s not about running 200 kilometres, it’s about having big dreams and believing in yourself.”

Make the most of your health, relationships, fitness and nutrition with our Live Well newsletter. Get it in your inbox every Monday.

Most Viewed in Lifestyle