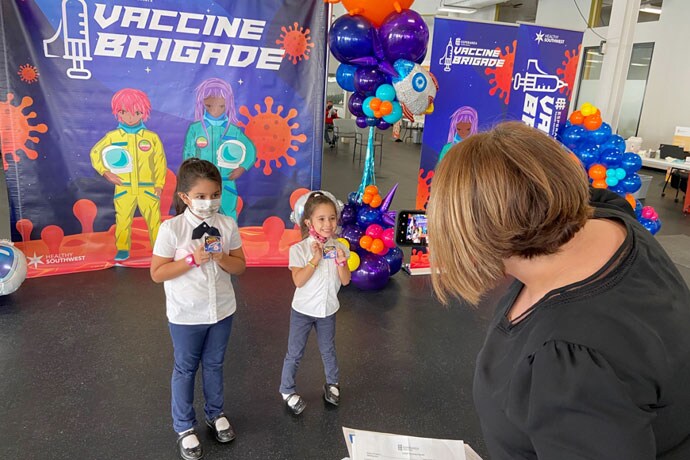 Maria Lopez takes a picture of her daughters, Alondra (left) and Victoria Macias, after the two elementary school-age girls got their covid shots Nov. 4 at Esperanza Health Centers’ mass vaccination site on the Chicago’s Southwest Side.

CHICAGO — As the medical assistant put on rubber gloves and readied the syringe, 5-year-old Victoria Macias, wearing a pink Minnie Mouse mask and white blouse, turned her head away and closed her eyes.

The medical assistant, Rachel Blancas, poked Victoria’s left arm for about a second. Victoria opened her eyes. And with that, the Macias sisters were among the first 5- to 11-year-olds to get the covid-19 vaccine in the Midwest’s largest city.

Their mom, Maria Lopez, took them out of school early last Thursday to stop by the mass immunization site on Chicago’s southwest side. “They have gotten every other vaccine available, so why not this one?” said Lopez, 43, a real-estate broker.

Esperanza Health Centers, a nonprofit health provider that is operating the site, has been the top pediatric covid vaccine provider in Chicago, according to the city’s Department of Public Health, administering about 10,000 immunizations to 12- to 17-year-olds. Now that the Food and Drug Administration has authorized the Pfizer-BioNTech shot for kids ages 5-11, the organization’s efforts may provide lessons for other places in the U.S. that have struggled to vaccinate children.

“People in the community trust us,” said Veronica Flores, manager of covid response for Esperanza, which has five medical clinics that see patients regardless of insurance or immigration status. “When the pandemic started, we were one of the first ones doing testing.”

At one point, she noted, Esperanza was responsible for more than half of all covid tests done in the city. The federally qualified health center’s patient population, which is about 90% Hispanic, has doubled in the wake of covid.

Everyone who works with patients at Esperanza is bilingual. The immunization site has extended hours and is open five days a week, including to people without appointments. The clinic will even pay for patients’ Uber rides to get vaccinated.

If parents or guardians have questions or concerns about the pediatric vaccine, Esperanza connects them to one of its doctors.

Dr. Mark Minier, pediatric medical director, seeks to reassure patients, telling them the shot, which is given at a lower dose than for teens and adults, has been found to be both safe and effective for 5- to 11-year-olds. The relatively mild side effects may include pain at the injection site, headaches and fatigue that could last a day or two. In addition, he reminds them that children are at risk from the virus.

“Around 2 million kids between 5 and 11 years old have been diagnosed with covid, and there’s been about 170 deaths,” Minier said. “That’s still too many. If we have something that can help prevent death or any sort of morbidity for kids for covid, then we should do it.”

Cynthia Galvan, a medical assistant at Esperanza who lives nearby, brought her 10-year-old son, Andres, to get the shot Thursday. She hopes it will ensure her family has a better Thanksgiving than last year, when several of her relatives were sick with covid-19.

Chicago’s vaccination rate of 58.2% for 12- to 17-year-olds is higher than the national average of about 50%, largely because of the work of community health centers like Esperanza, said city Health Commissioner Dr. Allison Arwady. Not only are they familiar with the local languages and cultures, but they’re also the type of places where the whole family is likely to get immunizations, starting with grandparents last winter.

“We know the biggest predictor of whether a child gets a vaccine is whether the parent or guardian is vaccinated,” Arwady said.

She still worries about the estimated 750,000 residents of the city without immunity to covid. Young Black Chicagoans have lagged behind other groups in getting the shot, and she’s concerned outbreaks could occur this winter among those unvaccinated networks.

“One way or another, your immune system is likely to learn its covid lesson and probably over the next few months,” Arwady said. “So either that’s through the safer way of getting vaccinated or taking your chance of getting infected.”

The city is working to increase vaccine uptake by offering $100 gift cards, administering free shots at home to anyone who wants them, and giving all public school kids the day off this Friday to get immunized.

Last week, Esperanza Health Centers texted the families of each of its roughly 8,000 patients ages 5 to 11 to let their parents know the vaccine was available. The organization started distributing the shots to younger kids Wednesday morning, just hours after the Centers for Disease Control and Prevention gave the final go-ahead. They will start giving out second doses in three weeks.

“I hate shots,” said Benicio Decker, 7, as he played a game on an iPad in the clinic’s waiting area Thursday. “The only time I like shots is when we get ice cream after.”

But the Chicago second grader said he was willing to withstand a little discomfort “because I want to protect my family, me, my friends, my teacher.”

On the brisk fall afternoon, families with young kids streamed in and out of the site, a 23,000-square-foot former gym with exposed ventilation, hanging fluorescent lights and a blue-speckled rubber floor. As Disney songs played over the loudspeakers, the children stopped to take pictures in front of astronaut-themed, balloon-covered photo backdrops the health center had set up.

“They do a great job of making information available where people are,” said Benicio’s mom, Esmie De Maria, 39. “They have flyers up at restaurants, laundromats, the grocery store. They’re not expecting people to come to them.”

De Maria said she didn’t run into waitlists as she had at other places in the city. She even enlisted the health center to teach vaccine workshops to her colleagues at a local neighborhood organization.

Esperanza is a trusted institution in a largely Hispanic part of the city, De Maria said — the health center’s name means “hope” in Spanish. In Chicago and nationwide, Latinos have been less likely than whites and Asians to be immunized against the coronavirus, though that gap has been closing.

“People of color have every right, historically, to be wary of vaccinations,” said De Maria, noting that many women in her ancestral home of Puerto Rico were coerced into being sterilized during the 20th century. “It’s embedded in our DNA to be skeptical.”

But she said she hopes everyone will consider getting immunized, for the good of the community. “This isn’t just for him,” she said, gesturing to Benicio.

Over at the vaccine station, Blancas, the medical assistant, told Benicio the shot would feel like a mosquito bite. “You’re being really brave. You’re earning that ice cream,” his mom said.

When Blancas stuck Benicio’s arm with the needle, the boy, holding tight to his Batman teddy bear, let out a quiet “Ow.” Afterward, he said he’d just felt a little pinch.

“You are officially vaccinated,” his mother told him, as he sat playing with her phone in the observation area for 15 minutes to make sure he didn’t have any dangerous allergic reactions. “He’s going to be one of the first kids at his school to get vaccinated. He’s a little superhero.”