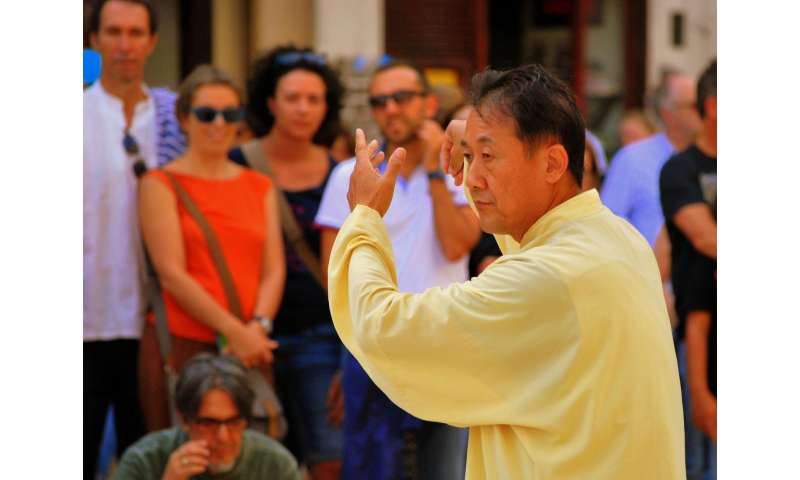 The fitness centers are closed and you can feel that cabin fever creeping in. Now it’s more important than ever to keep body and mind in balance—and in shape.

And we need to find ways to do that at home or close by.

Tai Chi, yoga and other forms of exercise and activity that emphasize conscious presence (body-mind activities) can be smart ways of replenishing ourselves.

“Both empirical data and research point in the same direction: namely, that exercise and movement that emphasize conscious presence have a beneficial effect on our health,” says Berit Østerås, a physiotherapist and university lecturer at NTNU’s Department of Neuromedicine and Movement Science.

She explains that ‘exercise and movement with a conscious presence’ means turning your attention more inward than outward. With intention, you observe your contact with the ground, your breathing and other responses or movements in your body and mind, but without involving them.

“In other words, you assume an observant attitude, as ‘captain of your ship.” This enables conscious and appropriate choices and adjustments along the way,” says Østerås.

These types of activities are beneficial on several fronts, for both body and mind.

“They increase concentration and enable you to carry out the movements in the most appropriate and present way possible. This allows each person to reap what is most beneficial for them. For some people, the greatest benefit will be to become more consciously present so that they feel what they actually need, like a type of self-care,” says Østerås.

Some individuals find that what they need most is to regulate their stress and tension, which is often related to emotions.

And for others, building up certain physical qualities, like strength, coordination, balance, or agility, is the goal.

In an article on the health website Norsk Helseinformatikk AS (Norwegian Health Information), Karlsen says:

“Some people call it meditation in motion, or medicine in motion, but it’s a Chinese martial art that originated 700-800 years ago. Tai Chi has evolved into a form of training that we do today primarily for the sake of health. Tai Chi helps you train your coordination, balance and body movement. The idea is to balance your body awareness with mental awareness. “

Win-win effect for body and mind

“It seems that training our conscious awareness leads to rejuvenation where it’s needed, in other words, to restore the balance between our body and our mind. This can be subjectively experienced and expressed as reduced pain, stress, fear and anxiety, but it can also be observed as objectively detectable changes in the brain and body,” says Østerås.

Thus, a very favorable interaction can occur for our body-mind and create a win-win effect.

However, Østerås emphasizes that since so many mechanisms and individual factors are involved for each person, and they change over time, you can’t necessarily predict the effects and health benefits for any given individual.

Several studies have been conducted that investigate the effects of various body-mind activities and movements.

“Mindfulness practice involving conscious movements and increased awareness of the movement of energy in the body have been shown to be associated with lower stress, positive affect and higher levels of dopamine,” says Østerås.

Dopamine is important for controlling volitional movements, but it is also important as a “reward system” in the brain. Fun activities lead to an increased release of dopamine in certain parts of the brain.

“Several effects can also be observed following mindfulness practices, such as improvements in balance and movement control,” she says.

Interoceptive signals are sensations that are projected from the body to the brain via a variety of neural pathways, and that allow us to understand internal bodily states. Faulty links between the body’s signals and the brain’s interpretation of them have been suggested as an underlying cause of some mental disorders.

Healing this mismatch or misinterpretation can result in an improved ability to adapt in stressful situations.

The athletes had lower levels of alexithymia, which is the inability to identify or describe one’s feelings. The participants were able to be in better touch with and understand their emotions and their bodies’ needs. They became more connected to their own bodies and emotions.

Effect of Tai Chi versus physical therapy for osteoarthritis

Østerås wrote a commentary on a study in the Journal of Physiotherapy that compared the effect of Tai Chi with physical therapy for knee osteoarthritis: Similar benefits from Tai Chi … rvised physiotherapy.

The study was conducted at an academic tertiary care hospital in Boston, U.S..

The randomized study included female and male participants in their 40s with knee osteoarthritis. The participants were selected on the basis of certain criteria, described in the study.

Patients with osteoarthritis of the knee are recommended to exercise to cope with pain and are often referred to physiotherapy for help and guidance. Two different exercise interventions were evaluated in the study: Tai Chi and physical therapy. Although previous studies have documented the beneficial effects of exercises in this patient group, there is no consensus on the type and dose of exercises that are the most effective for patients with long-term knee pain diagnoses.

The study concluded that Tai Chi and physiotherapy were equally effective in patients with knee osteoarthritis. However, the Tai Chi group showed greater improvements in depression and in one component of quality of life, aspects that can be crucial for long-term health and well-being, Østerås wrote.

The goal of Tai Chi is to strengthen the body and the mind by increasing one’s strength, agility and inner harmony.

Tai Chi is widespread in China, and most of the population shares the notion that exercise has a positive effect on body and mind. Among other things, it is common to practice Tai Chi in parks in the morning, alone or in groups, before the work day starts.

Due to the many health benefits it is believed to confer, Tai Chi has spread to large parts of the world, including Norway. Today, more than 250 million people are estimated to practice this martial art worldwide.

The martial art is often practiced as therapy to improve health, especially for musculoskeletal disorders, and to increase longevity and quality of life by experiencing less stress.

No one knows for sure when Tai Chi originated, but the martial art may have roots as far back as the 13th century. Around the 1600s, the techniques were compiled into the Chen style, from which most of today’s styles have evolved.

Five main Tai Chi styles exist, all of which are called by the family names of the people who developed them: Chen, Yang, Wu, Sun and Wo Hao.

Tai Chi is performed using carefully defined, fluid and slow movements, often combined in specific patterns. To force an opponent off balance, practitioners use their own softness and the opponent’s own energy against them.