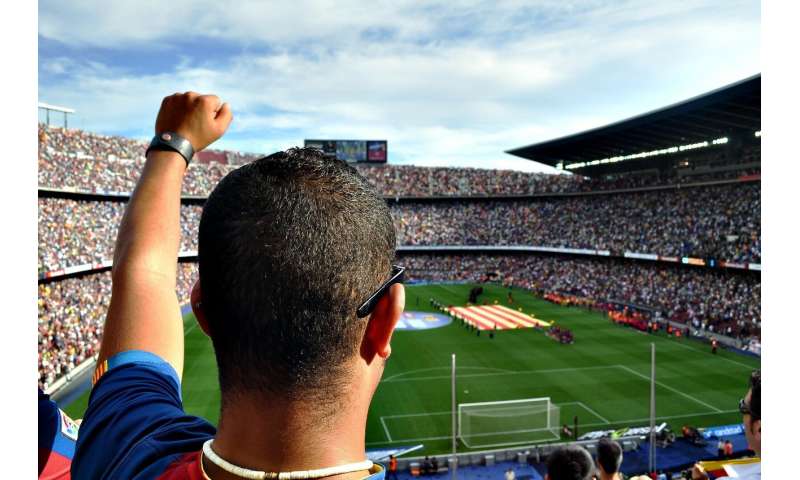 People tend to be irrationally optimistic about the future success of their sports team or political party, while supporters of their rivals hold similar overly positive views about the performance of their own group, a new study from Oregon State University has found.

“People hold biases about their own groups that lead them to believe good things are more likely for their team or party,” said Colleen Bee, an associate professor in OSU’s College of Business and one of the paper’s authors. “But the rival group also believes this about their team or party. These distorted and diametrically opposed points of view can lead to tension among rival groups, as we see in today’s political and sports worlds.”

The research, published recently in the European Journal of Social Psychology, shows that these biases are based on close affiliations people have with certain groups and these groups are an important part of how they define themselves. Previously, these biases have only been observed at the individual level.

The findings have practical implications for intergroup relations such as conflict resolution and negotiation as well as for communications strategies for group-related entities such as workplace organizations, sports teams or rival brands, said Bee, whose research interests include sports marketing and consumer behavior.

Generally, at the individual level, people evaluate others based on what they have done in the past, but when they evaluate themselves, they are more likely to consider their future aspirations. People see themselves as more capable of change than they do others, said co-author Jesse King, who previously worked at OSU-Cascades and now is on the faculty at Weber State University.

“You know what you intend to do, but you don’t have access to the same internal cognitions when considering others,” he said.

Given that group membership is an important part of how individuals define themselves, King and Bee wanted to better understand whether people’s individual biases extend to the groups they affiliate with, even though group members don’t have access to the internal thinking of a political party or a sports team.

The first study, conducted with students at Oregon State University and the University of Oregon, explored how people assess the future of their football team or their rival’s team. Participants were asked to consider how much of their team or their rival’s success is explained by what the team has done in the past, how the team is at the moment, or what the team will accomplish in the future.

The study found that people think about their own team as existing in the future, but a rival team as more tied to the past.

Participants in the first study also were asked to envision when the next “good” or “bad” season would occur. The findings revealed that people were optimistic about their team relative to a rival team.

“People think their team will win sooner and lose later than the rival team, irrespective of historical past performance,” Bee said. “And rival supporters make the same estimates about their own team.”

In the second study, the researchers focused on fictional lacrosse teams that had never competed. Again, the results showed that participants were more optimistic about the future of their own team over their rival, regardless of feedback indicating one team was likely to do better.

In the third study, researchers looked at political affiliation to see if the observed effects also extend to non-sports contexts.

The researchers surveyed Democrats and Republicans prior to the midterm election in 2018, asking them to evaluate one of the two political parties. Some evaluated the party they belonged to, while others evaluated their rival party. Again, the participants indicated they were more optimistic about their own party and its chances in the upcoming election than the other party’s chances.

Understanding how people see their group and their rival could provide insight for people engaged in group-related mediation or developing political messaging, she said. Politicians might think about speaking to supporters one way and undecided voters another, for example.

The first step is identifying the scope and effects of group-level biases. The researchers did not look at ways that biases might be reduced, Bee said.