Table for one? Ladies who lunch eat more calories than those dining solo, study finds

Women take in 150 extra calories per meal on average when eating with their friends, a study has found. In one lab experiment, 26 women spent three days eating every meal with a friend, and three eating alone. They ate an average of 540 calories extra over the three days they had a companion.

A second experiment, involving 63 women, found those who overeat socially do not eat less later, leaving the average woman at risk of gaining 4kg (8.8lbs) a year if they eat at least one meal a day with others.

People may overeat because friendly conversation distracts them. But experts also believe we may have evolved to eat more in groups, as that was the only way to guarantee a fair share in our hunter-gatherer days. 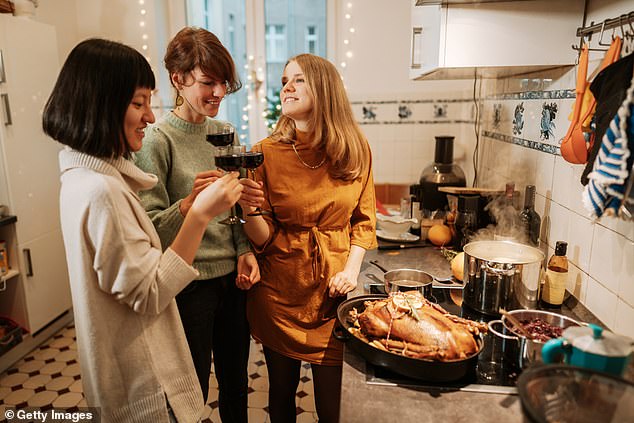 Women take in 150 extra calories per meal on average when eating with their friends, a study has found

Professor Suzanne Higgs from the University of Birmingham, author of the study published in the journal Appetite, said she would ‘expect the same effect in both sexes’.

She said: ‘People should be aware that social eating, even just a quick lunch with friends, is likely linked to eating more.

‘Although this research looked only at women, we expect the same effect in both sexes.

‘The advice from this study is not to stop eating with friends, or eat every meal alone, but maybe to plan in advance and order a healthier option off the menu, so it is less important if you overeat.

‘When having friends over for a dinner party, giving yourself a fixed portion, so you cannot keep serving yourself more without thinking, might be a good strategy.

‘Alternatively, people could just make up for the extra calories they get from eating with friends by eating smaller meals beforehand or afterwards.’