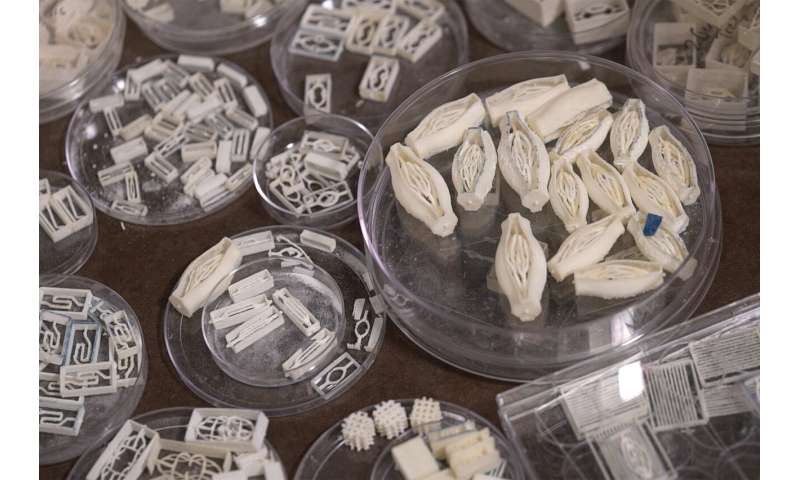 Powdered sugar is the special ingredient in a Rice University recipe for mimicking the body’s intricate, branching blood vessels in lab-grown tissues.

“One of the biggest hurdles to engineering clinically relevant tissues is packing a large tissue structure with hundreds of millions of living cells,” said study lead author Ian Kinstlinger, a bioengineering graduate student in Rice’s Brown School of Engineering. “Delivering enough oxygen and nutrients to all the cells across that large volume of tissue becomes a monumental challenge.”

Kinstlinger explains that nature solved this problem through the evolution of complex vascular networks, which weave through our tissues and organs in patterns reminiscent of tree limbs. The vessels simultaneously become smaller in thickness but greater in number as they branch away from a central trunk, allowing oxygen and nutrients to be efficiently delivered to cells throughout the body.

“By developing new technologies and materials to mimic naturally occurring vascular networks, we’re getting closer to the point that we can provide oxygen and nutrients to a sufficient number of cells to get meaningful long-term therapeutic function,” Kinstlinger said.

The sugar templates were 3-D-printed with an open-source, modified laser cutter in the lab of study co-author Jordan Miller, an assistant professor of bioengineering at Rice. 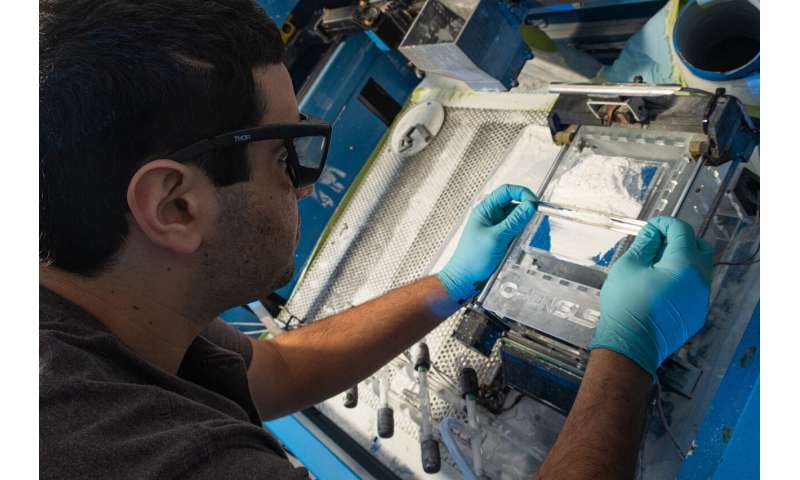 “The 3-D-printing process we developed here is like making a very precise creme brulee,” said Miller, whose original inspiration for the project was an intricate dessert.

Miller said the complex, detailed structures are made possible by selective laser sintering, a 3-D-printing process that fuses minute grains of powder into solid 3-D objects. In contrast to more common extrusion 3-D printing, where melted strands of material are deposited through a nozzle, laser sintering works by gently melting and fusing small regions in a packed bed of dry powder. Both extrusion and laser sintering build 3-D shapes one 2-D layer at a time, but the laser method enables the generation of structures which would otherwise be prone to collapse if extruded, he said.

“There are certain architectures—such as overhanging structures, branched networks and multivascular networks—which you really can’t do well with extrusion printing,” said Miller, who demonstrated the concept of sugar templating with a 3-D extrusion printer during his postdoctoral studies at the University of Pennsylvania. Miller began work on the laser-sintering approach shortly after joining Rice in 2013.

“Selective laser sintering gives us far more control in all three dimensions, allowing us to easily access complex topologies while still preserving the utility of the sugar material,” he said.

Sugar is especially useful in creating blood vessel templates because it’s durable when dry, and it rapidly dissolves in water without damaging nearby cells. To make tissues, Kinstlinger uses a special blend of sugars to print templates and then fills the volume around the printed sugar network with a mixture of cells in liquid gel. The gel becomes semisolid within minutes, and the sugar is then dissolved and flushed away to leave an open passageway for nutrients and oxygen.

“A major benefit of this approach is the speed at which we can generate each tissue structure,” Kinstlinger said. “We can create some of the largest tissue models yet demonstrated in under five minutes.”

Miller said the new study answers two important questions: What sugars can be sintered into coherent structures, and what computational algorithms can derive complex, branching architectures that mimic those found in nature?

The computational algorithm that generated the treelike vascular architectures in the study was created in collaboration with Nervous System, a design studio that uses computer simulation to make unique art, jewelry and housewares that are inspired by patterns found in nature.

“We’re using algorithms inspired by nature to create functional networks for tissues,” said Jessica Rosenkrantz, co-founder and creative director of Nervous System and a study co-author. “Because our approach is algorithmic, it’s possible to create customized networks for different uses.”

After creating tissues patterned with these computationally generated vascular architectures, the team demonstrated the seeding of endothelial cells inside the channels and focused on studying the survival and function of cells grown in the surrounding tissue, including rodent liver cells called hepatocytes. The hepatocyte experiments were conducted in collaboration with University of Washington (UW) bioengineer and study co-author Kelly Stevens, whose research group specializes in studying the delicate cells, which are notoriously difficult to maintain outside the body.

“This method could be used with a much wider range of material cocktails than many other bioprinting technologies,” Stevens said. “This makes it incredibly versatile.”