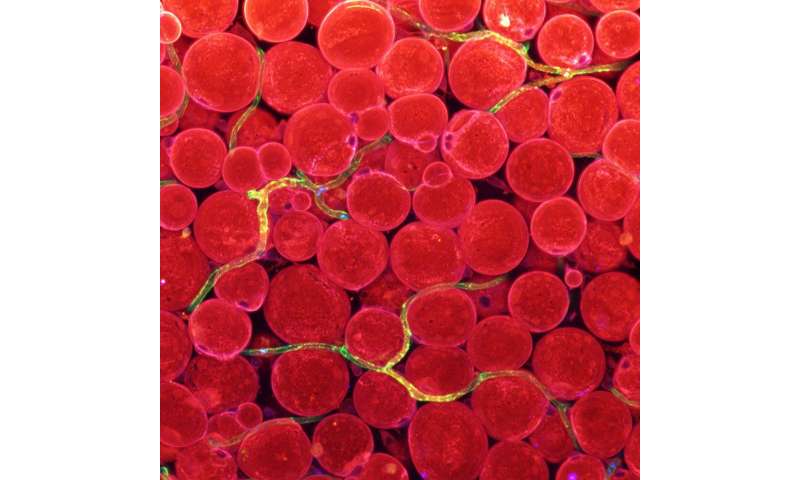 Can obesity define health? It is a question for much debate. Still, obesity is generally classified into metabolically healthy obesity (MHO) and an unhealthy version of obesity. As we grow older, we tend to put on excess fat more around the waist than the hips and legs with aging, becoming more “apple-shaped” than “pear-shaped” and also at a greater risk of metabolic syndrome. As fat accumulates around our abdominal organs, instead of under the skin where most of our body fat usually sits, this visceral fat releases fatty acids and inflammatory substances directly into the liver, causing toxicity and insulin resistance. People with MHO, meanwhile are characterized by favorable health parameters, including high insulin sensitivity, no signs of hypertension, and less inflammation, and a healthier immune system.

It is undeniable that where body fat sits matters for health, but little has been known about what mechanism determines whether we have the pear shape or the apple shape. Led by Dr. KOH Gou Young at the Center for Vascular Research, within the Institute for Basic Science (IBS), South Korea, scientists have reported Angiopoietin-2 (Angpt2) – a hormone secreted from fat tissue, previously known as a protein coding peptide involved in embryonic vascular development—as a key driver that inhibits the accumulation of potbellies by enabling the proper transport of fatty acid into general circulation in blood vessels, thus preventing insulin resistance. Their findings have been published online in the journal Nature Communications (12 June 2020).

“Previous approaches blocked the expression of Angpt2 in the whole circulatory system with pharmacological interventions to inhibit displaced fat accumulation that leads to metabolic disorders. Though the vascular endothelial cell is the anatomic and metabolic gatekeeper of fat shuttling into tissues, it has still remained uncertain whether the displaced accumulation of excess fat in fat tissues is a cause or an indicator of metabolic syndrome. We specifically focused on the fatty acid shuttling in the specific fat tissues under the skin. Angpt2 is found to play a key role in packing on fat on proper locations where they should be to contain wider waistline,” says BAE Hosung, the first author of this study. 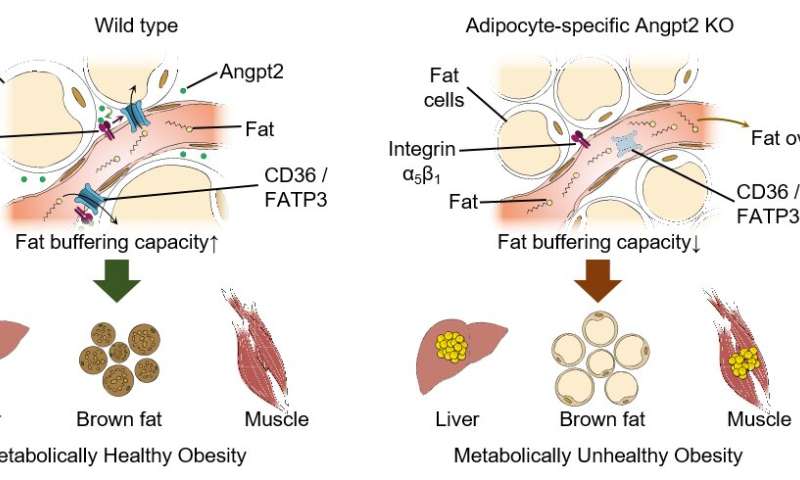 Noting that the blood vessels under the skin are home to certain fatty acid transport proteins, the researchers compared samples from MHO and metabolically unhealthy obese individuals. Angpt2 turned out to be the single potential candidate for sustaining metabolic health via regulation of body fat distribution. Through various tissue-specific knock out mouse models and mechanistic studies in primary cultured cells, they revealed Angpt2 produced from fat cells interacts with its receptor integrin α5β1 to drive fatty acid transporters and ensure normal distribution of circulating fat. “Intriguingly, Angpt2-integrin α5β1 signaling took just few minutes. This near-instant processing makes sense since this biological mechanism should cope with the surge of fat levels in the blood after a meal,” explains Bae. 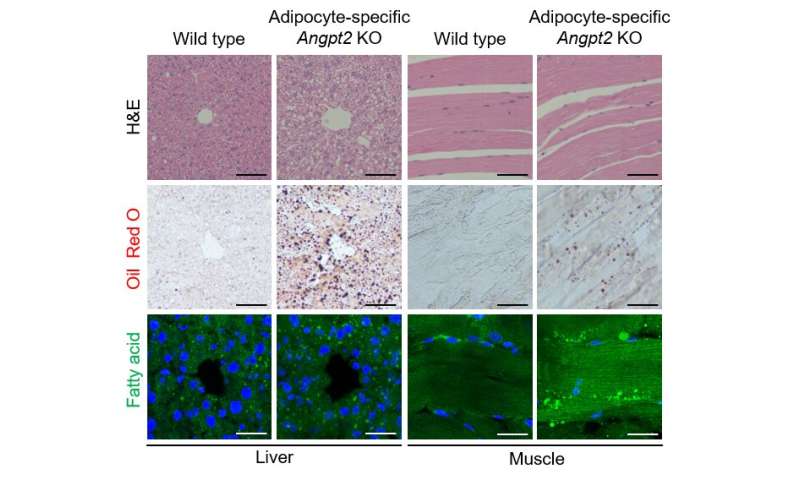 The inhibition of this process triggered fat accumulation in other fat depots and abdominal organs, leading to systemic glucose intolerance, which is reminiscent of the pattern in metabolically unhealthy obese patients.