Magic mushrooms could be the key to helping heavy drinkers quit alcohol, a study has suggested — after almost half of those treated with the drug swore off drinking entirely eight months later.

Researchers led by New York University tracked 93 people given either psilocybin — the active part of magic mushrooms — or a placebo twice in two months. Those in the test group were twice as likely to give up drinking, and 83 percent more likely to stop drinking heavily.

About one in 12 men and one in 25 women are thought to have alcohol use disorder in America, where they are unable to stop themselves from drinking despite adverse social, career or health consequences. An estimated 95,000 people die from alcohol-related causes annually, the National Institutes of Health says, making alcohol the third-leading preventable cause of death in the United States.

But despite its prevalence, America is struggling to help alcoholics, with low success rates from therapy or support groups such as Alcoholics Anonymous and many avoiding medications like naltrexone due to unpleasant side-effects including nausea and exhaustion.

But studies are beginning to suggest magic mushrooms could help, with researchers suggesting to DailyMail.com that the psychoactive drugs may ‘jolt’ the brain out of ‘dependent and unhealthy habits.’ 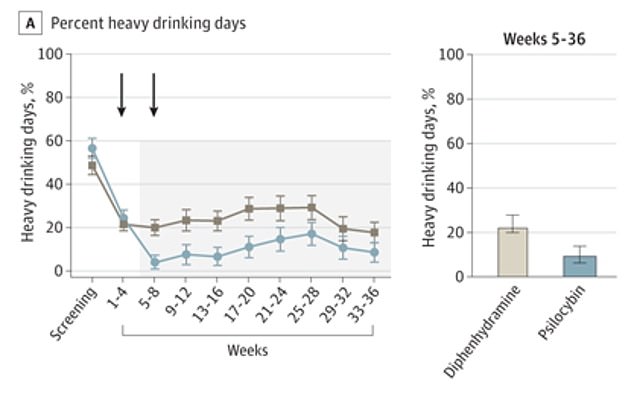 The above graph shows the proportion of heavy drinking days per week on average in the group receiving the magic mushroom extract (blue line) and the placebo (brown). It reveals that the results for the magic mushroom group were lower. They also got 12 therapy sessions

In the study — published this week in the journal JAMA Psychiatry — researchers monitored Americans who had been dependent on alcohol for about 14 years.

Dependence was defined using an official survey, which asked people if not drinking gives them withdrawal symptoms, like shaking, or if they had previously tried to cut down on drinking but failed.

Participants also drunk heavily most days, with men reporting that they typically had more than five drinks a day and women had four, and drunk seven drinks a day on average.

Psilocybin is one of several psychedelic drugs that have recently reemerged from the shadows with promises to treat mental illnesses and addictions.

Portrayals in stone carvings and rock paintings that predate recorded history suggest people discovered the hallucinogenic powers of ‘magic’ mushrooms as early as 9000 BC.

The fungi were once the center piece of religious ceremonies.

In 1959 a chemist at the pharmaceutical company Albert Hofmann identified and separated out the psychoactive compound in mushrooms, known as psilocybin.

Between 1961 and 1965, Sandoz sold the compound as a psychotherapeutic medicine called Indocybin.

It was quickly discontinued when it was widely misused to ‘trip’ or hallucinate.

Psilocybin has since been tightly regulated in the US where it is treated as equally illicit to heroin.

Fresh, but not dried, magic mushrooms were legal in the UK until the Drugs Act 2005 made them Class A.

But as depression continues to surge, scientists are looking for inventive options to treat the disorder.

Psilocybin is a similar shape to the ‘feel good’ neurotransmitter serotonin and binds to some of the same receptors in the brain.

It appears in brain scans to treat depression by making the amygdala more responsive to emotions.

And patients are better able to process these feelings and feel relief from their symptoms weeks later.

Participants were between 25 to 65 years old, and recruited at two sites in America. None were using other drugs or hallucinogens, such as LSD.

They were split into two equal groups, with half receiving psilocybin in tablets and the others receiving the placebo diphenhydramine — an antihistamine.

They were offered one talk therapy session a week for the first 12 weeks of the study, and given the drugs at weeks four an eight.

On medication days, they were given the pills around 9am and then monitored for eight hours. During this period, they were asked to lay on a couch wearing eyeshades and headphones playing a standardized list of music.

Participants were followed for up to eight months, and asked to report how often they were drinking heavily and if they had stopped drinking.

Those who claimed to have stopped drinking had their fingernails tested to confirm the assertion. Nails provide a record of daily activities because as they grow every day they pick up chemicals from the body — including that from alcohol.

Results showed that after their first session with magic mushrooms 11 of 48 people gave up alcohol (23 percent). But in the eighth month of the experiment this rose to 23 people (or 48 percent).

For comparison, in the group that got the placebo just 11 (24 percent) said they had quit alcohol by the final month.

In terms of heavy drinking, 30 participants in the magic mushroom group (62 percent) said they had stopped the habit by month eight. Whereas in the placebo group this reached 18 (40 percent).

Participants made it to 11 of the 12 therapy sessions they were offered, on average, and none suffered any adverse effects.

Dr. Michael Bogenschutz, the psychiatrist who led the study, said the results ‘strongly suggest’ that psilocybin could help treat alcohol use disorder, and that it may also be useful in helping people quit smoking, cocaine or other opioids.

‘It seems that psilocybin treatment can jolt the brain and the mind out of entrenched, unhealthy patterns of thought, emotion and behavior,’ he told DailyMail.com.

‘Psilocybin enhances neuroplasticity, the capacity of the brain to change and reorganize itself.

‘In the context of addiction treatment, if there is a desire to change and therapy to support that change, psilocybin may enhance the ability to learn new ways of thinking, feeling and behaving which overwrite the old patterns and sustain recovery.’

He added: ‘The powerful and meaningful experiences that many patients have with psilocybin may play an important role by creating powerful memories of new ways of thinking, feeling and being in the world.

‘Many patients have reported a marked decrease in craving for alcohol and an enhanced sense of connectedness.’

Scientists noted that despite the trial being ‘double-blind’ — meaning patients did not know whether they were getting the drug — it was ‘obvious’ who was receiving the magic mushrooms because of their notable mood altering effects.

They said this could have effected the results by making those in the control group less likely to quit alcohol.

Magic mushrooms are illegal in the United States, and carrying them could result in an up to $10,000 fine and decades in jail.

They are taken orally and have an impact within 20 minutes, leaving some users struggling to tell the difference between fantasy and reality.

Negative impacts include nausea, vomiting and muscle weakness — but in serious cases they could also cause panic attacks and psychosis.