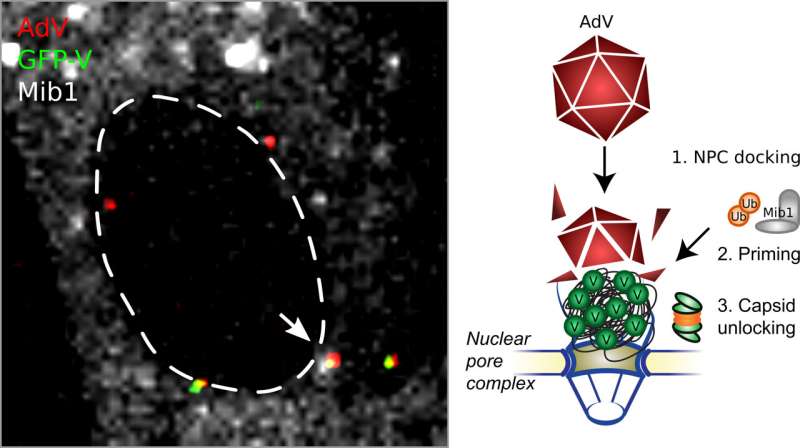 Adenoviruses have a linchpin protein that stabilizes their DNA until it reaches the infected cell’s nucleus. The protein then detaches from the viral genome, and the virus uncoats. Only then are the genes released into the nucleus, which is necessary for the production of new viruses. This process, discovered by researchers at the University of Zurich, is a key for effective functioning of various COVID-19 vaccines.

Adenoviruses cause respiratory illnesses in humans and have been used as vectors in vaccination for many years, for example against MERS and Ebola virus. Several COVID-19 vaccines are based on replication-defective adenoviruses, including products from AstraZeneca, Johnson & Johnson, CanSino Biologics and Sputnik V. The vaccinated cells produce the SARS-CoV-2 spike protein on their surface, and thereby trigger a protective immune response in the human body.

Researchers are exploiting a key feature of adenoviruses, namely their ability to infect human cells and transfer foreign DNA into the nucleus of these cells. A new study led by Urs Greber, professor at the Department of Molecular Life Sciences at the University of Zurich (UZH) now shows that this process evolved a sophisticated mechanism. “The viral protein V plays a key role. It connects the DNA with the protein coat surrounding the genome. Protein V increases the stability of the virus particle outside the cell, and also in the cytoplasm of the infected cells,” explains Greber.

The protein coat prevents the cell from recognizing the invading foreign DNA and activating the alarm systems. Once the virus particle reaches the nuclear pore complex—the gateway into the nucleus—the viral DNA is released into the nucleus, where the genetic information is read by the cell’s machinery, resulting in the relevant proteins being produced. In COVID-19 vaccines, the cells produce the spike protein on the coronavirus’s surface. Presenting the viral protein on the outside of the cell then triggers the immune response in the human body.

The UZH scientists have shown that an adenovirus that is missing the protein V is not only less stable than regular adenoviruses, but also releases its DNA prematurely, before reaching the nuclear pore complex. “This reduces infection and triggers reactions activating the immune system,” says Greber. Too much of these reactions triggers inflammation. Notably, both vector-based and mRNA vaccines against coronavirus require just the right amount of these reactions to induce a strong immune response.

In vector-based vaccines the protective protein coat around the DNA enables the particle to reach the nuclear pore complex, where the viral DNA is released. This “uncoating” is absolutely essential for nuclear import, and success in vector-based vaccination, since the nuclear pore complex prevents large virus particles from invading the nucleus. “We were able to demonstrate that the protein V uses the activation by a cellular enzyme named Mind bomb 1, which changes its features and leads to the disruption of the protein coat. The enzyme thereby initiates the nuclear import of the viral DNA genome,” says Greber.

To demonstrate this key function of Mind bomb1, the researchers used regular adenoviruses to infect human cells that lacked Mind bomb 1, as well as a virus mutant containing protein V, which cannot be modified by this enzyme. In both cases, nuclear import of the viral DNA was defective and the virus particles clustered at the nuclear pore complexes. In other words, the viral infection was stopped.