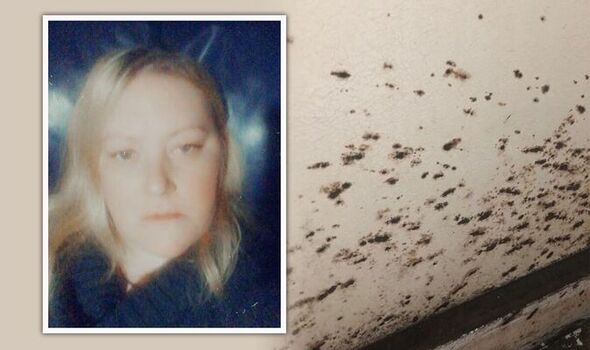 A woman whose flat is “covered in black mould” has told of how she fears it will eventually kill her, having been in and out of hospital “so many times that she’s lost count”.

Emma Brankin, 45, has asthma which she claims was under control before she moved into her current home in 2009. But since then she has suffered repeated problems with her lungs, including pleurisy, pneumonia and interstitial lung disease.

Emma has been rushed into intensive care three times since 2019. And last month she developed a chest infection which sparked an asthma attack so severe her next of kin were called. Doctors then put her in an induced coma and on a breathing machine for a week to nurse her back to health. But she had to go back into hospital two days later after she suffered another attack.

Her doctors say the mould in her flat is making her problems worse and are now demanding that she is moved to another home for the sake of her health.

Emma told CoventryLive about her situation following the inquest into the death of two-year-old Awaab Ishak in Rochdale, who died after mould in his Rochdale home was not treated.

The toddler’s death has since led to a social housing boss being fired amid widespread condemnation, including from Housing Secretary Michael Gove, who has written to all councils and social housing providers in England saying the country needs to ‘raise the bar dramatically’ on the quality of social housing.

Emma said: “It’s affecting my life really badly. I’ve been in hospital that many times since 2019, I couldn’t give you a number, I’ve actually lost count. But now it’s putting me repeatedly in intensive care. This has been my life for the last year. It’s in my bedrooms, in my son’s old room, it’s along not the window frame but the panel in front of it, it’s all thick black.

“On my outside, inside and when I’ve got my window open fully it’s black. My air vents have got mould in them, the ceiling in my bedroom and going down the side of the wall in my bedroom is mouldy.”

Emma claims she is not the only resident in her block of flats that has problems with mould and that landlord Citizen Housing is not doing enough to tackle the problem.

She said: “But it’s not just about me, even when I get a move from here this block needs to be sorted. There’s not a day or a week that goes by when somebody in the block isn’t ill with their chest. Myself and other people in my block have repeatedly reported the mould and damp problem in our block. I’ve asked our housing officer and I was fobbed off with ‘oh it’s poor ventilation’ yet I have every single window in my flat bar one open at this time of year.”

“They just come up with different excuses – poor ventilation, or you’ve got a tumble dryer, or this or that. They just fob everybody off and say it’s our responsibility to clear the mould up but I’m not being funny it’s not. How are you supposed to clean it up when just sitting in the flat or in the building causes you to have life-threatening asthma attacks?”

“We are working closely with the resident at the second property to gain access to resolve the problem. A member of our asset management team has inspected the communal areas of Jardine Crescent today and the roof of the emergency fire escape does have a small amount of mould that we will be cleaning, treating, and then covering with PVC material that will make it easier to clean in the future.

“We will also be installing ventilation into the storage area to prevent the build-up of mould. All of our blocks and communal areas, used on a daily basis by our residents, are regularly inspected and cleaned.

“Following the Housing Ombudsman’s Damp and Mould report in Oct 2021 we have taken a strategic approach when it comes to tackling damp and mould.

“Based on the Ombudsman’s recommendations we’ve analysed our properties to identify those most likely to be affected, carried out work and repairs to reduce incidents, used new software to help us target poorly insulated homes, continued to upgrade heating systems, and set up a dedicated damp and mould team who respond to repairs that are specific to this issue.

“We do rely on customers reporting specific problems so that we can respond quickly, this is especially important if there is damp and mould in the property. If any of the residents at Jardine Crescent, or in any other Citizen properties are currently experiencing issues with damp and mould, please get in touch and we will investigate further.”