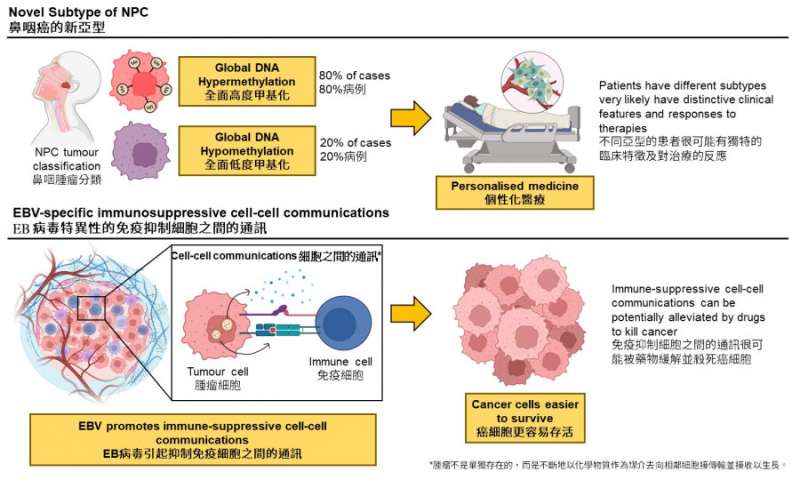 Researchers from the Department of Clinical Oncology, School of Clinical Medicine, LKS Faculty of Medicine, The University of Hong Kong (HKUMed) discovered a novel subtype of Epstein-Barr virus (EBV)–positive nasopharyngeal carcinoma (NPC) and EBV-associated immunosuppression in the tumor-microenvironment (TME).

These findings have provided novel insights into the traditional NPC pathogenesis model and highlights EBV-specific communications in the TME as potential therapeutic target in NPC. The research has been published in eBioMedicine.

NPC has a high incidence rate in Southeast Asia, in particular Guangdong and Hong Kong. Due to its worldwide rarity, studies on NPC heavily rely on local research teams, and its pathogenesis mechanism remains largely unclear.

In Hong Kong, NPC is the most common cancer type for the men aged 20–44 and ranked 8th highest incidence rate among males. Strikingly, EBV is detected in 95% of the Hong Kong cases. Having thorough understanding of NPC pathogenesis, in particular the role of EBV, is critical for advancing the clinical diagnosis and treatment for this deadly disease and is an active research topic in the field.

The research team used a cutting-edge bioinformatics approach to comprehensively decode the epigenetics of the tumors dissected from NPC patients. EBV+NPC was believed to be massively dysregulated by the global DNA hypermethylation, a phenomenon that denotes a large-scale increase of methyl groups onto the DNA sequences within the cancer cells.

These methyl-groups function like an “off-switch” to inactivate tumor-suppressors that safeguard the cells from turning into a tumor, and thereby, promoting tumor development. Moreover, global DNA hypermethylation is rarely observed in non-EBV cancer types proposed to be associated with EBV and is a critical step in NPC pathogenesis.

“Commonly infected by EBV, the NPC tumors carried distinctive methylation patterns. This finding is not well-recognized by the NPC development model. When global DNA hypomethylation occurs during NPC pathogenesis, whether it occurs as an alternative pathway in a subset of patients and its potential of predicting patients’ survival, clinical features, and response to therapies are critical for understanding NPC and providing personalized treatments for patients,” said Dr. Dai Wei, Assistant Professor of the Department of Clinical Oncology, School of Clinical Medicine, HKUMed.

Professor Maria Li Lung, Emeritus Professor of the Department of Clinical Oncology, School of Clinical Medicine, HKUMed, added, “Since the immunosuppressive cell-cell communications were associated with EBV, these communications are highly-specific to the tumors and could be potential therapeutic targets and biomarkers in NPC.

“We are now designing experiments to explore this feasibility and understand the clinical impacts of NPC subtypes. We hope the work can be beneficial to NPC patients in Hong Kong.”