Pancreatic cancer is mostly diagnosed in those aged between 85 to 89 years old, according to Cancer Research UK. Sadly, the survival rate hasn’t shown much improvement in the past 40 years with less than five in 100 people diagnosed with the disease surviving for five years or more. What’s the sign in the loo that may indicate you have it?

If you notice stools that are large, pale, oily, floating and smelly you may have steatorrhoea.

Steatorrhoea is a common symptom of disease of the pancreas, according to Pancreatic Cancer UK. The charity explains: “It happens because the cancer affects the production of the enzymes needed to digest food, particularly high fat food. Undigested food passing quickly through the body can also cause diarrhoea and subsequent weight loss.”

Additional symptoms of mild steatorrhea include:

But steatorrhoea can be caused just by eating high fat foods and drinks.

Common foods and drinks known to cause steatorrhea include:

When undigested food passes quickly through the body, it can also cause diarrhoea and subsequent weight loss.

As pancreatic cancer grows, different symptoms may appear depending on where the cancer is in the pancreas: the head, body or tail. 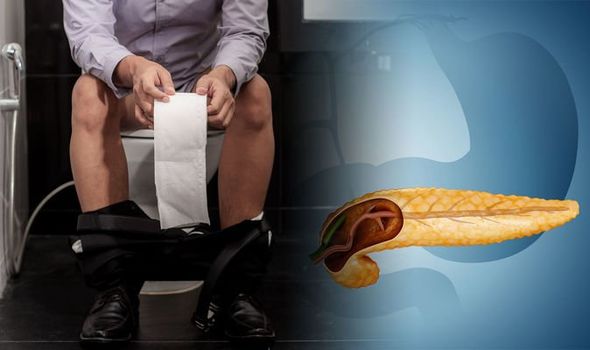 In total, the pancreas is about six inches long and shaped like a leaf. It lies across your body where your ribs meet at the bottom of your breastbone, just behind your stomach.

Although symptoms of pancreatic cancer do not appear until the cancer has grown large enough to cause problems, here are a list of signs to be aware of, as pointed out by Pancreatic Cancer UK:

This makes sense because of where the pancreas is located within the body, with the cancer affecting nearby nerves or organs.

The charity reports that pain is a symptom in around 70 percent of pancreatic cases. It says: “It often starts as general discomfort or pain in the abdomen (tummy) that can spread to the back.

“It can be worse after eating or when lying down. Sitting forward can sometimes relieve the pain. At first the pain may come and go, but over time it may become more constant.”

Appearing in about 50 per cent of all pancreatic cancer cases, jaundice – when the skin and whites of the eyes turn yellow – appears when there is a build-up of bilirubin in the blood. 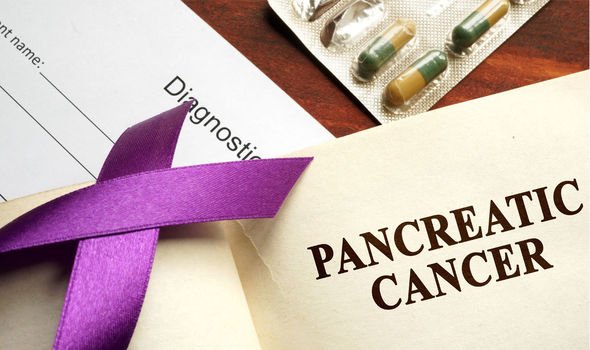 Usually, bilirubin – a natural by-product of red cells breaking down – is removed from the body with the help of the bile duct, which can be blocked by the cancer. This is known as obstructive jaundice.

New, unexplained and persistent dyspepsia (indigestion/heartburn) can be a symptom of pancreatic cancer, particularly in older people.

If these symptoms do appear, do contact your local GP centre to book an appointment to see a healthcare professional.

Cancer Research UK has some tips to get the most out of your meeting with the GP. These include: 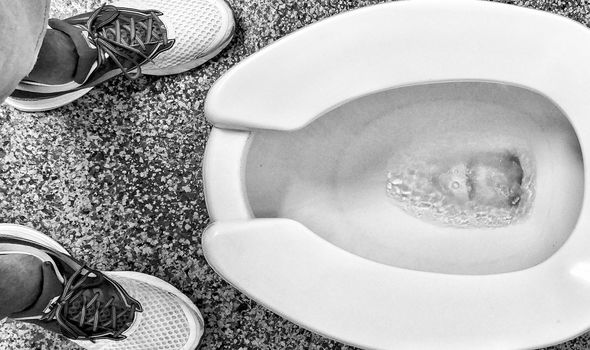 If you would rather see a male or a female doctor it’s worth asking when you book the appointment.

The symptoms above for pancreatic cancer can also be symptoms of other health conditions the doctor may want to rule out first.

Remember, it’s always better to be safe than sorry.