While the severe acute respiratory syndrome coronavirus 2 (SARS-CoV-2) has spread rapidly and extensively throughout the world, its impact has been uneven. At present, it is estimated that about 50% of the world’s people are immune to the virus as a result of natural infection or vaccination; however, the occurrence of breakthrough infections has raised questions about the duration of immune protection.

A new preprint describes the protective efficacy of memory T-cells developed in response to the viral antigen, which could offer long-term immunity. 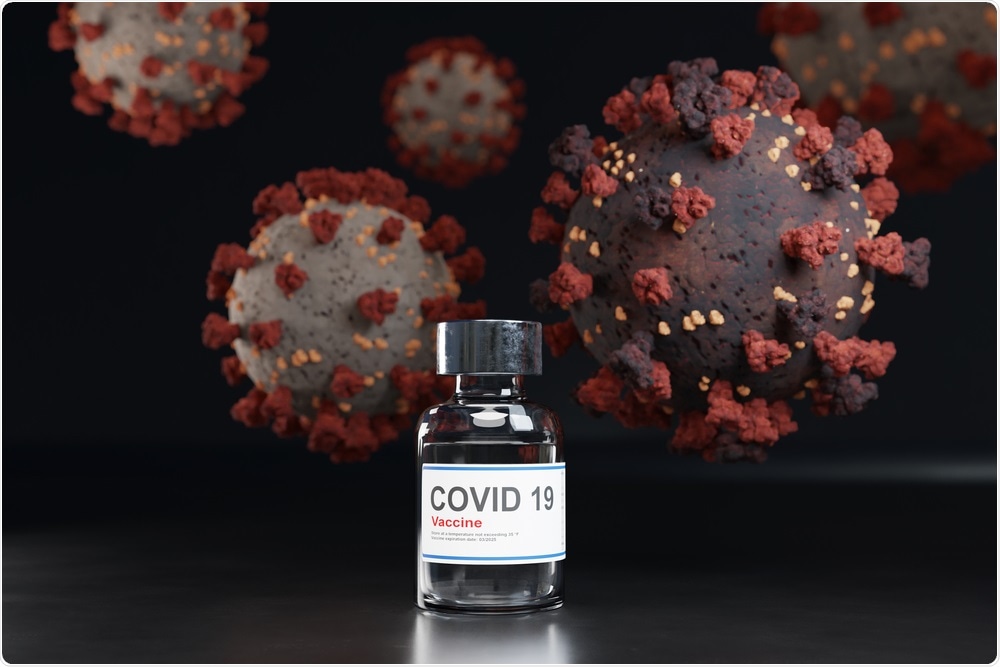 The earliest vaccines against the coronavirus disease 2019 (COVID-19) were built on the messenger ribonucleic acid (mRNA) platform. These exhibited extraordinary efficacy and were given emergency use authorization in December 2020. Along with natural infection, these vaccines elicit strong humoral (neutralizing antibodies) and cellular (B- and T-cells) immune responses.

While neutralizing antibody titer is used as a correlate of protective immunity, the production of these antibodies is the culmination of a marvelously complex cellular immune response, where activated T-cells, both CD4 and CD8 cells, reactive to the viral antigen in the patient’s body, emerge in the acute stage. These cells herald recovery from COVID-19 and react with the overlapping spike peptide pools in vitro.

Such spike-reactive T-cells are found in convalescence, as well as in vaccinated individuals, including some cells that are key to antibody-producing B-cell maturation in the germinal centers and also drive cytotoxic functions. An important early observation in this pandemic has been the recovery of individuals with poor or absent antibody responses from COVID-19, indicating the central role of cellular immunity in the resolution of this infection.

This is confirmed by the significant decline in severe COVID-19 cases following mass vaccination, even though antibody levels are seen to wane and breakthrough infections increase over time. This can be explained by a robust cellular immune response that inhibits viral spread between cells, even after antibody titers become undetectable.

With other coronaviruses, cell-mediated immunity has been demonstrated for up to 17 years from the initial infection without antibodies. In fact, this has been observed even up to 15 months after SARS-CoV-2 infection as well.

The current study explores the T-cell response, along with the anti-receptor binding domain (RBD) antibody response, in a cohort of scientists and healthcare workers who received the Pfizer BNT162b2 vaccine in two doses 21 days apart. The time of examination was up to six months from the first dose.

The researchers found that vaccination elicited spike-specific T cells, including long-lived memory stem cells that are key to long-term immunity.

While no anti-RBD antibodies were present at baseline in any of the 71 subjects, all developed significant titers after the second vaccine dose, at a median of approximately 1,800 at 14 days from the second dose and about 500 six months later. Vaccine efficacy is lower in older people, however.

The response of T-cells to the viral spike antigen was tested using surface markers for activation, and cytokine staining within the cell. Both CD4 and CD8 T-cells increased after the first and second doses, but decreased at six months.

Activated CD4 T-cells were present in the vast majority of donors at baseline, increasing six times at 21 days from the first dose, and still further at two weeks from the second. At six months, CD4 T-cells were five-fold the baseline level.

Age was inversely related to anti-spike CD4 cell frequency after the first dose, with fewer activated T-cells detected in older people over the course of the vaccine regimen.

“Thus, vaccination induces detectable and robust antigen-specific T cells that develop before high antibody titers, with most T cell expansion occurring after the first dose and persisting for up to 6 months.”

Anti-spike T-cells, including both CD4 and CD8 T-cells, producing interferon-gamma (IFN-γ), were found in about half the patients at baseline. At 21 days from the priming dose, this went up to 83% and 71% for IFN-γ+ CD4 and CD8 cells, respectively, remaining stable at 14 days from the booster dose for up to six months.

Other cytokine-producing CD4 and CD8 T-cells specific to the spike antigen were induced after the first dose, continuing through the second dose and at six months. These included tumor necrosis factor α (TNF-α), which peaked at 14 days from the second dose, accompanied by a decline in polyfunctional TNFα+IFNγ+ cells to pre-vaccination levels at six months.

Production of high levels of IFN-γ and IL-2 was found with the spike-specific cells, but not IL-17 and IL-4, showing a T helper cell type 1 (Th1) bias in the pattern of differentiation.  Polyfunctional CD4+ cell fractions increased progressively, while CD8 cells with two functions dominated at six months.

This shows how vaccination leads to a strong cytokine response by CD4 and CD8 cells after the first dose, with increasing fractions of polyfunctional cells after the booster dose that are maintained for six months or more. 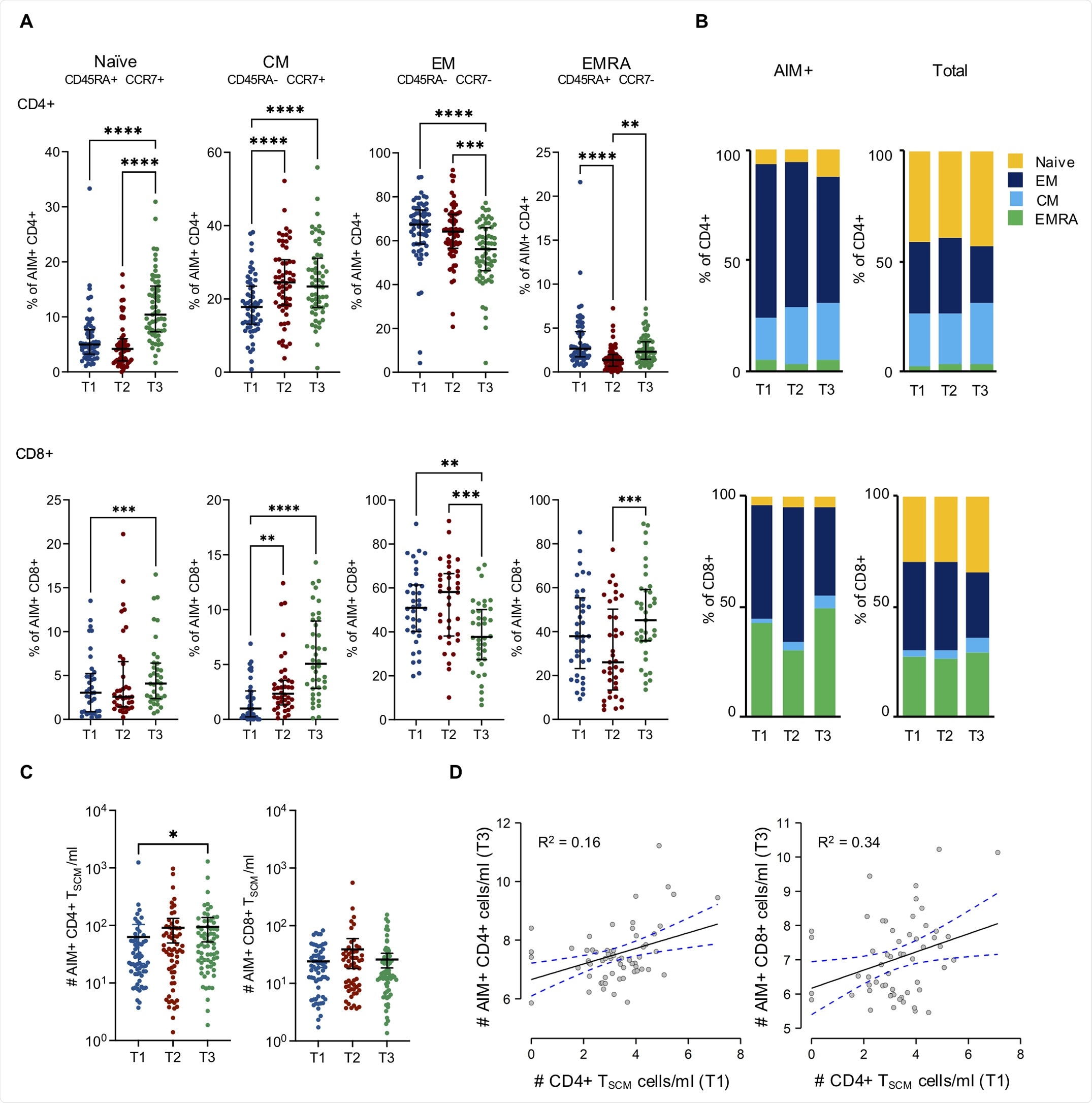 Vaccination gives rise to T memory stem cells (TMSCs) that differentiate into polyfunctional effector cells when they are exposed to the specific antigen again, persisting over the long term. CD4 TMSCs were found in almost 90% of individuals after the first and second doses, while for CD8 TMSCs, the corresponding fractions were 94% and 87%, respectively. Both fractions remained stable at six months.

The number of early CD4+ TSCMs induced by the priming dose significantly predicted the number of both CD4+ and CD8+ activated T-cells at six months. Effector features of spike-specific CD4+ and CD8+ cells were acquired after the booster dose of the vaccine, but became less prominent over time and were eventually replaced by phenotypic attributes of memory cells.

Overall, the priming dose elicits mostly effector T-cells, with intermediate cytokine production, high Granzyme B levels but low polyfunctional fractions. A few of these T-cells were found to exhibit stem cell characteristics. With the booster, the response peaks with a polyfunctional, activated cytotoxic T-cell response, including Tfh cells.

The spike-specific T-cells that remain are those which have survived the immunological contraction and are expected to respond rapidly and efficiently to reinfection with the virus, via sustained humoral and cytotoxic cellular responses. The TSCM pool also persists. These findings agree with actual vaccine data indicating continued vaccine effectiveness against severe COVID-19 of more than 90% for up to six months.

However, waning antibody titers over time correlates with reduced protection against infection.

The current study demonstrates a robust spike-specific memory T-cell response that peaks at 14 days from the booster dose and remains sustained at six months. The researchers also found TMSCs persisting in the blood over time, ready to respond to the antigen when re-encountered.

The presence of spike-specific T-cells at baseline in almost all subjects may be due to a pool of memory cells that react with other coronaviruses. This is linked to a higher immune response following vaccination. However, high activated CD4 cell fractions at baseline did not correlate with higher antibody titers following vaccination in this study, perhaps because these T-cells react to the S2 subunit of the spike and not the RBD, whereas anti-RBD antibodies alone were measured to assess the antibody response.

In this study, vaccination elicited CD4 T-cells that efficiently induced humoral immunity. The early CD4 spike-specific responses were predictive of antibody levels at six months, showing the key role of these cells in eliciting a robust antibody response.

Effective cytokine responses were elicited in a Th1-skewed manner and maintained at six months, as shown by the persistence of polyfunctional memory T-cells. This is known to be a predictor of successful immunization. Both CD4 and CD8 T-cells were found to produce IFN-γ, IL-2, and TNF-α, as compared to IFN-γ, TNF-α, with granzyme B expression, respectively.

The induction of TSCMs at stable levels for six months or more in both CD4 and CD8 fractions indicates the establishment of durable immunity against SARS-CoV-2. Both males and females responded equally to the vaccine, unlike most vaccines where females respond better.

“The results of this study can be visualized as the dynamic and integrated emergence of a Spike-specific adaptive immune response, characterized by a T cell response which precedes the development of high levels of anti-RBD antibodies.”

While TSCMs are rapidly elicited, their correlation with protection against reinfection must be established by further research.