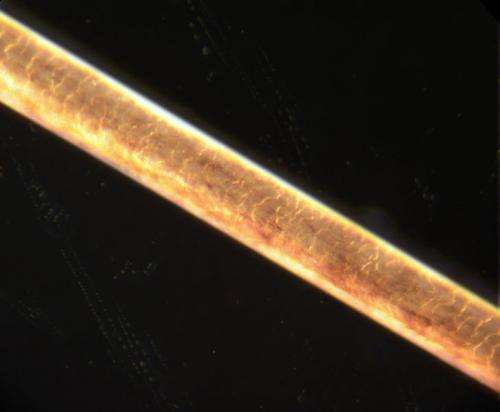 A newly discovered cause of balding in aging male mice could reveal a cause of hair loss in men and women as well, reports a study from Northwestern Medicine scientists. The findings provide new insight into how hair and tissues age.

The study, published in Nature Aging in October, shows as hair stem cells age, they lose the stickiness that keeps them lodged inside the hair follicle. As their adhesiveness wanes, the stem cells escape from their location, called the bulge, into the dermis. Outside their delicate microenvironment, they generally can’t survive.

“The result is fewer and fewer stem cells in the hair follicle to produce hair,” said lead author Rui Yi, the Paul E. Steiner Research Professor of Pathology at Northwestern University Feinberg School of Medicine. “This results in thinning hair and ultimately baldness during aging.”

The finding could likely apply to older men and women with thinning hair because there are many similarities between mice and humans in hair and stem cells, Yi said.

This is the first time hair follicle aging has been tracked in live animals, allowing scientists a real-time cellular view of the aging process.

Scientists also discovered two key genes responsible for enhancing adhesiveness of the stem cells. In a current study, they are trying to reinstate these genes to see if that will reverse hair loss.

Our hair follicle goes through cycles of life and death. During these normal cycles, a large number of stem cells stay permanently lodged in the stem cell compartment of hair follicles to keep producing hair follicle cells. In this study, scientists discovered what happens to these stem cells due to aging, resulting in thinning hair and balding.

How the study advances research

“We believe this stem cell escape mechanism has never been reported before, because nobody could track the aging process in live animals,” Yi said.

Scientists knew hair follicles become miniaturized during aging. But how it happened wasn’t clear. Many scientists thought it was due to cell death or the inability of cells to divide as they age.

“We discovered, at least in part, it is due to hair follicle stem cells migrating away from their niche,” Yi said. “Cell death also occurs during our observation. So, our discovery doesn’t dispute existing theories but provides a new mechanism.”

How the study worked

Researchers then identified a special group of genes which may regulate these cell adhesion genes. They genetically knocked out these two genes, FOXC1 and NFATC1, in mutant animals. The result: rapid progress of hair loss starting at four months. Within 12 to 16 months, these mice became completely bald. Finally, researchers used the live imaging to observe stem cell escape in these mutant mice and captured the action of stem cells migrating away from stem cell niche.