Researchers create an ayahuasca PILL: Powerful psychedelic could be coming to a pharmacy near you in next 10 years

A medical-grade version of the popular hippy brew ayahuasca could become available to Americans within the next decade.

Filament Health, a Canadian psychedelic drug company, has created a medicinal form of the powerful psychedelic which can be taken orally as a pill. The firm hopes to push the medical-grade through an FDA trial in 2023.

Ayahuasca is being touted as an alternative treatment for post-traumatic stress disorder (PTSD) and depression after becoming popular with the backing of celebrities such as Joe Rogan and Green Bay Packers quarterback Aaron Rodgers.

But Americans currently need to travel to Central and South America for expensive retreats and religious experiences involving the potent brew.

However, its therapeutic benefits are mainly anecdotal, and a growing body of evidence shows that the drug also carries the risk of long-lasting effects on mental health. 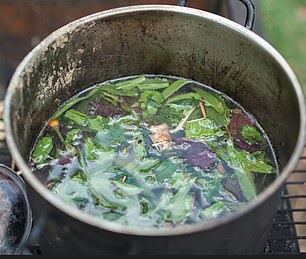 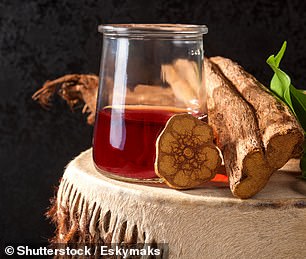 MDMA could be available in US hospitals in 2024 after showing promise as a  powerful treatment for PTSD. Researchers behind a landmark trial told DailyMail.com they expect to submit a new drug application within months.

Ayahuasca contains the compound N,N-Dymethyltriptamine (DMT), one of the world’s most potent hallucinogens.

Like LSD and psilocybin, DMT has demonstrated its ability to increase connectivity between different brain networks impeded by depression and trauma.

The ayahuasca brew is made from boiling the Amazonian vine Banisteriopsis caapi, which contains the DMT, and the chacruna bush.

The brew is typically administered by a shaman, who acts as a guide during the trip.

There is no standard ayahuasca recipe. Different cultures and shamans will make it differently based on their tradition. This means that there is no uniform dose of DMT, creating a variable experience for users.

Filament Health, which focuses on developing botanical psychedelics to treat mental illness, has created a medicinal form of ayahuasca that will likely enter a regulator-approved trial in 2023.

It could become available for prescription use in North America within the next decade, according to Ben Lightburn, CEO of Filament Health.

Filament licences its therapeutics to researchers and institutions that want to study psychedelics’ applications to mental health treatment. Several institutions have  embarked on studying psilocybin manufactured by Filament.

The same process must happen before the medical grade ayahuasca can be studied in a clinical trial.

Researchers who want to study banned substances such as DMT have to jump through some bureaucratic hoops as well. Because DMT is a schedule 1 substance, meaning it is deemed to have no medical benefit, researchers have to provide the DEA with extensive ingredient lists, oversight protocol, and storage plans.

Researchers interested in studying DMT have to submit an Investigational New Drug (IND) application to the appropriate division within the Food and Drug Administration, which can reject. In that case, a project can be placed on an indefinite clinical hold

Even if the experimentation is approved, and medicinal value is uncovered, there is no obvious path toward assigning the drug a new classification, making its introduction to the US market still murkier.

The medicinal ayahuasca is just the latest development in a wave of research into the therapeutic properties of drugs like it, such as psilocybin, the psychoactive ingredient in magic mushrooms. 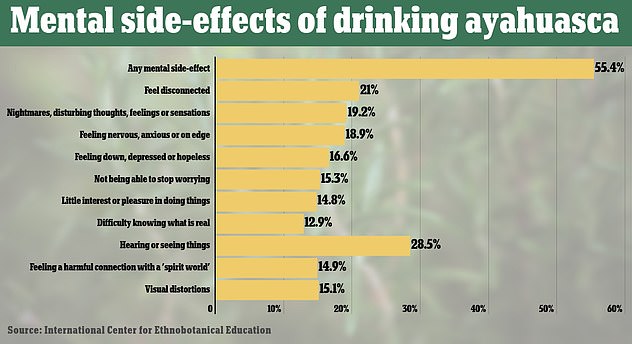 Shown above are the mental side-effects that people said they faced. Hearing or seeing things or feeling disconnected were the most common ones 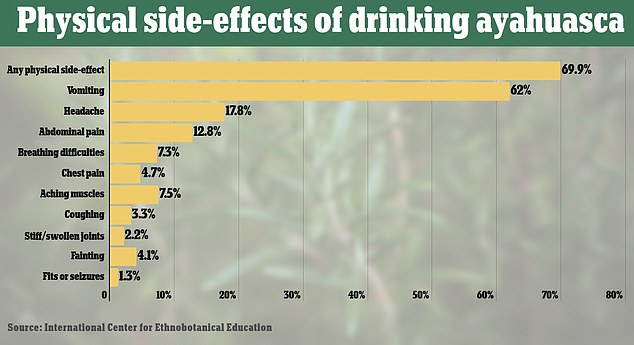 Seven in ten people who took ayahuasca said they had a physical side-effect. The most common was vomiting, but this is considered normal with the drink and part of ‘cleansing’

Ayahuasca is a hallucinogenic drink that is illegal in the US and UK but widely used by tribal societies in the Amazon basin.

Shamans consider ayahuasca a ‘wisdom’ plant that allows an entry into the spiritual world, and it was recognized as such by the government of Peru in 2008.

It can cause hallucinations that are similar to the effects of LSD or magic mushrooms, according to Talk to Frank. They last for two hours and are ‘usually pleasurable’ but can cause panic and horrifying flashbacks, the website says.

The negative emotional effects from taking ayahuasca can last for days, and make it especially dangerous for people with mental health problems.

It can also raise blood pressure and heart rate and may harm those with a pre-existing heart condition.

The ayahuasca plant is typically the star of the psychedelic experience. The compound increases connectivity between different brain networks and boosts synaptic plasticity.

It elicits powerful hallucinations and distorts one’s view of reality.

The chacruna shrub, meanwhile, is what kickstarts the DMT in the elixir.

The body’s natural enzymes break down the psychoactive effects in the ayahuasca vine, so shamans add the extracts from the shrub.

Chacruna shrub is rich in a compound known as a ‘monoamine oxidase inhibitor’ (MAOI), which stops the body’s enzymes from doing their job. South American shamans have used the shrub to develop different ayahuasca recipes, and Filament wanted to honor the traditional foundations of the brew.

DMT is generally synthesized on its own, but scientists at Filament Health sourced one of the traditional preparations, including the chacruna shrub to extract the medical-grade ayahuasca.

Mr Lightburn said: ‘We have a hypothesis that the reason ayahuasca might work well for certain indications has to do with the fact that it’s not just DMT, but the combination.’

Filament has already launched clinical trials into another psychedelic treatment for major depression. Its capsule PEX010 is made up of the compound that lends its psychedelic effects to magic mushrooms, psilocybin.

PEX010 is currently being used in clinical trials approved by health regulators in the both Canada and the US.

The company has also received several patents from the Canadian Intellectual Property Office and United States Patent and Trademark Office for its process for extracting natural psilocybin from plants and manipulating it into a usable medical treatment.

Despite its illegal status in the US, ayahuasca has garnered a high-profile following, including fans such as Miley Cyrus and Joe Rogan.

Miley Cyrus said she ‘loved’ the drug and that it left her seeing snakes immediately, in an interview with magazine Rolling Stone in 2020.

Joe Rogan is a big proponent of DMT — the active ingredient used in ayahuasca — and regularly shares his experiences on his podcast.

The drink has also been blamed for the struggles of Packers quarterback Aaron Rodgers, with his team losing five games this season.

Mr Rodgers, a four-time MVP winner with two wins back-to-back, attributed his success on the field to transformative trips with ayahuasca. THIS ALL TOTALLY UP TO DATE NOW?

For at least a century, ayahuasca has been used for spiritual purposes by the indigenous peoples of the Amazon basin, typically in religious rituals.