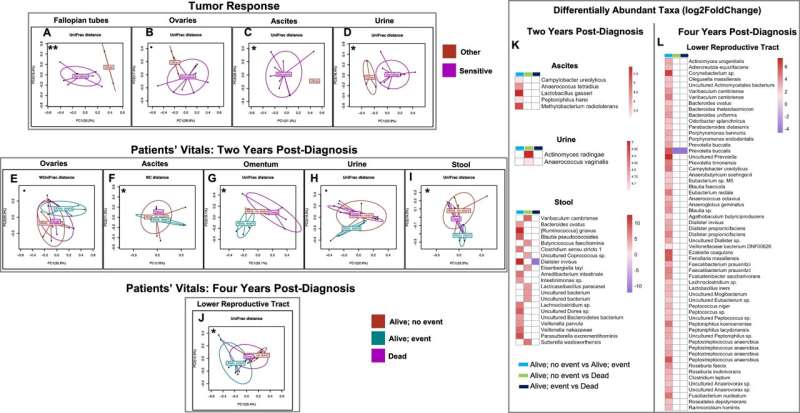 A specific colonization of microbes in the reproductive tract is commonly found in women with ovarian cancer, according to a new study from Mayo Clinic’s Center for Individualized Medicine. The discovery, published in Scientific Reports, strengthens evidence that the bacterial component of the microbiome—a community of microorganisms that also consists of viruses, yeasts and fungi—is an important indicator for early detection, diagnosis and prognosis of ovarian cancer.

“In addition, we found a clear pattern that reveals women with early stage ovarian cancer have a significantly higher accumulation of the pathogenic microbes when compared to women with later-stage disease,” says Abigail Asangba, Ph.D., a microbiome researcher within the Center for Individualized Medicine. “In later stages, the number of microbes fades. This strong signal could potentially help us diagnose women earlier and save lives—similar to how a noninvasive Pap smear is used to detect cervical cancer.”

The study also suggests that a higher accumulation of pathogenic microbes plays a role in treatment outcomes and could be a potential indicator for predicting a patient’s prognosis and response to therapy.

“We analyzed whether patients with similar outcomes also had a similar microbial composition before they started treatment, irrespective of stage, grade or histology of cancer, as well as other factors,” Dr. Asangba says. “And we found that the patients with a higher accumulation of pathogenic microbes had poorer outcomes in comparison to those without.”

Ovarian cancer ranks fifth in cancer deaths among women and is the second most common gynecological malignancy. An estimated 20,000 women in the U.S. are expected to be diagnosed with ovarian cancer in 2023, and nearly 13,000 will die from the disease, according to the American Cancer Society.

Most women who are affected are usually diagnosed at an advanced stage because early-stage disease is usually asymptomatic. Furthermore, only 20% of cases are caused by genetic mutations, including BRCA1 and BRCA2 genes, while the remaining 80% of cases have no known cause.

Zeroing in on pathogenic microbes

In the women with ovarian cancer, the team observed a colonization of disease-causing bacteria, including Dialister, Corynebacterium, Prevotella and Peptoniphilus.

“These microbes are known to be associated with other diseases, including other cancers, but more study is needed to know if they are a contributing driver of ovarian cancer,” says Marina Walther-Antonio, Ph.D., a microbiome researcher within Mayo Clinic’s Center for Individualized Medicine and a study author. Dr. Walther-Antonio is a member of the Mayo Clinic Comprehensive Cancer Center. She focuses on women’s health, particularly gynecologic cancers.

“Our ultimate goal is to understand what role the microbiome plays in gynecologic cancers. We are exploring several potential avenues: the role in the causation of the disease, aggravation of the disease and treatment resistance,” Dr. Walther-Antonio says.

The study is an extension of several other previously published studies by Dr. Walther-Antonio and her team that link the microbiome to endometrial cancer. In one study, the team found that a microbe called Porphyromonas somerae has a pathogenic role in endometrial cancer via intracellular activity.

Dr. Walther-Antonio says identifying microbiome signatures to predict the development of malignancies could lead to intervention before cancers have a chance to materialize.

“Our latest study provides a significant leap toward understanding the prognostic potential of the microbiome and places us a step closer to being able to help our patients,” Dr. Walther-Antonio says.