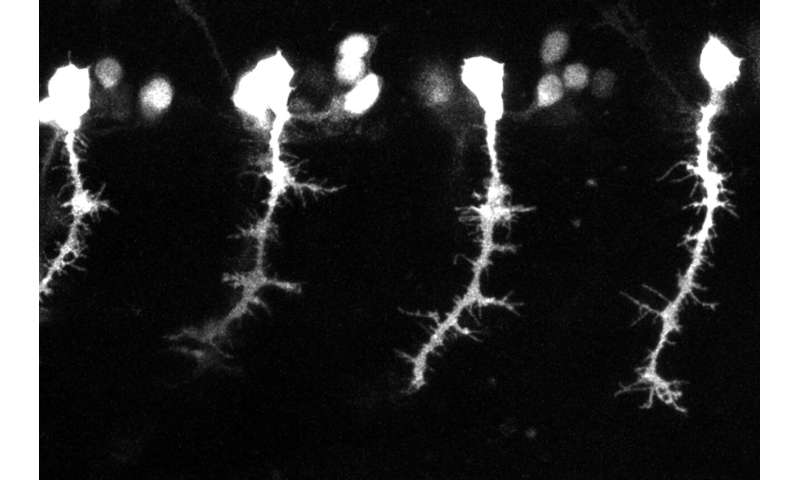 Harvard University researchers have developed an engineering technique to precisely control the direction that neurons grow their axons, cable-like structures that allow nerve cells to connect with each other. In a zebrafish model, researchers used the approach to correct defective neural connections and restore the neuron’s ability to cause muscle contractions.

The findings, published in the journal Developmental Cell, represent a key step toward repairing nervous system damage in patients. They may also enable scientists to create more accurate models of the brain in a lab dish, by instructing the formation of precise neuronal connections resembling those of the actual brain.

“The process of establishing connections between neurons mostly occurs during embryonic development, especially in mammals like us. After that point, if these connections are severed in situations such as spinal cord injury, the neurons typically do not regrow their connections, losing functionality. It would be a great achievement to be able to overcome these difficulties,” said Paola Arlotta, the Golub Family Professor of Stem Cell and Regenerative Biology. “This study is a proof of principle that shows the potential of a noninvasive strategy to direct neuron growth.”

A neuron’s axon is a projection that emanates from the cell body and connects to other cells, often located a great distance away. In the developing embryo, a complex set of signals guide a specialized structure at the tip of the axon, called the growth cone, to its precise target to wire the nervous system.

“Nature has come up with this beautiful symphony of molecular signaling that allows a tissue as incredibly complex as the brain to wire appropriately. We’re learning more and more about how this happens, but we don’t yet have the ability to direct all these intricate processes,” said James Harris, a graduate student in the Arlotta lab and lead author of the study. “Instead, we created an extremely precise tool that allows us to override the molecular signals within the body and guide axonal growth, according to our own designs.”

By controlling axonal growth directly, this strategy avoids disrupting critical biological signaling molecules or introducing chemicals that might alter the delicate developmental environment, which could potentially cause unintended consequences on neighboring cells. To make sure the tool was highly specific, the researchers took an engineering approach to the problem.

To control axon growth, the researchers introduced a fusion protein into specific neurons that combined the functionality of two different proteins. The first protein is normally expressed in developing axons, and controls the machinery responsible for axonal outgrowth. The second protein is originally found in plants and helps them to sense light.

“Much in the way that plants grow toward the sun, we engineered the axons so they grow toward our targeted illumination,” Harris said.

When the researchers shone a specific type of light near the neurons, the axons grew toward the noninvasive stimulus.

The researchers tested the approach in a zebrafish model, in collaboration with the Leonard Zon lab. They were able to not only make the neurons grow in a specific chosen direction, but also make the neurons grow across repulsive developmental barriers that normally restrict axons to a very narrow body location.

“There are specific molecules that are expressed in these developmental barriers that help guide axons correctly during normal development. Interestingly, many of these molecules are also present in damaged tissue and act as barriers to axonal regeneration in mammals,” Harris said. “In this particular context of a developing zebrafish embryo, our approach had the power to overcome these inhibitory signaling molecules.”

The researchers also studied a zebrafish model with genetic mutations that prevented axons from growing correctly. Their illumination approach successfully rescued this defect by guiding axons to their targets. The guided axons were able to cause muscle contractions in the zebrafish, demonstrating that the repaired connections were functional.

Although applying this technology to repairing injured connections in patients will require substantial additional work, this study is a promising step in this important direction. More immediately, the new technique can help scientists create more accurate models of the brain.

“We are really interested in using this technology to wire more specific connections within human brain organoids,” Arlotta said.

Made from human stem cells, organoids replicate important features of the developing nervous system in a lab dish.