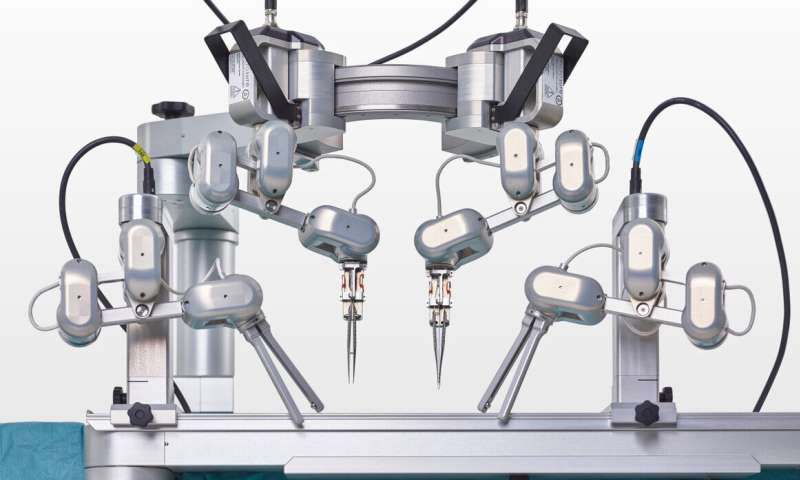 A team of researchers working at Maastricht University Medical Center in The Netherlands has assessed the capabilities of a robot that assists with microsurgeries. In their paper published in the journal Nature Communications, the group describes how the robot works and how well it did in its first human trial.

Some types of surgery are much more difficult than others, and one of the primary reasons for the differences is the size of the tissue involved. Sewing tiny nerves together is much more difficult than reconnecting large parts of an intestine, for example. One of the reasons that operating on very small tissues is difficult is because of the tendency of the human hand to move slightly in undesired ways, jerking and shaking nearly imperceptibly. When operating on large body parts, this is generally not an issue, but with small tissues, the effects of hand movements are greatly magnified. Because of that, scientists have been developing robots that assist with surgery by mimicking the actions of a surgeon’s hands, minus the shaking. In this new effort, the researchers tested such a robot called MUSA.

The clinical trial involved a single surgeon performing a procedure called lymphatico-venous anastomosis (LAS) on eight women. Four of the procedures were conducted without the robot, four with the robot assisting. LAS is performed to reconnect lymphatic tissue with blood vessels after patients undergo surgery to remove breast tumors. The vessels are extremely small, just 0.3 millimeters, and the surgery very difficult.

Using MUSA, the surgeon manipulated controllers that resemble surgical tools. The actions of the surgeon are mimicked by the robot using tools in its own hands. Such actions are mimicked precisely except for shaking or other undesired hand movements. The surgeon also manipulates a foot pedal for other actions such as operating the microscope through which the surgery is observed.