Some exercise trends are unlikely to ever catch on or live up to the hype (Suzanne Somers "thighmaster", vibrating belts, power balance bracelets, ab rollers anyone?). Occasionally, however, we cotton on to a smart trend that can live up to the hype. 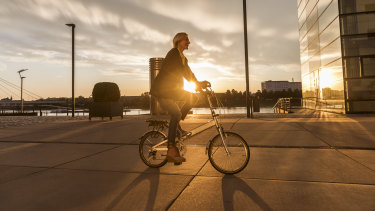 The Blue Zones approach incorporates movement into our daily lives.Credit:Getty

Often, these trends aren’t new so much as neatly repackaged versions of exercises that have always existed. So it goes with Blue-Zone workouts, inspired by the communities dotted around the globe where people frequently live to over 100 and tend to avoid many of the chronic diseases that plague Westerners as we age.

In a time when we’re always busy – too busy to exercise apparently (though never too busy to Netflix) and when workouts are becoming techier and trippier (take, for instance, the rise of biohacking gyms or the Mirror workout where for US$1500 ($2175) you get an LCD mirror which, when switched on, streams live fitness classes to your lounge), there is appeal in the simplicity of the Blue Zone workout approach.

This is because it doesn’t require a gym, it doesn’t cost a cent and it doesn’t even require us to schedule in exercise.

Fitness the Blue Zone way is not formal. Rather it becomes part of the fabric of our lives – we simply move more, incorporating it into the way we live.

This means different strokes for different folks. For instance, among the Blue Zone communities (named because of the blue-circles researchers drew to identify them on a world map), there are Okinawans who dance daily, Seventh Day Adventists who love to walk, Sardinians who herd their sheep up and down hills on foot, Ikarians who tend to their gardens and Costa Ricans who cycle everywhere.

Whatever form of movement they do, they rarely sit for more than 20 minutes at a time.

Whatever form of movement they do, they rarely sit for more than 20 minutes at a time. So while we may not have a flock of sheep to herd up a hill, we can all leave our cars at home more often and walk, cycle, carry groceries or take the stairs as well as put our backs into house chores and our gardens.

It can be short and sharp (climbing stairs) or long and leisurely (walking to work) and anyone – even centenarians – can do it.

It’s an approach that has garnered more attention from researchers in recent years as fewer people are doing it.

The average Australian worker spends more than six hours a day sitting which makes us a nation of, what researchers call, “high sitters”. High sitting has been linked with everything from cancer and obesity to heart disease and diabetes and even depression.

Research from 2019 found, for those who sit less than four hours a day, they can reduce their risk of cardiovascular disease simply by standing up and moving about more often.

Incidental exercise, like travelling to and from work, has also been found to be beneficial for mental health.

And if you're still in doubt, consider the success of those communities who are part of the Blue Zones project, turning their health around by leveraging the secrets of the centenarians.

Along with regular movement, the commonalities of the Blue Zone communities include a plant-based diet, the 80 per cent rule (eat only until you’re 80 per cent full), a shared tipple with friends (most have 1-2 glasses of wine a day), strategies to de-stress (some pray, some take naps, some do happy hour), a sense of purpose and connection (through community or faith groups or social activities) and prioritising family and close relationships.

Currently, 42 communities around the world are participating in the Blue Zones Project, including Albert Lea in Minnesota. A town of about 18,000, they added more walk and cycle-ways, community gardens worked with local businesses to make healthy foods more available and affordable and worked with the community to create walking groups.

The town has shed more than 3600 kilograms of weight, rates of smoking dropped by 4 per cent during the first five years of the program and, the estimated lifespans of its residents have increased by about three years.

It’s a reminder that little changes in the way we live can make a big difference to our health and wellbeing.

Exercise and movement shouldn’t be distinct from the rest of our lives; something that we slot in half an hour or an hour for a few times a week. Humans are made to move and integrating it into our lives, by adopting a Blue Zones approach, is a trend worthy of the hype.