The Football Association will limit how often young players can head balls in training, to address growing health fears.

An outright ban is not expected, rather a reduction in how many times players under 18 can head the ball, according to reports.

It comes after mounting pressure on the English football’s governing body to acknowledge research linking moderate traumatic brain injury – such as that caused by heading the ball – and a higher risk of developing dementia.

Last October, a landmark study found that professional footballers have a much-increased risk of dying from dementia and other serious neurological diseases.

It prompted plans from The Scottish Football Association to completely ban primary school children in Scotland from heading the ball.

The FA said at the time there was not enough evidence to change its stance, but appear to have backtracked. 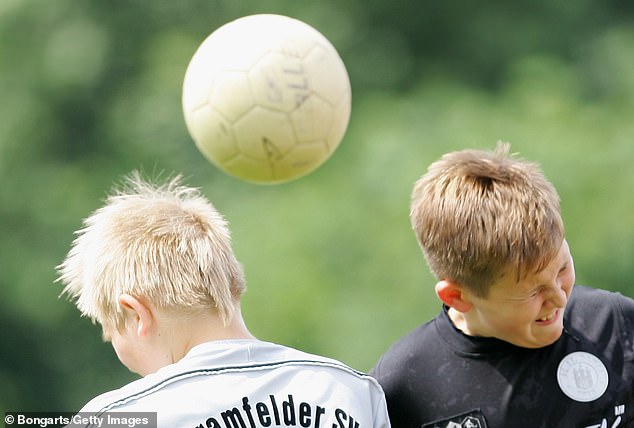 The Football Association is expected to limit how often young players can head balls in training, as officials seek to combat dementia fears (stock image)

The FA confirmed to MailOnline they are finalising to confirm its plans later this month. The guidance will vary for different ages.

The change comes after talks with the Scottish FA, The Times reported.

Many officials and sports players believe a limit on heading is a necessary precaution in light of existing research.

October’s study, which was funded by the FA and the PFA, the player’s union, showed that former players are three-and-a-half times more likely to die of dementia than normal people of the same age.

The researchers, led by Dr Willie Stewart, studied their medical and death records and matched them against a control group of 23,000 people from the general population according to age, sex and demographic who had not played professional football.

They found that while the control group had a one per cent mortality rate from neurological diseases, this figure rose to three per cent among the footballers.

In response to FIELD study, it was revealed that Scottish FA could ban children entirely from heading balls.

The US has had a similar ban in place since 2015 but Scotland would become the first European country to follow suit.

The FIELD study was launched after years of campaigning by the family of former West Brom and England star Jeff Astle, who died aged 59 with dementia.

His inquest heard his neurological disorder – chronic traumatic encephalopathy (CTE) – had been caused by the repeated impact of heading footballs.

NFL player Aaron Hernandez also had CTE, which has early symptoms of aggression, suicidal thoughts and mood swings, in the most severe forms ever detected for someone his age. The former New England Patriots killed himself aged 27 while serving a life sentence for murder.

A landmark report by the Centers for Disease Control and Prevention in 2012 said NFL players were four times more likely to die from ALS than the rest of the US population.

The 76-year-old was one of three West Ham players who lifted the Jules Rimet trophy in Wembley Stadium in 1966.

He scored the third goal of the match which put England 2-1 up against West Germany.

Three of the 11 England players who started the World Cup final against West Germany – Peters, Nobby Stiles and Ray Wilson – were all diagnosed with dementia.

And just two weeks ago, ex-England footballer Sue Lopez, 74, blamed her dementia on heading the ball during her career.

Former England captain Alan Shearer once said he feared he would get dementia because he used to head footballs 100 times a day during his playing career.

Ex-Arsenal and Celtic striker John Hartson praised the Scottish FA for their acknowledgement of the FIELD study.

Mr Hartson told the BBC: ‘Heading was a massive part of my game. Managers bought me because I could head the ball.

‘There have been some serious situations where players have lost their lives and ex-legends suffering from dementia.’

Now working as a pundit, Mr Hartson has called for further research on the topic.

He added: ‘I’m glad the SFA are leading the rest of football and doing something about it.’

In February last year, researchers at Liverpool Hope University found that an intense period of heading footballs can lead to short-term memory loss and eye focus.

The scientists tested 20 amateur footballers after asking them to head 20 balls one after the other.

They found that the effects on memory and the ability to use both eyes to rapidly focus on different points – known as saccadic eye speed – were glaring.

Dr James Roberts, a specialist in motion control at the university’s Health Sciences department, said he had been surprised by the findings, which came after the players were asked to head back balls from a throw-in.

‘When the players were tested immediately afterwards, there were clear effects,’ he said.

‘There was a decline in both saccadic eye speed and short-term memory.

‘That’s concerning when you consider most recreational players will have to go about their everyday lives, such as drive home after a game.’

He was only 59 but doctors said he had the brain of a 90-year-old after suffering from chronic traumatic encephalopathy (CTE).

CTE is a progressive, degenerative brain disease found in individuals with a history of head injury, often as a result of multiple concussions.

An inquest ruled Astle died from dementia caused by heading footballs – the first British professional footballer to be officially confirmed to have done so.

Astle, who was left unable to recognise his own children, once commented that heading a football was like heading ‘a bag of bricks’.

His family set up the Jeff Astle Foundation in 2015 in order to raise awareness of brain injury in sport. His daughter Dawn said ‘the game that he lived for killed him’.

Danny Blanchflower, who captained Tottenham Hotspur during their double winning season of 1961, died after suffering from Alzheimer’s disease in 1993. He was 67.

His death has also been linked to heading the heavy, leather balls of the 1940s and 50s, along with fellow Tottenham players Dave Mackay, Peter Baker and Ron Henry.