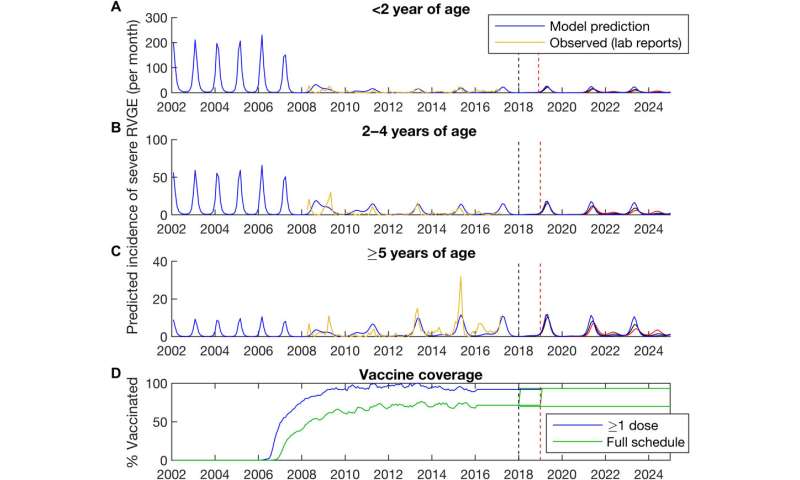 Before a rotavirus vaccine became available in 2006, the infection was an enormous wintertime burden—a cause of severe epidemics that threatened infants’ lives, and sometimes claimed them.

Arriving during the chillier months of the year, rotavirus is among a slew of “fellow traveler” viruses, pathogens that circulate throughout the population during so-called cold and flu season.

Rotavirus, however, is nothing like its seasonal companions. For one thing, it doesn’t invade the respiratory tract, and unlike some winter pathogens, which cause sniffles and mild malaise, rotavirus in less developed regions of the world is consistently deadly year after year. The virus is the most common cause of diarrheal disease in babies and toddlers.

Fourteen years after a vaccine brought an end to much of the annual misery wrought by rotavirus epidemics, a team of public health scientists has conducted a review of how vaccination brought about positive change. The look-back study focuses on rotavirus infections in New York City, and examines how mathematical models predicted the outcomes produced by vaccination years before they ever occurred.

Predicting the dynamics of an infectious disease is tricky business, a sometimes hit or miss proposition—and predictive models have failed on multiple occasions involving other pathogens.

The new research arrives as New York City —and the rest of the world—struggle with a novel coronavirus, and mathematical modelers are trying to predict the course of that infectious disease.

For rotavirus, the introduction of a vaccine dramatically reduced the number of infections treated throughout the city. Equally important, vaccination has largely eliminated the pathogen as a serious threat to babies and toddlers, a vulnerable age group for diarrheal disease.

The new findings were compiled by a large research team, many of whom hail from the New York City Department of Health and Mental Hygiene, the city’s public health agency.

Writing in the journal Science Advances, the researchers have collected enough data on the post-vaccine period—2008 to 2016—that they no longer consider the infection to be an epidemic threat that targets babies and toddlers. Moreover, as herd immunity has increased, the seasonal situation in New York City has proven mathematical modelers correct. Numerous models predicted over a decade ago that a rotavirus vaccine would curtail epidemics, even change their character as rotavirus outbreaks precipitously declined. As a benefit, the annual ritual of infected babies being rushed to hospital emergency rooms in the midst of an epidemic has all but disappeared, thanks to immunization.

The majority of children traditionally affected by rotavirus infection were under two years of age prior to a vaccine. With the introduction of rotavirus immunization, the affected age group shifted from babies and toddlers to children five and older, ages that comprise a significantly less vulnerable population.

“The implementation of routine immunization against rotavirus in the United States has led to substantial changes in the epidemiology of rotavirus gastroenteritis episodes, including the emergence of odd-year epidemics and the shift in burden to slightly older age groups,” wrote Drs. Donald R. Olson and Virginia Pitzer, co-lead authors of the report.

Just as acute flaccid myelitis, AFM, a mysterious viral affliction, tends to affect children in even-numbered years, rotavirus now seems to cycle during odd-numbered ones. A noteworthy bonus of vaccination: Far fewer children are infected than during the pre-vaccine era. “These changes are associated with the herd immunity conferred by rotavirus vaccination and were portended by mathematical models,” the researchers said.

In the years before the vaccine was introduced, rotavirus affected hundreds of thousands of children in the United States—and countless more elsewhere in the world. The CDC estimates that prior to the vaccine’s widespread use, there were 500,000 outpatient visits and 60,000 hospitalizations for rotavirus infections annually. Worse, there were epidemics every year in the United States beginning in the southwestern states in November to January and peaking in northeastern states in March and April.

Rotavirus belongs to a group of double-stranded RNA viruses in the family Reoviridae. The prefix “rota” means wheel-like, which roughly describes the pathogen’s appearance when magnified.

Rotaviruses have long been the most common cause of diarrheal disease in infants and toddlers. Nearly every child in the world is infected by a rotavirus at least once by age of five, according to the CDC.

Olson, Pitzer and colleagues say their research proves there is validity to predicting infectious disease dynamics using mathematical modeling, although predictions have proven less dependable in the past with other infectious disorders.

“Changes to the periodicity and age distribution of epidemics in response to vaccination have been predicted for other pathogens, such as measles and pertussis,” they wrote. “The predictability of infectious disease systems has thus far proven elusive, with notable recent failures.