A low-calorie ‘porridge and lentil soup’ diet will be trialled in Scotland in a bid to curb the nation’s growing diabetes epidemic.

Experts believe the simple, cheap regime based on traditional Scottish staples could be the key to losing weight and reversing the effects of type 2 diabetes.

NHS figures published last year showed more than 300,000 are living with the condition in Scotland – the highest number on record.

Participants in the trial will eat a bowl of porridge for breakfast, followed by soup and bread for both lunch and dinner, with fruit for snacks. 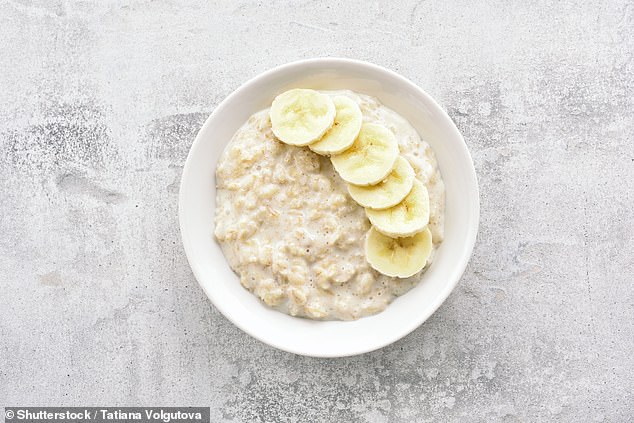 A low-calorie ‘porridge and lentil soup’ diet will be trialled in Scotland in a bid to curb the nation’s growing diabetes epidemic. Participants in the trial will eat a bowl of porridge for breakfast

To give variety, the lentil soup can be made plain or with tomatoes. Researchers have also devised a spicy soup with curry powder and beans.

The 850-calorie daily diet plan includes five portions of fruit and vegetables. Those taking part should lose a stone a month.

Professor Mike Lean, chair of Human Nutrition at the University of Glasgow’s School of Mediremission cine, Dentistry and Nursing, has created the ‘No Doubts Diet’.

He said that type 2 diabetes, which is linked to inactivity and obesity, should be taken as seriously as a cancer diagnosis.

The academic and his team achieved successful results in recent trials of a similar low-calorie diet using shakes and soups, with diabetics going into by losing significant amounts of weight.

They want to try to replicate this with participants creating simple home-made dishes. 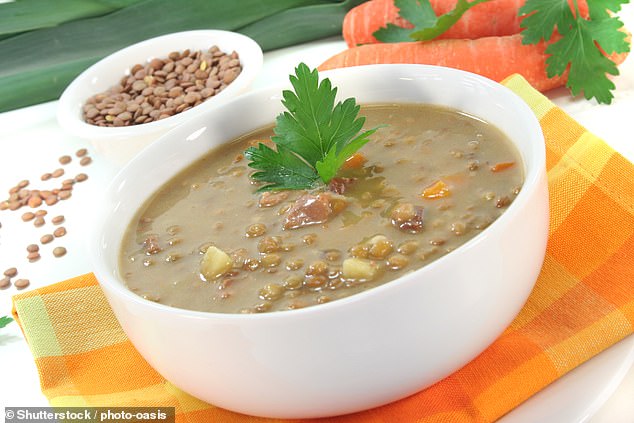 They will then have soup and bread for both lunch and dinner, with fruit for snacks in the evening

BREAKFAST Half a cup of porridge oats made up with water and a splash of cold milk, plus one portion of fruit

LUNCH Bowl of lentil soup and slice of wholemeal bread

EVENING SNACK One portion of fruit

Lentil soup can be made from a variety of recipes of up to 220 calories per portion, including basic, tomato and lentil, and spicy.

This diet should not be undertaken without support from a health professional.

Professor Lean said: ‘People are being diagnosed in their forties and fifties and it will take years off your life and you will be living with a disability.

Our research has already shown that we can put diabetes into remission with diet.

‘The new diet we want to trial is simple and based on Scottish recipes. If you get cancer you will go through chemotherapy, and going on a diet like this should be seen in the same way if you are diagnosed with diabetes.’

This causes a rise in glucose levels in the blood which, if untreated, leads to heart disease and strokes, kidney disease, liver failure, blindness and damage to nerve endings in the feet.

But diabetes goes into remission when the blood glucose levels fall into the non-diabetic range.

The 850-calorie regime would have to be followed for several weeks or months, with hunger and headaches expected at first.

A healthy average woman needs 2,000 calories a day, while a man requires 2,500.  Once they have seen their diabetes go into remission, participants would adopt a maintenance plan and receive intensive support from professionals.

‘Total diet replacement’ programmes of powdered shakes and soups are recommended by NHS Health Scotland in its latest guidance on weight-management services for adults.

‘That is why it’s so important to find an approach to losing weight – and keeping it off – that works for you.’

WHAT IS TYPE 2 DIABETES?

Type 2 diabetes is a condition which causes a person’s blood sugar to get too high.

More than 4million people in the UK are thought to have some form of diabetes.

Type 2 diabetes is associated with being overweight and you may be more likely to get it if it’s in the family.

The condition means the body does not react properly to insulin – the hormone which controls absorption of sugar into the blood – and cannot properly regulate sugar glucose levels in the blood.

Excess fat in the liver increases the risk of developing type 2 diabetes as the buildup makes it harder to control glucose levels, and also makes the body more resistant to insulin.

Weight loss is the key to reducing liver fat and getting symptoms under control.

It can lead to more serious problems with nerves, vision and the heart.