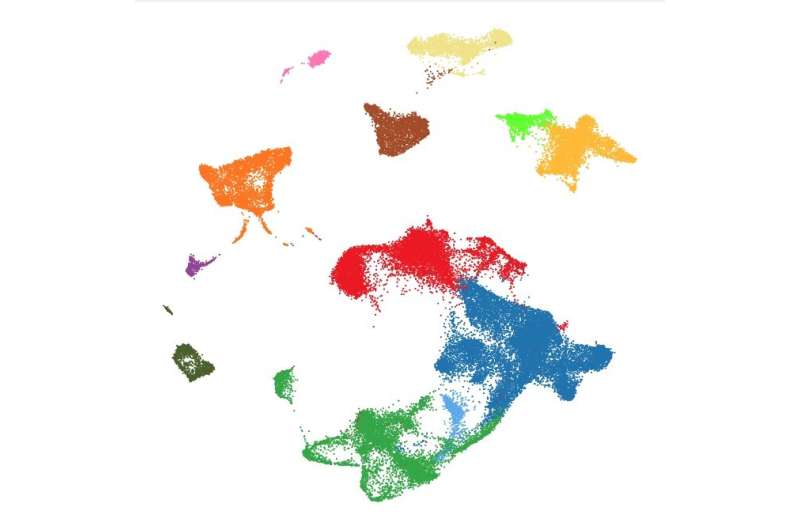 Researchers have characterized prostate cancer cell dynamics at a single-cell resolution across the timespan of the disease—from its beginning to the point of androgen independence, where the tumor no longer responds to hormone deprivation therapy.

Their study in mice, published today in eLife, reveals an expansion of intermediate cells that occurs in prostate cancer, which correlates with resistance to treatment and poor clinical outcomes in humans. These cells are castration-resistant, meaning they continue to grow in the absence of testosterone and could explain how prostate tumors become resistant to hormone-related treatments.

Prostate cancer is the most diagnosed form of cancer, and the second-leading cause of cancer-related deaths in males from the US. This is in large part due to an incomplete knowledge of the cellular drivers behind the disease’s progression and the risk of progressing to castration resistant prostate cancer (CRPC).

The prostate gland epithelium—a type of body tissue that forms the surface of glands and organs—is typically composed of two types of epithelial cells: basal cells and highly-differentiated luminal cells (cells which have altered in form). However, a more stem-like, castration-resistant intermediate of the luminal cells has previously been proposed.

“It has been suggested that normal luminal cells are able to transition into these progenitor cells under castrate conditions,” says lead author Alexandre Germanos, a Ph.D. candidate in Molecular and Cellular Biology at the University of Washington, US, and a graduate student at the Division of Human Biology, Fred Hutchinson Cancer Center, US. “There is evidence that these cells contribute to the initial development of tumors in the prostate and resistance to treatment in advanced cancers, although this is yet to be confirmed in other models of CRPC.”

To study this further, Germanos and colleagues used a mouse model of CRPC to create an “atlas of prostate cellular composition and evolution” through the course of the disease.

A gene called Pten, which codes for a tumor-suppressing enzyme, is inactive in the majority of advanced prostate cancer patients. The team used a technique called single-cell RNA sequencing to compare the epithelial and non-epithelial cell-type populations in healthy mice and those lacking Pten.

In the prostate of healthy mice, they observed multiple epithelial cell types—basal, luminal and luminal progenitor cells. In the prostate of mice lacking Pten, they observed an expansion of luminal intermediate cells, likely derived from three cellular sources—basal cells, luminal progenitor cells and differentiated luminal cells. This suggests that basal cells can transform into intermediate cells upon Pten deletion, supporting other findings in the field. The team also observed further expansion of cancerous intermediate cells upon hormone deprivation which significantly increased the diversity of cells within a tumor (known as tumor heterogeneity). They demonstrated that this heterogeneity can be constrained by inhibiting protein synthesis.

The team then sought to characterize the effects of this hormone deprivation-induced intermediate cell expansion. In the intermediate cells, they discovered that a 5-gene signature is specifically enriched. Using two datasets of bulk RNA-sequencing from prostate cancer patients, they showed that the signature is associated with treatment resistance and poor clinical outcomes. Furthermore, the signature is enriched in a subset of metastatic human prostate cancer cells—tumors that are able to spread—but not in the primary tumor cells.

These findings suggest that a 5-gene signature derived from mouse models of prostate cancer may have importance in understanding human disease. The presence of this gene signature may serve as a useful prognostic tool for predicting treatment resistance and outcomes in patients. The authors call for further studies to validate the role of this signature and of intermediate-like cell populations in individuals with prostate cancer.

Their analysis also revealed that the prostate in mice without Pten is highly enriched for immune cells that promote the production of tumors, creating a microenvironment that helps tumors evade suppression by the immune system. Pro-tumorigenic macrophages, a specialized cell type involved in the destruction of harmful organisms, are recruited by epithelial cells and a type of cell that contributes to forming connective tissue, called fibroblasts. This suggests that interrupting the recruitment of tumor-associated macrophages may be a valid strategy to overcome immunotherapy resistance in prostate cancer.

“Overall, our work highlights multiple epithelial and immune cell types that are crucial to prostate cancer initiation and progression, and sheds light on the interactions between specific cell populations that contribute to castration-resistance,” concludes senior author Andrew Hsieh, Associate Professor in the Division of Human Biology, Fred Hutchinson Cancer Center, and the Department of Medicine and Genome Sciences (affiliate), University of Washington.

“We wanted to provide a broad, searchable resource for cancer researchers and encourage further research in the area. We’ve therefore developed a publicly accessible and interactive website that allows scientists to run cell- and gene-specific queries through all 50,780 cells analyzed in our study.”