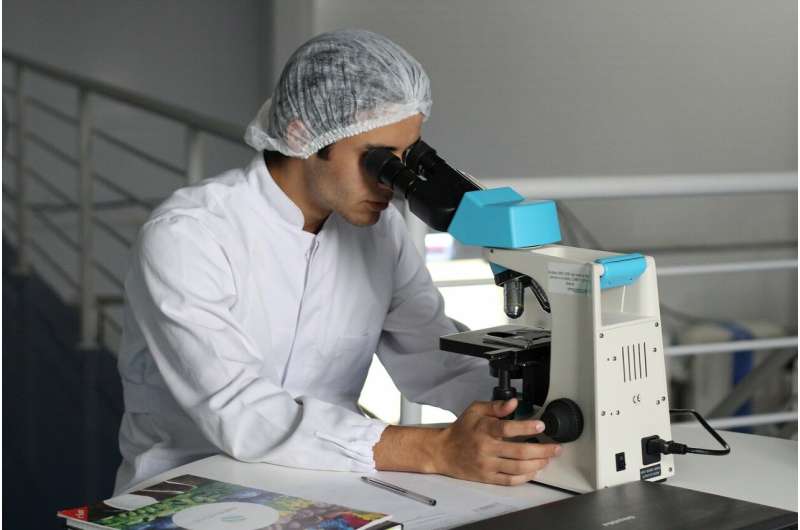 A study published today in Nature demonstrates that by modifying the surface of conventional microscope slides at the nanoscale, biological structures and cells take on a striking color contrast that can be used to instantly detect disease.

“Current approaches to tissue imaging often rely on staining or labeling cells in order to render them visible under the microscope,” Professor Abbey said.

“Even with staining or labeling, it can be challenging for pathologists to detect cancer cells, with the risk that some samples are misdiagnosed, particularly during the very early stages of disease.

“Recent breakthroughs in nanotechnology have allowed us to manipulate the interaction of light with biological tissue so that abnormal cells appear to have a different color to healthy ones. Comparing images from our slides to conventional staining is like watching color television when all you’ve seen before is black and white.”

In the study, the researchers from the La Trobe Institute for Molecular Science teamed up with co-lead researcher Associate Professor Belinda Parker’s group at the Peter MacCallum Cancer Centre to trial the new technology as an aid to diagnosing very early-stage breast cancer.

The study was conducted in collaboration with colleagues from the Garvan Institute of Medical Research, the Royal Melbourne Hospital, the Olivia Newton‐John Cancer Research Institute, The University of Melbourne and the Australian National University.

Associate Professor Parker said current techniques can mean it is difficult to distinguish early forms of breast cancer from benign lesions, particularly when there are not many abnormally-shaped cells in a complex tissue. The NanoMslide makes such a diagnosis much easier.

“When I first looked at a tissue under the microscope on the NanoMslide, I was incredibly excited,” said Associate Professor Parker, who is also an adjunct associate professor at La Trobe.

“For the first time I saw cancer cells just popping up at me. They were a different color from the surrounding tissue, and it was very easy to distinguish them from surrounding cells.”

Associate Professor Parker believes the NanoMslide will complement existing stains currently in use, to allow for more consistent cancer diagnoses.

“Based on our preliminary findings with the NanoMslide, we think this platform could be really useful in early breast cancer diagnosis, but also in other cancers where we’re really just trying to pick up a few cancer cells in a complex tissue or a blood sample.”

Professor Abbey’s group were able to develop their slide technology by harnessing open access equipment and expertise made available by the Melbourne Centre for Nanofabrication, the flagship facility of the Victorian node of the Australian National Fabrication Facility (ANFF-VIC). The team will work with MCN and the national ANFF network as they start producing their slides in much larger quantities to enter the market and to tackle a wide range of medical as well as non-medical imaging problems.

La Trobe University Vice-Chancellor Professor John Dewar AO said the invention of the NanoMslide and its application in improved cancer diagnostics highlights the vital role universities like La Trobe play in research innovation which has the power to improve lives.