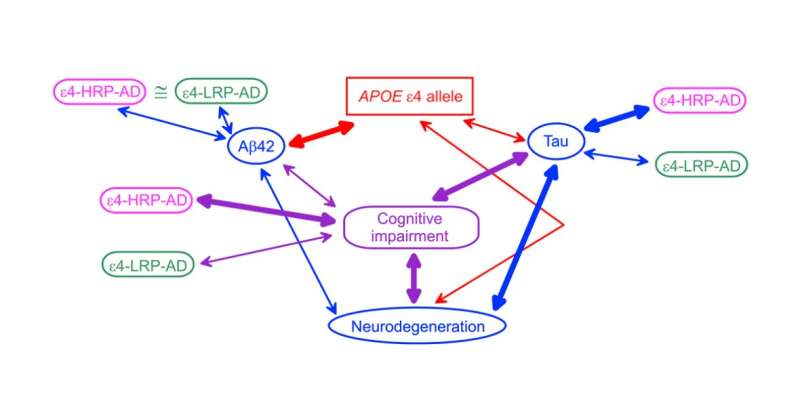 Capturing the genetic architecture of Alzheimer’s disease (AD) is challenging because of the complex interplay of genetic and non-genetic factors in its etiology. It has been suggested that AD biomarkers may improve the characterization of AD pathology and its genetic architecture. Most studies have focused on connections of individual genetic variants with AD biomarkers, whereas the role of combinations of genetic variants is substantially underexplored.

“Here, we examine the associations of the APOE ε2 and ε4 alleles and the AD-risk-differentiating compound genotypes comprising rs429358, rs2075650, and rs12721046 SNPs with Aβ40, Aβ42, and tau AD biomarkers measured in CSF and plasma using data from three studies: the AD Neuroimaging Initiative (ADNI), the Atherosclerosis Risk in Communities (ARIC) study, and the Framingham Heart Study (FHS),” write the researchers.

Findings from this study support associations of the ε4 alleles with both plasma and CSF Aβ42 and CSF tau, and the ε2 alleles with baseline, but not longitudinal, CSF Aβ42 measurements. The researchers found that the ε4-bearing polygenic profiles conferring higher and lower AD risks are differentially associated with tau but not Aβ42. Modulation of the effect of the ε4 alleles by TOMM40 and APOC1 variants indicates the potential genetic mechanism of differential roles of Aβ and tau in AD pathogenesis.