Last summer's bushfires exposed about three-quarters of the population to prolonged levels of smoke, causing 417 excess deaths and more than 1300 emergency hospital visits for asthma alone.

The preliminary assessment, published on Monday in the Medical Journal of Australia, found a "substantial" health impact in the fire-hit regions of the ACT, NSW, Victoria and Queensland between October 1 and February 10, 2020. 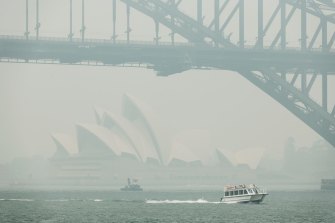 Bushfire smoke choked Sydney in December and many other parts of Australia over the past summer.Credit:James Brickwood

The researchers, led by the University of Tasmania, studied exposure to particulate matter of less than 2.5 microns in size using public air quality data. The highest reading of 98.5 microns on January 14 quadrupled the national standard and was 14 times more than the historical average.

To identify excess deaths, the researchers compared actual deaths, cardiovascular and respiratory-related hospitalisations and emergency response presentations with asthma against the levels that would be expected on any other day.

"The result was entirely predictable," said Fay Johnston, an associate professor at the University of Tasmania and one of the paper's authors. "It was not just the high concentration of pollution but also that it went on for so long."

The bushfires are estimated to have scorched about 12 million hectares across Australia, excluding the Northern Territory, and claimed directly about three dozen lives. The fires in NSW and Victoria alone were the largest since European settlement, researchers wrote last month, cloaking large areas in smoke for long periods.

At an individual level, the threat from pollution was low. However, much like the coronavirus, the people with the biggest health impacts tended to be the elderly and those with chronic illnesses. Professor Johnston said: "There's no good smoke and bad smoke."

Among the hospital presentations, 1124 were for cardiovascular problems and 2027 for respiratory ones, the paper found.

Professor Bin Jalaludin from the University of NSW school of public health and community medicine, and another of the paper's authors, said the excess death estimate was probably conservative.

"[W]e only looked at the outcomes where we have strong evidence," he said. "There are many other health effects caused by bushfires, for example, mental health effects, hospital admissions or [emergency department] visits for other conditions which we did not evaluate."

The paper says smoke is "just one of many problems that will intensify with the increasing frequency and severity of major bushfires associated with climate change".

"Expanded and diversified approaches to bushfire mitigation and adaptation to living in an increasingly hot and fire-prone country are urgently needed," it says.