The latest Netflix phenomenon is no doubt the docuseries “Cheer,” which follows Navarro College’s competitive cheer squad on its quest to win a national championship in Daytona Beach, Florida.

Viewers have expressed feeling inspired by the Texas college team’s story, fascinated by the characters’ lives and desperate for more. Many have also reminisced on their days in the cheerleading world or pondered getting back on the mat themselves.

As “Cheer” shows, there are many physical and mental benefits to cheerleading, but there’s also serious potential for drawbacks.

HuffPost spoke with experts to find out what exactly happens to your body and mind when you participate in the sport of cheerleading. Read on for the pros and the cons.

You become stronger and more flexible

“Physically, cheerleaders are strong and flexible, as they combine elements of dance and gymnastics,” said Lauren Hennessy, owner and director of MVP Mentality Sports Psychology in Boca Raton, Florida. “Additionally, they require a great deal of stamina to perform. … Cheerleaders may not always get the credit they deserve as athletes ― the sport requires a great deal of physical and mental strength, and bravery.”

Indeed, cheerleaders train their bodies to flip and twist, and combine these elements for stunts and routines. Through their training, they become more flexible and cultivate muscle memory.

Competitions like the championship shown in “Cheer” require intense training to master difficult routines. But Marc Lochbaum, a professor of kinesiology at Texas Tech University, noted that football game days can also be particularly demanding.

“I can’t think of a sport that has such an enormous variety of physical demands in an extended period,” he said. “You’ve got cardiovascular exercise for those long football games, but then also high-intensity interval training with the stunts. The high flyers have to be so ready, and the ones who do the holding are pretty darn strong. Cheerleaders are in incredible shape.” 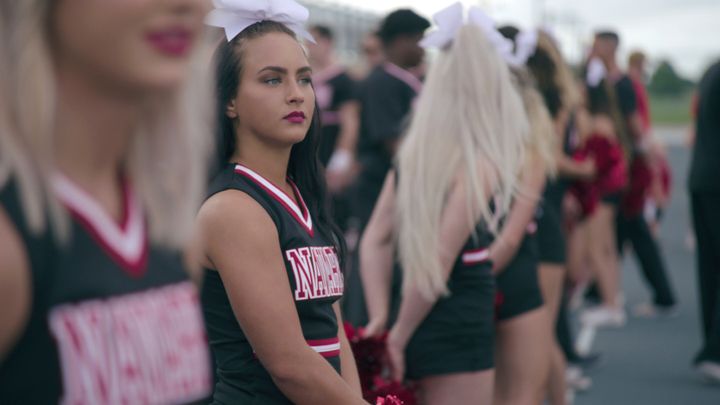 Your mind also gets stronger

Through their training, cheerleaders strengthen not only their bodies but also their brains.

“Similar to any elite skill training, cheerleading can strengthen important neural pathways in our brain,” said Chelsea Pierotti, a mental performance coach for dancers and an instructor in the department of psychology and neuroscience at the University of Colorado Boulder. “The brain’s neuroplasticity is its ability to change and adapt to our environment. Any time we train in an elite sport, of which cheerleading certainly qualifies, we will see changes in the brain at a neurological level which impact the mental toughness of these athletes.”

Hennessy noted that cheerleading offers many cognitive and emotional benefits, as athletes tend to have “highly fine-tuned” brains compared to nonathletes.

You feel a sense of social connectedness

“There is a social aspect of the sport that allows cheerleaders to feel connected with their teammates. Social connectedness in sports can help athletes deal with in-sport and out-of-sport stressors, increase motivation and improve interpersonal relationships,” Hennessy said.

In “Cheer,” the athletes often describe their team as a family and share how cheerleading saved them from toxic life circumstances. Having a social support system that feels like a family can be very healthy and good for personal development. But things can get a little dangerous when taken to the extreme.

“I think a big deal in cheerleading is this notion of identity, this sense of ‘I’m part of the team, I’m a cheerleader, this is what I do.’ In ‘Cheer,’ how many times did you hear something like, ‘If it weren’t for this team, who knows where I’d be?’” said Daniel Czech, a professor of kinesiology at Georgia Southern University. “Psychologically, you’ve got to be mindful of that a little bit because it can lead to unhealthy behavior out of desperation to remain part of that group which forms your identity.”

You increase your risk of significant injury

This one is obvious, but important to highlight. You’re at a major risk for severe issues like head trauma and broken bones when you cheer. That’s why it’s absolutely vital to have doctors and trainers involved in the process.

“Cheerleading is a sport that combines high levels athleticism with significant risk, especially in the area of competitive cheerleading where the stunts are growing increasingly more creative and challenging,” Hennessy said.

The injuries may be even more significant in cheerleading than in other sports because of the nature of the stunts and need for immense trust in yourself and your teammates.

“Hesitations and fear could result in a cheerleader not doing a skill the way they were trained and could increase the potential for injury,” Hennessy added. 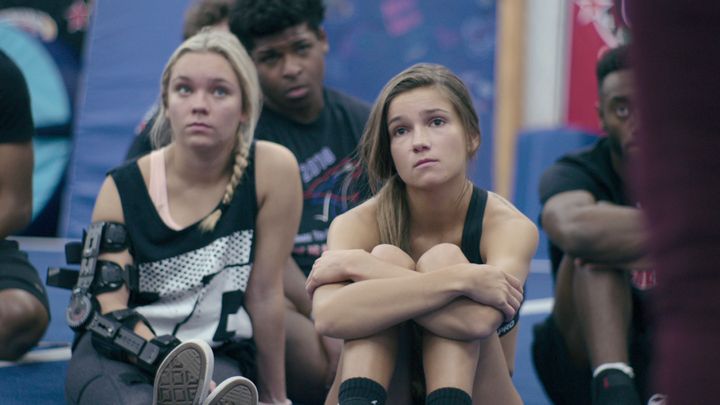 The identity issue that Czech observed can also play into the injury risk.

“When you put your identity into your role as a cheerleader and think cheerleading is the only thing that will help you grow as a person, there’s a motivation to participate through pain and do things you wouldn’t normally do,” he said. “You can have concussions, ligament injuries, bone breaks, all that kind of stuff, but it’s almost like a badge of honor. If you had a healthier self-concept, you think twice about repeating the stunt that caused the injury.”

Your body gets exhausted more easily

Cheerleading, especially in a college setting, can be absolutely draining. During certain sports seasons, cheerleaders are constantly going to games, on top of training during the week. They don’t get much of an off-season compared to other athletes. And while football and basketball players get some time on the bench, cheerleaders have to be “on” much more consistently.

“We’ve collected data at football games throughout the day, and it showed that the amount of time cheerleaders spent in moderate to vigorous physical activity was the cardiovascular equivalent of running a marathon or more,” Lochbaum said. “It makes sense because the game day is so long ― about six hours from the pregame excitement all the way to the end without a lot of breaks.”

Lochbaum also noted that dehydration is a risk on long game days, and that there’s a sense of emotional exhaustion as well with the ups and downs of the action. The fatigue can make it harder to keep up with the demands of school and lead to poorer performance. It increases the risk of injury as well.

“It’s just the full experience of physical and emotional outlay,” he said. “Imagine running a marathon, plus having that emotional experience of the game, plus workouts during the week, and then having to be a student and take a math test.”

Your self-esteem can plummet

The mental and emotional effects of the sport look different in different cheerleaders and often depend on the coach’s approach. In many cases, cheerleading is brutal on the athlete’s self-esteem and mindset.

“When coaches and/or parents and peers focus on the physical image of a cheerleader, or the inability to hit a skill for example, it is devastating to an athlete’s self-esteem,” Pierotti said. “As a coach, everything you say becomes their inner voice. So if a cheerleader consistently hears that she doesn’t look right, or he isn’t strong enough, that will be the message they start saying to themselves.”

Negative messages from coaches, parents and teammates can foster negative self-talk in cheerleaders who may develop degrading personal mantras, lack of motivation, decreased skill level and even mental health disorders like severe depression and anxiety.

“The body image issue is a major one, especially with the outfits cheerleaders wear and so forth” Czech said. “The psychology behind that can be very detrimental and can cause eating disorders, exercise addiction and other negative things.”

But it can also soar

On the other hand, cheerleaders can develop positive self-talk and a healthy growth mindset if they hear positive messages about effort, growth, persistence, progress and belonging. These good messages can change pathways in the brain and in turn, boost self-esteem and even athletic performance.

“Let’s take Morgan for example from Navarro Cheer. At first, she is an alternate and not on the mat. But pay attention to what Coach [Monica] Aldama and Morgan’s teammates keep saying to her,” Pierotti said. “Coach communicates how much she believes in Morgan, even when Morgan isn’t so sure herself. Her teammates, especially Jerry, because he’s Jerry, yell positivity onto the mat and tell Morgan she’s good enough to do the skills asked of her.” 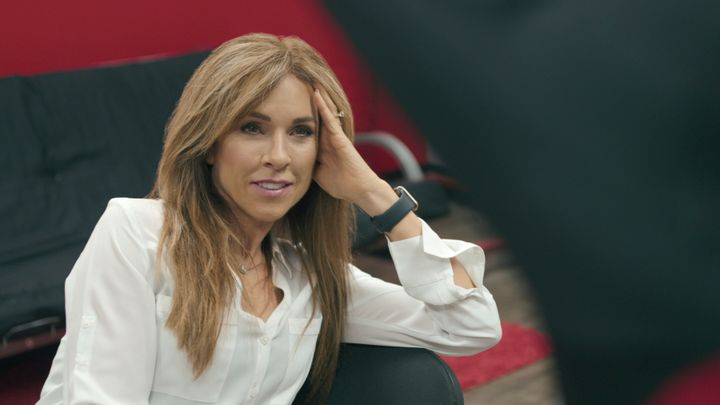 “Now it’s likely Morgan came onto the team with a growth mindset because of her own personality, history and desire for excellence, but the team helped encourage it,” she continued. “Even through pain and challenges, Morgan doesn’t quit. The trademark of someone with a growth mindset is that they believe effort is always worth it and hard work breeds talent.”

Indeed, there’s a joy and confidence boost in setting a goal to do a specific stunt and then achieving it through hard work and perseverance. And of course, physical activities like jumping around can release brain chemicals that promote feelings of happiness. The rise in confidence and self-esteem often also extend beyond the sports context.

“Athletes can find success in many areas of their life as they find success in their sport,” Hennessy said. “They internalize a sense of mastery and control, which can help to navigate various situations with less anxiety.”

Pierotti believes the finale of “Cheer” captures the power of esteem-boosting growth mindsets.

“When the team takes the mat for finals in Daytona, imagine what it’s like to be backstage waiting for your team to be called to the floor. What would be going through your mind? For many athletes it’s a feeling of panic and fear,” she explained. “You’ve trained for months for two minutes on the floor. You get one chance. That feeling of panic carries with them on the floor and they are likely to underperform, or downright choke.”

But teams like Navarro that encourage a growth mindset and focus on mental preparation for competition can better handle the intense pressure of the moment.

“This is what sports like elite cheerleading can do for us mentally,” she said. “With good coaching and the right culture, athletes learn to persevere when there is a challenge, work together for a common goal, and believe in their own ability to learn and achieve.”