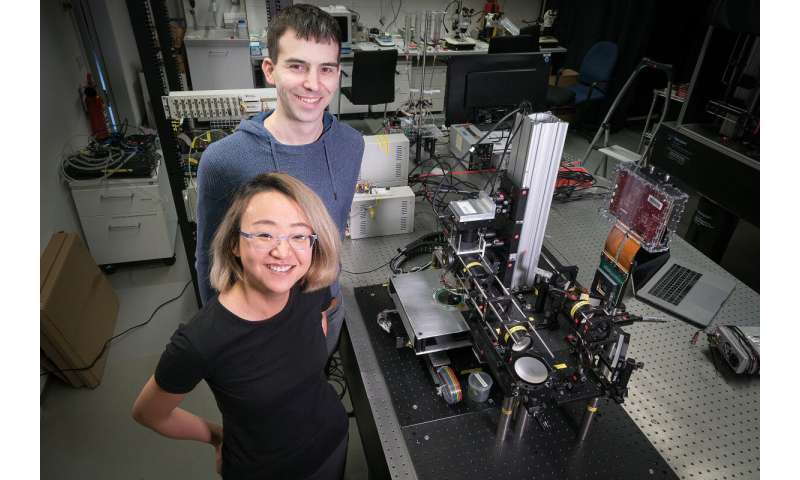 It might be complicated, but the concept is as simple as a light switch.

A team of researchers led by two Harvard alumni have uncovered a switch-like mechanism in the brains of larval zebrafish that flips their brains between two distinct motivational states—one a highly focused hunting state and the other an easily distracted, exploratory state.

The findings, which they detail in the journal Nature, can begin to shed light on how the brain switches between internal states and coordinates this brain-wide shift, leading to dramatic changes in motivation, focus, and behavior for specific time periods.

“As soon as you have more than one objective in life [that the brain has to solve], you have a tug of war. You have a conflict,” said Drew Robson, Ph.D. ’13, one of the paper’s lead authors and a former fellow at Harvard’s Rowland Institute, where most of the research took place. “The brain has to have some way of deciding who’s actually in charge right now. Which objective should I prioritize at this moment in time?”

How the brain does this has long been a mystery because it happens deep in the brain where it is difficult to image, especially in complex animals such as humans. That is one of the reasons zebrafish have become model organisms for brain researchers, like Robson. A larval zebrafish, with 100,000 neurons in its brain and a limbic system similar to humans, has thin and transparent skin that allows scientists to analyze its neural activity using a microscope.

In the study, the researchers describe using a tracking microscope to pinpoint a hub of serotonergic neurons buried deep in the brains of zebrafish where they believe the switch lies that controls this type of decision. This hub is in the zebrafish’s dorsal raphe, a tiny cluster of neurons that sits at the base of the brain and has a reach that stretches through most of the brain. These neurons act as a master regulator for the zebrafish’s motivational state.

“Normally, when you think of how neurons talk to each other, you have one neuron that makes a selective set of connections to other neurons. That’s not how these cells work,” said Jennifer Li, Ph.D. ’13, another lead author and also a former fellow at the Rowland Institute. “When these cells fire, almost all other cells in your brain are listening. They are not a way to communicate narrowly from one information channel to another. They send a signal that gets broadcast to your entire brain.”

This makes sense, Li said, because this type of system is exactly what’s needed to set a global brain state. It’s also interesting that the brain naturally sets a timer for this, she added.

When a zebrafish’s priority is to hunt, the switching mechanism leaps into action, making the zebrafish not only a more motivated but a more effective hunter, because cells in the brain that amplify motor functions related to hunting—like making highly precise turns —are also heightened. This state lasts about 5 to 8 minutes and, in a chart, looks like a triangle. “It shoots up to a really high level and slowly winds down, like the discharging of a battery,” Robson said.

In the opposing state, when the signal fully discharges, skills and desires related to hunting are suppressed and the animal seems more interested in exploring its environment and covering longer distances. In this state, even if the zebrafish is hungry and presented with prey, it is routinely inattentive to it, demonstrating a different set of internal priorities. In fact, when it tries to hunt in the exploratory state, the researchers report the fish is more likely to fail.

The researchers hypothesize that the zebrafish makes this switch because it is balancing two competing priorities: eating and not being eaten. The findings call into play the questions of how long a focused state can be maintained, and even controlled.

“You don’t want an animal to be perfectly focused for an infinite amount of time, because that isn’t how an animal has to survive in the world,” Li said. “They have to switch out of that state so that they can balance all of their other objectives in life.”

The design of the experiment—begun at the Rowland Institute in 2017, where the researchers led a joint laboratory, and finished this September after they moved their lab to the Max Planck Institute for Biological Cybernetics in Germany—was deliberately simple. The tracking microscope followed the zebrafish in an arena more than eight times their body size while they swam and hunted without interruption for 50‒80 minutes. The researchers put the prey (paramecia) in the same arena and then watched what the zebrafish did. When they analyzed the neural data, they spotted the link between the dynamics of the switching mechanism and the animals’ behavior. Their driving question was whether this hunt-or-prey behavior was random or more organized.

The results raise questions about how different areas of the brain listen to and interpret signals from the regulator-like hub.

“What we think, based on the results from the paper, is that selective parts of the brain become more activated in response to the broadcast signal, but other cells in the brain are suppressed by the same signal.” Robson said. “So even though you are broadcasting the same message, how it’s interpreted seems to vary greatly in different cells in the brain.”

The researchers hope these implications, along with why and how this switching mechanism has been preserved across evolution, can be analyzed in future studies. Serotonergic cells are present throughout the animal kingdom, from worms to fish to mammals, and there is evidence that worms may have a simplified version of the brain-state switch, and mammals, including humans, a more complex one. Though a major difficulty will be comprehensively recording deep regions of the brain like the dorsal raphe in the more-complex animals, the researchers hope that their findings can be used to identify and study other internal-state switches.