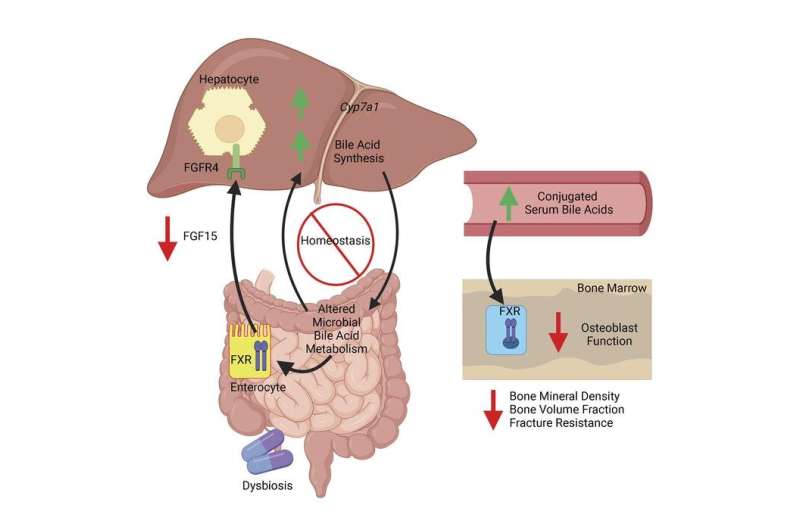 During adolescence, sex hormones drive significant physiologic changes. One of the most universal and sometimes distressing experiences during adolescence is the development of acne, a skin condition that results from the plugging of hair follicles with oil and dead skin cells. For some individuals whose acne is resistant to topical therapies, systemic antibiotics are used to help to alleviate symptoms and clear up the skin.

Treating acne with systemic antibiotics, such as minocycline, often requires long-term use—sometimes up to two years; however, the effects of such long-term use of antibiotics are unknown. Researchers at the Medical University of South Carolina (MUSC) show in work published online on Nov. 22 in the Journal of Clinical Investigation (JCI) Insight that there is a strong link between the makeup of the gut microbiome—a community of microorganisms that live together in the gut—and healthy skeletal maturation. Long-term use of a systemic antibiotic, such as minocycline, may have unintended consequences during the critical stage of adolescent bone development.

“There are sustained changes to the gut microbiome following long-term systemic minocycline therapy that lead to reduced bone maturation,” said Matthew Carson, first author on this study and graduate student studying the effects of the gut microbiome on skeletal development in the Novince lab.

“From a clinical perspective, not only is minocycline treatment causing changes to the maturing skeleton, the microbiome and the skeleton aren’t able to recover fully after antibiotic therapy,” added Chad Novince, D.D.S., Ph.D., principal investigator and associate professor in the Department of Oral Health Sciences in the College of Dental Medicine.

This work builds on previous work from the Novince lab that showed a high-dose antibiotic cocktail activated a proinflammatory immune response that increased the activity of bone-eating osteoclasts and impaired bone maturation. Findings from this study led the Novince team to ask if there were clinical scenarios in which systemic antibiotics might have effects on the maturing skeleton.

They learned that physicians prescribe minocycline as a systemic antibiotic therapy to treat adolescent acne. Minocycline is a member of the tetracycline class of antibiotics, which also includes tetracycline, doxycycline and sarecycline. These antibiotics work by preventing the growth and spread of bacteria; in acne, they kill the bacteria that infect pores and decrease certain natural oily substances that cause acne.

To determine whether systemic minocycline treatment would have similar effects on the skeleton as previous antibiotic treatments had, Carson and Novince administered a clinically relevant dose of minocycline to mice during pubertal/postpubertal growth—the equivalent age of adolescence in humans. They found that minocycline therapy does not cause any cytotoxic effects or induce a proinflammatory response—as they observed previously; however, there were changes in the composition of the gut microbiome that caused decreased bone mass accrual and impaired skeletal maturation.

In and of themselves, these data highlight an important but underappreciated consequence of long-term systemic antibiotic use during adolescence. But they also went on to show that long-term minocycline therapy prevented the ability of the gut microbiome and skeleton to recover to a stable state even after the therapy was stopped.

Early research had suggested that our gut microbiome develops into a mature state in the first few years of life, but this idea has recently been called into question, with recent investigations showing that the gut microbiome continues to develop into a stable, mature state during adolescence.

“What’s really interesting is if you cause changes to the microbiome during this adolescent phase when your microbiota is still progressing toward a stable adult state, you’re going to have profound effects on the maturing skeleton,” explained Carson.

In puberty, we accrue up to 40% of our peak bone mass, which correlates with the maturation of our microbiome. If we disrupt the system during this critical window of growth and reduce our peak bone mass, we may no longer be able to weather the storm of natural bone loss as a consequence of aging. Therefore, disruption of the microbiome during puberty can have a long-lasting impact on skeletal health and fracture risk.

The Novince team further analyzed how the microbiome could communicate with and change the structure of the skeleton. Surprisingly, altering the gut microbiome with minocycline disrupted the normal communication between the liver and the small intestine. This communication centers around small molecules called bile acids.

Normally, bile acids travel from the liver to the small intestine to aid in digestion and help to break down fats, but this view of bile acids is expanding.

“Bile acids had not previously been considered as important communication molecules between the gut and the skeleton,” said Novince. “By changing the gut microbiome, the makeup of the bile acids is altered, which influences host physiology, including skeletal maturation.”

The gut microbiome continuously modifies the pool of bile acids in the small intestine. The bile acids then act as messenger molecules and communicate with host cells in the intestine and at distant anatomic sites. For example, bile acids can stimulate bone formation when they talk to osteoblasts.

Interestingly, the altered gut microbiome resulting from minocycline treatment generated a different pool of bile acids. This different profile of bile acids failed to activate bone-forming osteoblasts and caused a significant decrease of more than 30% in bone formation and mineralization.

This work exemplifies the benefits of a cross-disciplinary approach to science.

“This was truly collaborative science, which is where I think we’re at today,” said Novince. “To drive high-impact science, you need to bring in experts from different professions and disciplines. We were fortunate to have a really strong team. It was fun—the whole thing was exciting.”

In summary, this work strengthens the importance of the gut-liver-bone communication network. It reveals that systemic minocycline therapy has unintended, profound and life-long effects on the skeleton.

“Treatment of adolescent mice with minocycline caused a change in the gut microbiome and altered bile acid metabolism,” summarized Carson. “We found that the change of these bile acids inhibited osteoblast function and impaired skeletal maturation.”