‘You can see the destruction’: Virtual reality video reveals how coronavirus damaged the lungs a critically ill American patient in his 50s

Doctors at George Washington University 360-degree virtual reality technology to visualize the lungs of a COVID-19 patient who was transferred to their hospital.

Just days before the images were taken, the patient, a man in his 50s, had no symptoms whatsoever.

But by the time he was in the care of Dr Keith Mortman, chief of thoracic surgery at the hospital, disease had wreaked havoc in his lungs, clearly visible in the images as swaths of cloudy, green swaths of damaged tissue. 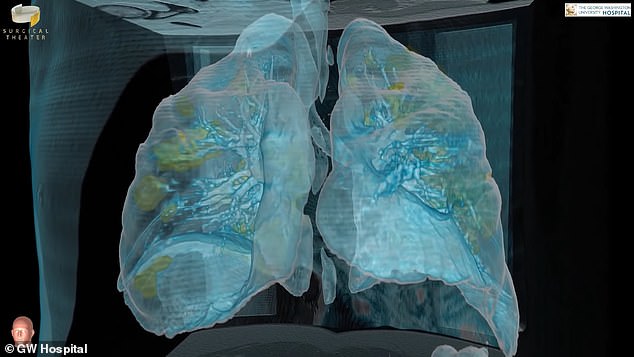 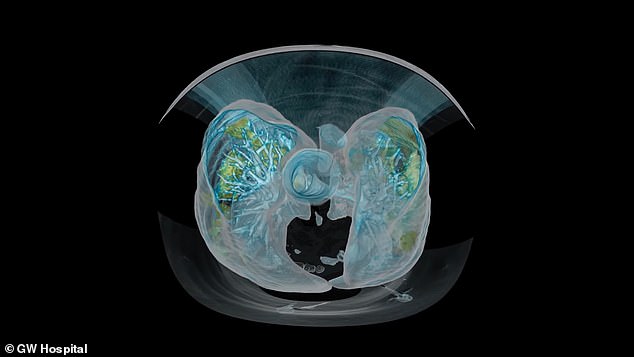 From above, the contrast between the infected lung tissue and the blue bronchial tree is clear

The man had been diagnosed with COVID-19 and put into isolation at another hospital, where he had nothing more than cold-like symptoms: fever, cough and shortness of breath.

But within days, his condition started to deteriorate rapidly.

Doctors at his original hospital placed the man on a ventilator, but even that wasn’t enough and he was transferred to George Washington University (GWU).

Dr Mortman and his team converted scans of the man’s lungs in to a virtual reality video that recreated the man’s chest cavity in three-dimensions in 360 degrees. 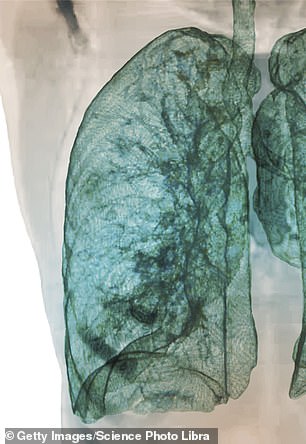 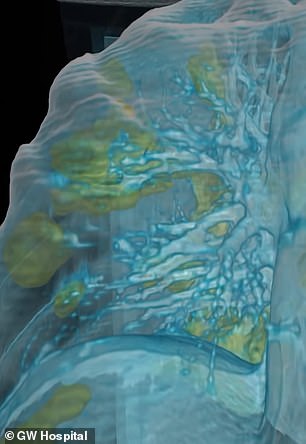 A scan shows how a healthy lung should look, with light blue colorization showing healthy, clear tissue (left). The coronavirus patient’s lungs are clouded with many areas of infection (green)

WHAT ARE THE SYMPTOMS OF CORONAVIRUS?

Like other coronaviruses, including those that cause the common cold and that triggered SARS, COVID-19 is a respiratory illness.

Although having a runny nose doesn’t rule out coronavirus, it doesn’t thus far appear to be a primary symptom.

Most people only become mildly ill, but the infection can turn serious and even deadly, especially for those who are older or have underlying health conditions.

In these cases, patients develop pneumonia, which can cause:

Avoid people with these symptoms. If you develop them, call your health care provider before going to the hospital or doctor, so they and you can prepare to minimize possible exposure if they suspect you have coronavirus.

In the video, some lung tissue appears clear and colorized a light, translucent blue.  the bronchial tree – the system of airways that runs into and throughout the lung – is a more solid, strong blue, in most places.

But green-colorized inflamed tissue is clearly visible in many places throughout both lungs.

‘It’s such a contrast that you don’t need an MD after your name to understand these images,’ said Dr Mortman.

‘It’s not isolated to any one part of the lung, there is damage to both lungs, diffusely.

‘You can see the destruction that is being caused in the lungs and why these patients’ lungs are failing to the point of needing a mechanical ventilator.’

So far, about 80 percent of US COVID-19 patients develop only mild infection and symptoms.

The other 20 percent have to be hospitalized, and of them nearly 14 percent become severely ill. Just over six percent fall into critical condition and their lugs may fail.

‘It starts off as this viral infection then it becomes severe inflammation in the lungs and when that inflammation does not subside with time, it becomes, essentially, scarring…creating long-term damage and it could really impact somebody’s ability to breathe in the long-term,’ explained Dr Mortman.

Coronavirus moves from the upper respiratory tract – the nose, mouth, throat and upper portion of the lungs -down into the deeper reaches of the lungs.

Pneumonia is the inflammation of this lower region of the lungs. The alveoli, little air sacs responsible for the exchange of carbon dioxide and oxygen, may fill with liquid or pus, making it difficult to breathe. 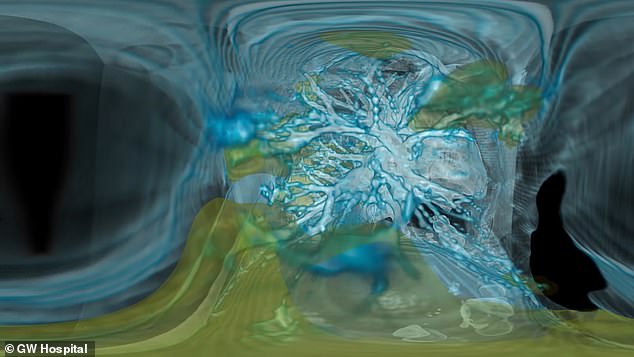 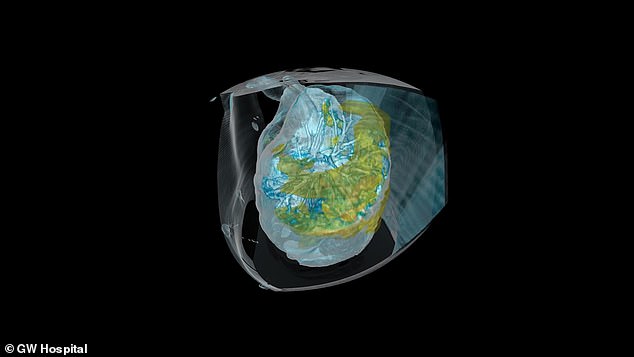 That’s where ventilators come in, but they’re in short supply in the US where state governments and hospitals are all vying for the limited number available to treat their sickest patients.

Although seniors and people with underlying health conditions – especially respiratory ones – are most at-risk, it’s something happening to younger people, including the GWU patient, too.

‘Young people are becoming infected with the virus and we’re seeing more and more reports every day of younger patients being admitted to hospitals,’ said Dr Mortman.