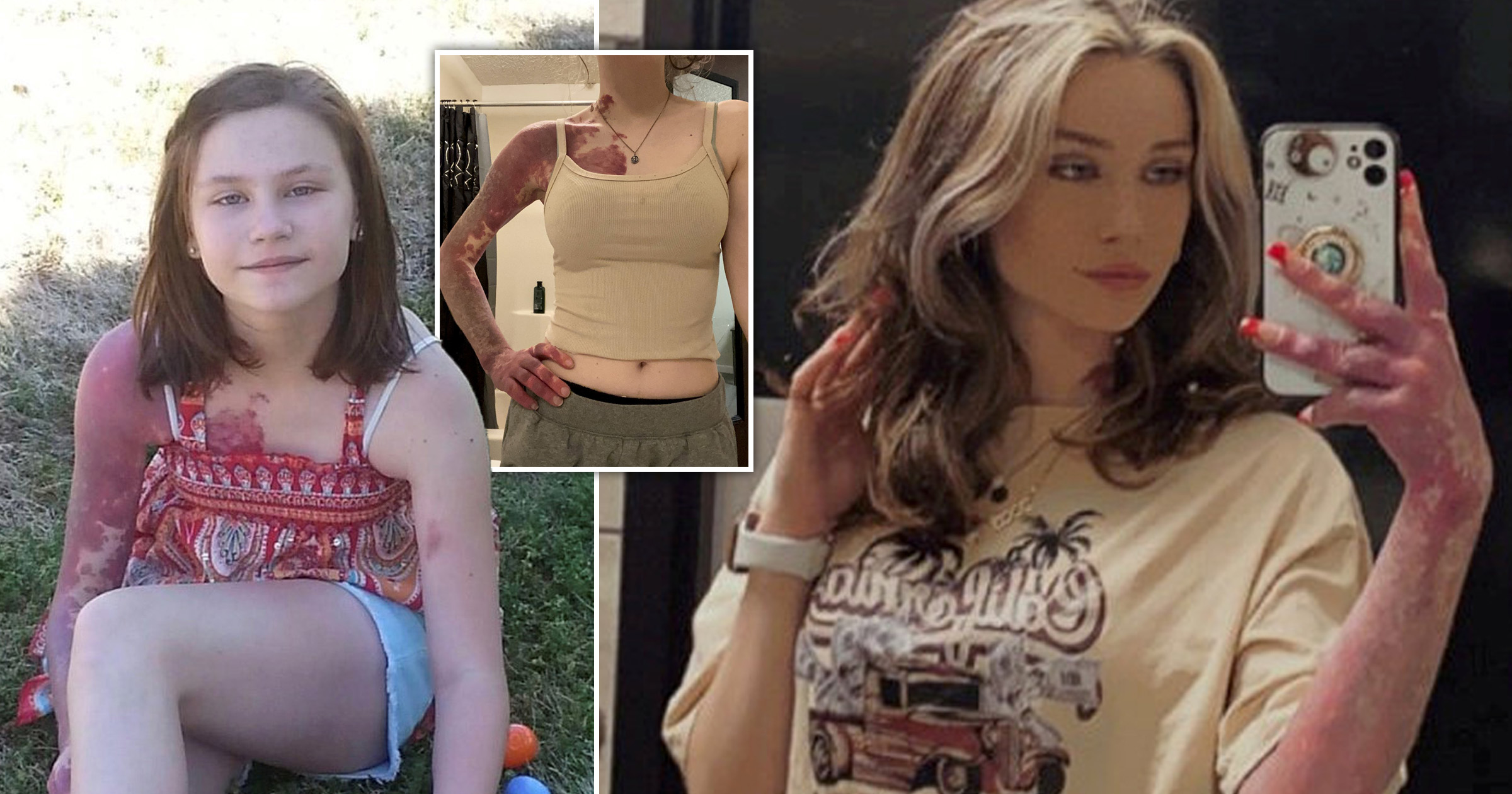 ‘I want to help other girls and make sure they don’t lose their childhood like I did,’ says 19-year-old Lexi Chapman.

‘I missed out on playing sports, going to football games and parties and I regret it so much, I have no happy memories from that time.’

Lexi was born with a rare skin condition on her left arm which, up until the age of 18, she thought was a port wine stain birthmark (which are usually harmless).

However, when she began to lose feeling in her arm and feel pain, Lexi – a phlebotomist from Atlanta, Georgia – knew something was wrong.

Encouraged by her boyfriend, she decided to look further into her birthmark.

Lexi found she had Klippel-Trenaunay syndrome (KTS), a rare condition causing triple the amount of blood vessels which, if left untreated, can be fatal and shorten someone’s life expectancy by 30 years.

KTS causes the bones and muscles to deteriorate, and Lexi was warned her arm will shrink over time.

Lexi now receives treatment every four to six weeks to treat her condition but says there is constantly a threat of blood clots.

She was able to get laser skin removal to help her condition, which is also managed by sclerotherapy – and medics inject her with a solution to disintegrate her extra veins every four to six weeks.

Following the sclerotherapy, Lexi has to have a camera down her throat and two small cameras down her back to check she hasn’t developed new blood clots.

Often Lexi loses feeling in her arm and hands and suffers with migraines.

However, she says: ‘Although I am constantly scared I could have a blood clot that kills me, I was relieved to get a diagnosis meaning my condition can be treated properly.’

Lexi was bullied all the way through high school, which she said made the learning environment a ‘living hell’ and eventually prompted her to leave school and ‘never return’ aged 16.

‘I was a happy child throughout primary school, and I didn’t care about my condition,’ says Lexi.

‘As soon as I went to a different school and got to the age of 11, things rapidly changed.

‘I would cover up and wear long-sleeved high neck shirts to try and hide my skin, but nothing worked.

‘They would call me a freak and say I had hickeys, I even received death threats.’

Sadly, Lexi suffered from anxiety, depression and suicidal thoughts through her teen years but is now, thankfully, on a path towards self-love, and is bringing people along on her journey.

‘I’ve had therapy and now I know how to deal with negative thoughts,’ she says. ‘I’m now confident and I wear short sleeves and tank tops.’

Now Lexi is a mental health and body confidence advocate and helps young girls to feel comfortable in their own skin on social media and in real life.

‘I go out to local schools and girls’ clubs to talk about my experience and to try and give others the tools to overcome any negative thoughts they have about themselves,’ she says.

‘I get so many messages from girls who reach out to say they hate their appearance.

‘I want everyone to know they are beautiful in their own special way.’

She adds: ‘I am happy I am finally at peace with my appearance, and I want to help to inspire other girls to overcome their body confidence issues.’