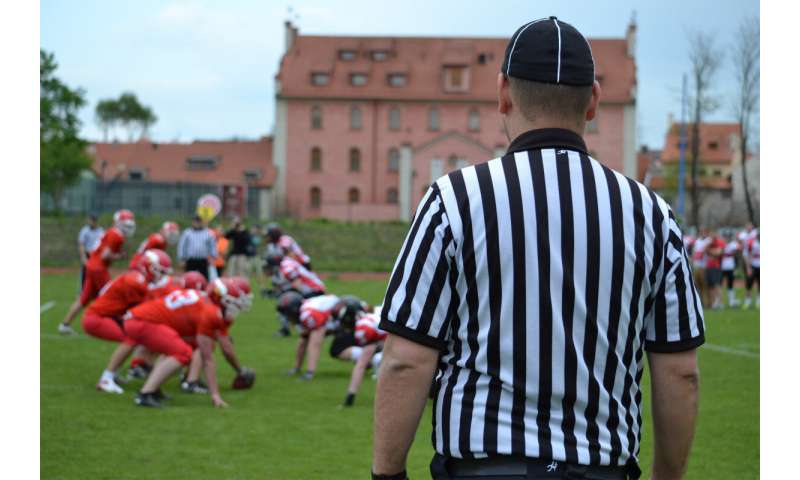 A Massachusetts woman hung up her whistle and high school soccer referee jersey after almost a decade on the job, fed up with ongoing abuse from parents and coaches, the Boston Globe reported recently. It’s a familiar story. According to a 2017 survey by the National Association of Sports Officials, adult behavior is the reason more than 75 percent of all high school referees quit. The report also found that 80 percent of new officials stop after only two years. Many say the problem is contributing to a shortage of high school referees nationwide, and extends to the youth sports level. Richard Weissbourd is a psychologist and senior lecturer at the Harvard Graduate School of Education, where he co-directs the Making Caring Common Project, which focuses on moral and social development priorities in child raising. The Gazette spoke with him about the problem and what can be done to fix it.

GAZETTE: Despite efforts to control angry or verbally abusive parents on the sidelines of youth sporting games and events across the country, why does it continue to be such a problem?

WEISSBOURD: This is a puzzle with many pieces and there a lot of different things that are going on. I think it’s because sometimes parents are wanting to compensate for their shortcomings or live out their own fantasies about sports. I think it’s the degree to which we are becoming less communal and more tribal and more individual. Some people are feeling more Darwinian, like this is a survival-of-the-fittest kind of contest, and there isn’t a sense of commitment to the larger whole. I think it’s the degree to which, in the media, we have reinforced the tendency to demean and degrade people whom we disagree with—that’s too often the nature of our public discourse now. It’s been legitimized and normalized in ways that are concerning. I think we used to live in a culture where there was much more of an expectation that you showed respect even when it was hard, when our notion of morality meant doing things that are hard like thanking the referee even when you didn’t feel like thanking them. I’m concerned that many parents just don’t have the inclination. They don’t think about doing things that are hard as a way of modeling for their kids. There’s also this allergy to losing and to failure that we have in the culture. And I think it’s a president who divides the world into winners or losers. More and more it appears that idea is in the culture. What’s really concerning to me is the degree to which these things become normalized. We need communities of parents that really provide those parents with feedback and support and regulate them to some degree.

GAZETTE: What’s really at risk for kids when they see these kinds of actions by the people who are supposed to be setting an example by modeling good behavior?

WEISSBOURD: It sends all the wrong messages. What you really want to be modeling for your kid in a situation like this is that the referee is doing a job that is largely thankless. It’s not a well-compensated job. We should be grateful to them. You should be modeling for your kids that sometimes people make mistakes and when they do, you may want to point it out to them, but you do it in ways that are generous and constructive. You should let them know this ref isn’t trying to make a mistake. And you need to model for your kids that you’re not going to suddenly lose control. It’s a scary thing for a kid when their parent is so out of control.

GAZETTE: In addition to parents getting involved and calling out bad behavior on the sidelines, what can be done? Should kids try to address the situation in some way?

WEISSBOURD: It’s really hard for kids to take on an adult in a situation like this, but they can talk to their own parents about it. I do think that every league should have a compact with parents of one kind or another that spells out what the league’s role is in promoting ethical character and what appropriate parent behavior is, because some parents really don’t know. There are differences in cultures and the way people interact with sporting events. And that compact should be revisited periodically so it lives and breathes; it’s not just another form. So, I think it’s important to spell out what constructive and appropriate behavior is. It’s also about encouraging parents to do things like thank the coaches, or thank the referees. It’s providing red flags for parents. If your partner is embarrassed to sit with you during the game, that should be a red flag for you. If you’re spending all of your free time talking about who won the last game, that should be a red flag. If you’re finding yourself really stressed about whether your kid’s team is going to win, that should be a red flag. If your kid is not eating or sleeping well because they are stressed about performing well on a team they are on, that’s a red flag. And I know some of the good sports organizations do provide information for coaches around working with parents, and that can be really helpful.

GAZETTE: I wonder if you think the notion of winning is just so ingrained in our culture, in our history, in the story of our nation’s founding, that’s it going to be impossible to change?

WEISSBOURD: I think we’re out of balance. If you look throughout American history, this is what books like “Habits of the Heart: Individualism and Commitment in American Life” are about. There has always been this tension between individualism and a strong collectivist ethic in America, a strong sense of nationalism and community, a strong sense of responsibility for our neighbors. In many eras of this country it was mothers’ primary responsibility to prepare children to be good citizens—it should have been fathers’ too. Schools and most colleges in this country were founded primarily to cultivate ethical character. That is no longer true of parents, schools, or universities. And in our research data when we ask kids “What’s most important to you?” they are far more likely to say achievement than caring. And they are far more likely to think their parents value achievement over caring. I don’t think that was true in other times in our history, based on what I hear from child historians. There was this ethic of sacrifice in homes and schools that you don’t see nearly as much anymore. Robert Putnam’s work is about this decline in communal connection and so, in a sense, is Sara Konrath’s work on declines in empathy. I don’t want to overstate it because I still think there are strong collective impulses in America. People still believe in community, but I do think we’re out of balance.

GAZETTE: Does religion have a role to play?