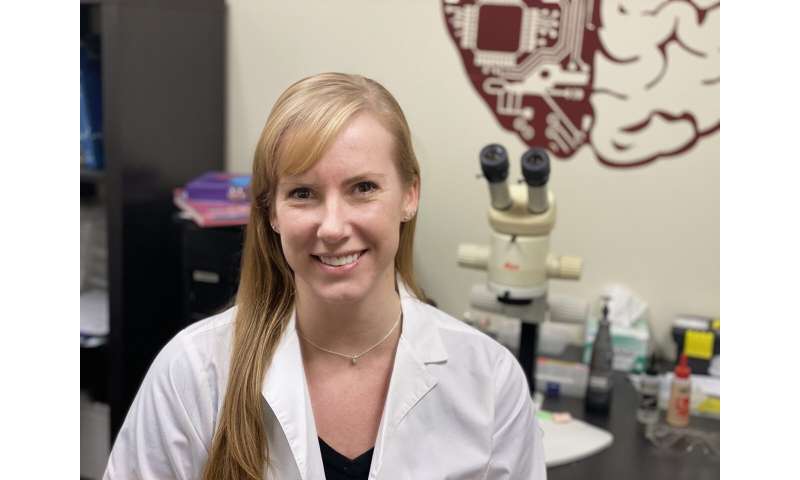 Compulsive drinking may be due to dysfunction in a specific brain pathway that normally helps keep drinking in check. The results are reported in the journal Biological Psychiatry.

In the United States, 14 million adults struggle with alcohol use disorder (AUD)— formerly known as alcoholism. This disorder makes individuals unable to stop drinking even when they know the potential risks to health, jobs, and relationships.

“Difficulty saying no to alcohol, even when it could clearly lead to harm, is a defining feature of alcohol use disorders,” said Andrew Holmes, Ph.D., senior investigator of the study and Chief of the Laboratory on Behavioral and Genomic Neuroscience at the National Institute on Alcohol Abuse and Alcoholism (NIAAA). “This study takes us a step further in understanding the brain mechanisms underlying compulsive drinking.”

Many complex parts of behavior—emotion, reward, motivation, anxiety—are regulated by the cortex, the outer layers of the brain that are responsible for complex processes like decision-making. Unlike drugs like cocaine, alcohol has broad effects on the brain, which makes narrowing down a target for therapeutic treatment much more difficult.

“We want to understand how the brain normally regulates drinking, so we can answer questions about what happens when this regulation isn’t happening as it should,” said Lindsay Halladay, Ph.D., Assistant Professor of Psychology and Neuroscience at Santa Clara University, and lead author of the study.

To study how the brain regulates drinking, Halladay and colleagues trained mice in the lab to press a lever for an alcohol reward. Once trained, the mice were presented with a new, conflicting situation: press the same lever for alcohol and receive a light electric shock to their feet, or avoid that risk but forfeit the alcohol. After a short session, most mice quickly learn to avoid the shock and choose to give up the alcohol.

Halladay’s team first used surgically-implanted electrodes to measure activity in regions of the cortex during that decision.

“We found a group of neurons in the medial prefrontal cortex that became active when mice approached the lever but aborted the lever press,” said Halladay. “These neurons only responded when the mice did not press the lever, apparently deciding the risk of shock was too great, but not when mice chose alcohol over the risk of shock. This means that the neurons we identified may be responsible for putting the brakes on drinking when doing so may be dangerous.”

The medial prefrontal cortex (mPFC) plays a role in many forms of decision-making and communicates with many regions of the brain, so Halladay’s team explored those external connections.

The team used optogenetics, a viral engineering technique that allowed them to effectively shut down precise brain pathways by shining light in the brain. They shut down activity of cells in the mPFC that communicate with the nucleus accumbens, an area of the brain important for reward, and found that the number of risky lever presses increased.

“Shutting down this circuit restored alcohol-seeking despite the risk of shock,” said Halladay. “This raises the possibility that alcohol use disorder stems from some form of dysfunction in this pathway.”

Understanding compulsive drinking in some people relies on identifying the neural pathway that keeps drinking in check.

“Current treatments just aren’t effective enough,” said Halladay. “Nearly half of all people treated for AUD relapse within a year of seeking treatment.”