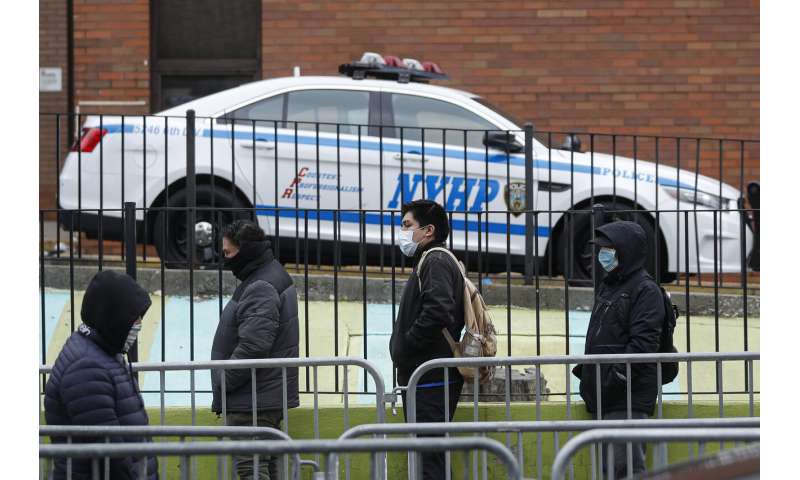 In New York City, they’ve started dismantling basketball hoops to prevent people from gathering in parks and playing. In Lakewood, New Jersey, police broke up a wedding being held in violation of a ban on large gatherings. And in Austin, Texas, officers are encouraging people to call a hotline to snitch on violators of the city’s orders for people to stay home.

Police departments are taking a lead role in enforcing social distancing guidelines that health officials say are critical to containing COVID-19. Along with park rangers, fire inspectors and other public servants, officers more accustomed to chasing suspects and solving crimes are spending these troubled days cajoling people to stay at least 6 feet apart.

The no-more mandate has forced the New York Police Department—a squad that normally prides itself on protecting packed crowds like the ones at the Times Square New Year’s Eve celebration—into service dispersing small groups of people on city streets and public spaces.

Instead of the threat of terrorism, they’re trying to stop the spread of a silent killer that as of Thursday had left more than 1,000 people dead in the U.S., at least 280 of them in New York City—all while trying to avoid using a heavy hand. 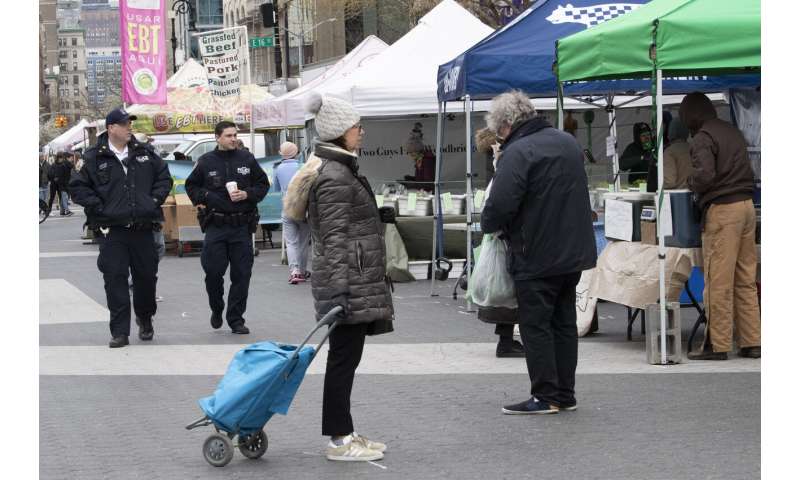 For starters, the nation’s largest police department made thousands of visits to bars and restaurants to make sure they were observing a shutdown of dine-in services imposed this month, resulting in warnings but only a handful of citations.

Now comes an effort to impose restrictions in parks, playgrounds, housing project courtyards and sidewalks, where some people to congregate out of habit or indifference as temperatures rise. On Wednesday, de Blasio said the city was removing basketball hoops at 80 of its 1,700 public courts—places where he said people were ignoring instructions not to shoot around with anyone outside their household.

Enforcement also will include marked patrol cars driving through Brooklyn’s Prospect Park and other popular outdoor escapes around the city, broadcasting recorded reminders about the importance of social distancing.

NYPD video shot in Manhattan’s Lower East Side and posted on Twitter showed a squad car slowly rolling down a nearly empty street—occupied by just two people running on opposite sides of the street—and playing a message that implores, “Please help us keep you safe.” 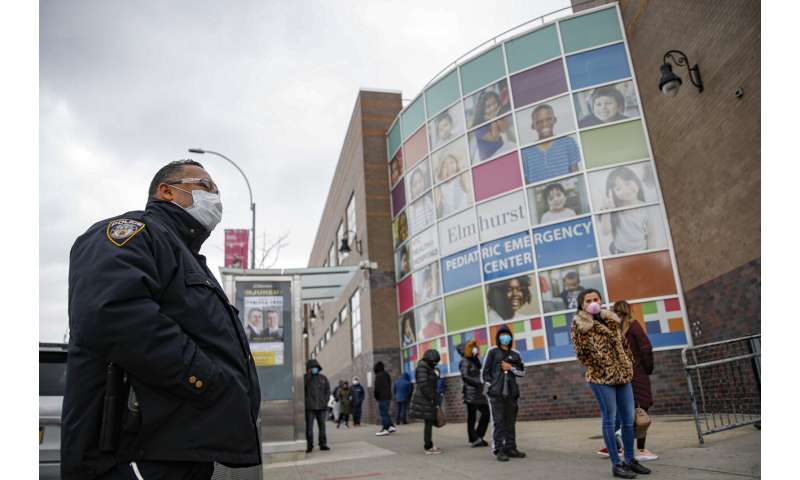 In addition, the city is mobilizing departments to form roving enforcement teams for the effort, including members of the fire and parks departments and the mayor’s community affairs unit.

People are not being discouraged from getting out for a breath of fresh air solo, as couples or as families. But other activities like team sports or gatherings like outdoor family barbecues are going to be shut down, de Blasio said.

“If we see people in groups, we’re going to break them up,” he said. “If we see a place that’s too crowded, we are going to get people to disperse.”

De Blasio said he would even consider closing playgrounds as soon as Saturday if families don’t follow new rules to “not overcrowd them” or allowing “kids playing with kids outside their own family.”

In New Jersey, police charged three people in recent days for holding large gatherings in defiance of a state ban. In San Jose, Calif., officers have checked 369 businesses for compliance and issued their first citation on Wednesday. If the city’s parks and trails continue to be crowded with residents, authorities could be forced to step up their enforcement—which Chief Eddie Garcia said could be difficult to determine. 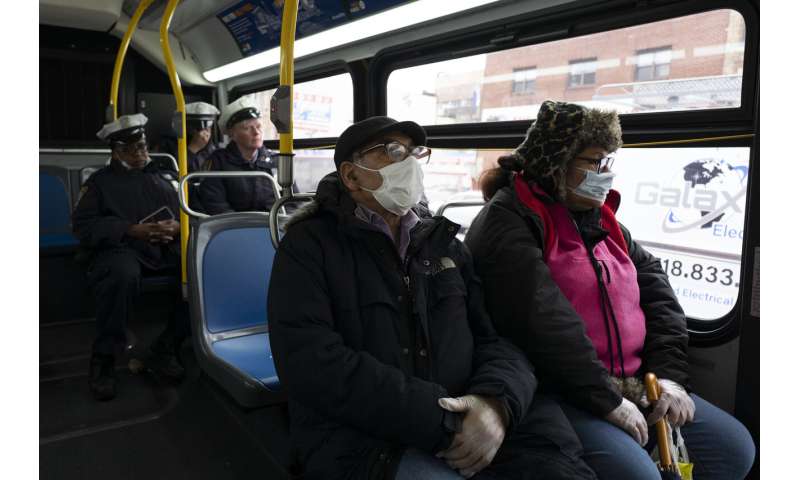 “They can’t play ‘red light, green light’ and say ‘everybody, freeze! Let’s get a tape measure out!’ ” he said.

In New York City, officers patrolling recreation areas and enforcing social distancing this week were seeing “a lot of empty soccer fields and a lot of empty basketball courts, which is good,” NYPD Chief of Department Terence Monahan said.

For now, the department is trying to avoid a more lax approach used in Italy that is believed to have only fueled infection rates, while avoiding any semblance of the Big Brother-type crackdown in China.

As the crisis worsened, Italy ordered police to patrol cafes to make sure that people kept their distance and that shops shut at 6 p.m. each day, only to see the death count continue to rise. It has since shut down bars and cafes altogether.

In China, officials took more extreme measures, including locking people inside their apartment complexes. The country’s official media showed video from a drone sent out to chase down and shame people not wearing masks. 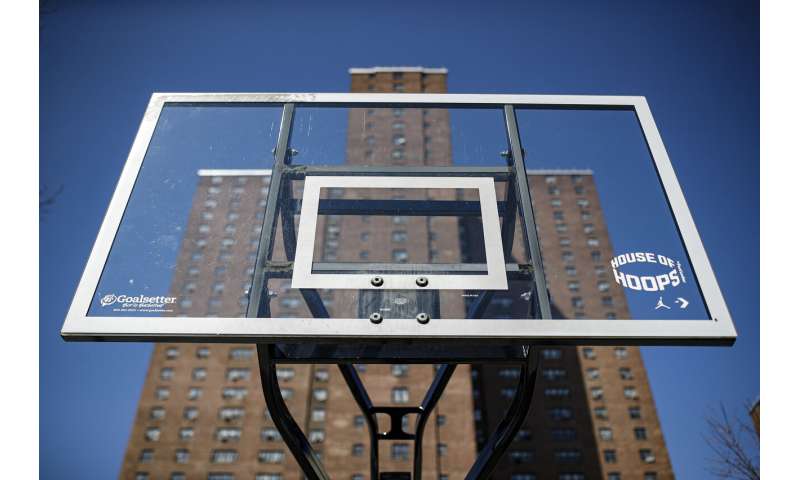 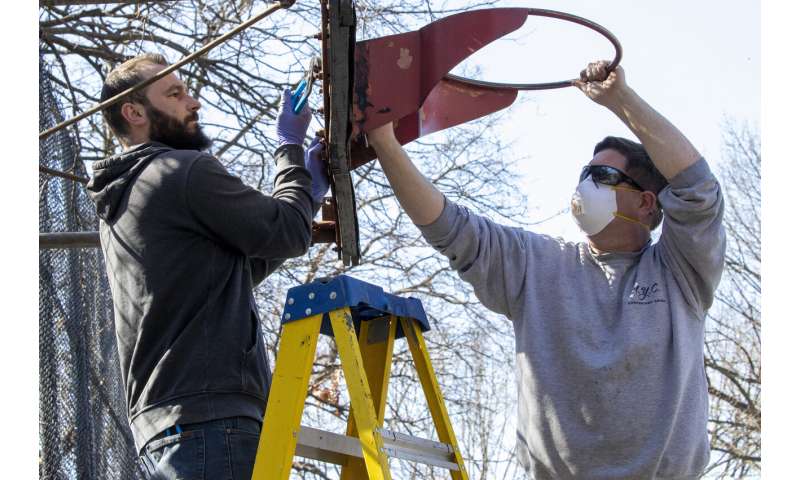 Singaporean authorities criminally charged a couple who lied about their travel history and revoked the residency of a man who broke his medical quarantine.