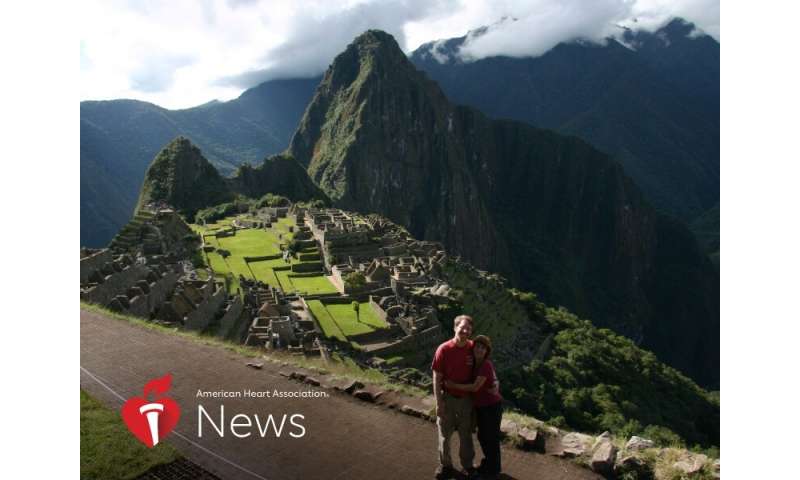 Since marrying in 2002, Doug Behan and Lise Deguire have gone on safari in Tanzania, watched the sunset over the Santorini caldera in the Greek Islands and walked through the ruins of Machu Picchu in Peru.

And those are just a few of their annual excursions. “It’s on my bucket list that I want to visit every continent,” Deguire said.

Early this year, the Yardley, Pennsylvania, couple began planning a 12-day trip to Japan in March. But then news of COVID-19 began saturating the airwaves. By February, the couple made the difficult decision to cancel, instead booking a one-week trip to New Mexico. As the virus continued to spread even more, they nixed that, too, replacing it with a three-day retreat at a local spa.

But on March 19, Pennsylvania Governor Tom Wolf ordered all non-life-sustaining businesses to close their physical locations.

“That was pretty devastating,” Deguire said. “Travel makes me feel very alive, like living on the edge in a way that’s exciting and fulfilling.”

It’s not just tourists who are canceling trips. North Carolina’s Outer Banks set up checkpoints to greet visitors, temporarily barring non-permanent residents and those without an entry permit. It’s one of several resort communities around the country, including Key West and California’s Mono County, which requested visitors stay away—sacrificing vital tourism dollars in an effort to keep out COVID-19.

That’s in line with recommendations by the Centers for Disease Control and Prevention, which recommends people stay at home as much as possible and to avoid travel altogether, especially when sick.

The unprecedented travel restrictions may take a toll, said James Petrick, a professor, research fellow and the associate department head for graduate studies in the department of recreation, parks and tourism sciences at Texas A&M University in College Station.

“We know that we learn much more when we’re experiencing new things, and relationships are stronger when a couple travels together,” he said. “The benefits that we receive when we travel don’t just exist on vacation. They exist afterward and embed themselves in our existence.”

Indeed, a number of studies have shown that even planning for a vacation makes people happier.

Not to mention the health benefits.

A 2000 trial that tracked middle-aged men for nine years found those who take an annual vacation were less likely to die from heart attacks and other cardiovascular-related issues. And women who vacation regularly were found in a 1992 study to be less likely to have a heart attack or coronary death than those who did so less often.

That makes sense to Petrick. “If I travel somewhere and come back, I’m less stressed than I was before.”

And stress can impact health and wellbeing in many ways. According to Dr. Anand Rohatgi, a preventive cardiologist and associate professor of medicine at UT Southwestern Medical Center in Dallas, chronic stress can flood the body with compounds called catecholamines, which include so-called stress hormones like adrenaline.

“If you’re always having increased catecholamines in your system, it can lead to high blood pressure, worse metabolism and worsening of inflammation in your body,” Rohatgi said. “Over time, that can lead to more plaques in your arteries, heart attacks and strokes.

“Whatever your environment is, if it’s stressful, taking a break from it can improve heart health,” he added.

Both Petrick and Rohatgi said to achieve the greatest effect, the vacation should be distinctly different from one’s day-to-day environment—especially the stressful parts. That means, for one, fighting the temptation to check work emails.

“It’s important to relax and not have to think about things that add to stress—how am I going to pay the bills, work responsibilities and perhaps even caretaking responsibilities,” Rohatgi said. “You want to be in a place where that burden is lifted.”

In a time when travel is all but restricted, however, what should people do to achieve those benefits?

Rohatgi recommends people get out and explore new parks and trails, visit new areas in the community and develop new hobbies. Setting aside time to be alone also is important.

“Read a book, listen to music, and build in a couple of times per day where you can go outside and take a walk,” he said.

Petrick advises people to get creative about how they vary their routine. One idea is to take a drive and allow a literal roll of the dice to determine which way to turn at each intersection. Or make various itineraries of day trips.

“When we get outside of our usual environment, the brain is much more active,” he said. “If you are staycationing, you have to find a way to make it novel.”

Behan and Deguire have taken that to heart.

For example, during a recent “Lord of the Rings” viewing party with their two college-age daughters and a friend who is staying with them, the entire family dressed up as the characters from the movie, repurposing old rings, reimagining a pair of scissors as a sword and turning old clothes into hobbit capes and elf crowns.

“It was a hoot,” Deguire said.

But she admits it’s not quite as exciting as getting away. The entire clan was scheduled to depart on a Canadian cruise in August, but in late April, Deguire canceled that, too.