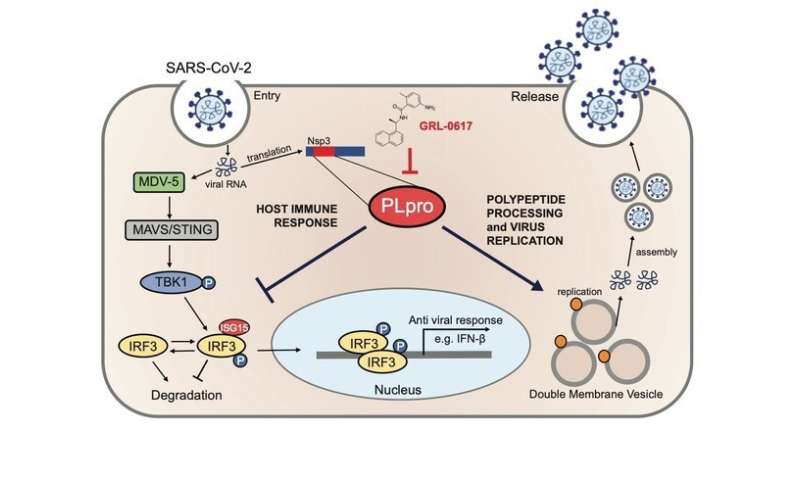 When the SARS-CoV-2 virus penetrates human cells, it lets the human host cell produce proteins for it. One of these viral proteins, called PLpro, is essential for the replication and rapid spread of the virus. An international team of researchers led by Goethe University, University Hospital Frankfurt and Max Planck Institute of Biophysics has now discovered that the pharmacological inhibition of this viral enzyme not only blocks virus replication but also strengthens the anti-viral immune response at the same time.

In the case of an infection, the SARS-CoV-2 virus must overcome various defense mechanisms of the human body, including its non-specific or innate immune defense. During this process, infected body cells release messenger substances known as type 1 interferons. These attract natural killer cells, which kill the infected cells.

One of the reasons the SARS-CoV-2 virus is so successful—and thus dangerous—is that it can suppress the non-specific immune response. In addition, it lets the human cell produce the viral protein PLpro (papain-like protease). PLpro has two functions: It plays a role in the maturation and release of new viral particles, and it suppresses the development of type 1 interferons. The German and Dutch researchers have now been able to monitor these processes in cell culture experiments. Moreover, if they blocked PLpro, virus production was inhibited and the innate immune response of the human cells was strengthened at the same time. The molecular dynamics calculations of Laura Schulz and Ahmad Reza Mehdipour at the Max Planck Institute for Biophysics and the Max Planck Computing and Data Facility in Garching have made a major contribution to elucidating the underlying mechanism and better understanding the binding of the inhibitor.

Ivan Đikić explains: “We used the compound GRL-0617, a non-covalent inhibitor of PLpro, and examined its mode of action very closely in terms of biochemistry, structure and function. We concluded that inhibiting PLpro is a very promising double-hit therapeutic strategy against COVID-19. The further development of PLpro-inhibiting substance classes for use in clinical trials is now a key challenge for this therapeutic approach.”

Another important finding from this work is that the viral protein PLpro of SARS-CoV-2 cleaves off ISG-15 (interferon-stimulated gene 15) from cellular proteins with a higher level of activity than the SARS equivalent, which leads to greater inhibition of type I interferon production. This is concordant with recent clinical observations which show that COVID-19 exhibits a reduced interferon response in comparison to other respiratory viruses such as influenza and SARS.

To understand in detail how inhibiting PLpro stops the virus, researchers in Frankfurt, Munich, Mainz, Freiburg and Leiden have worked closely together and pooled their biochemical, structural, IT and virological expertise.