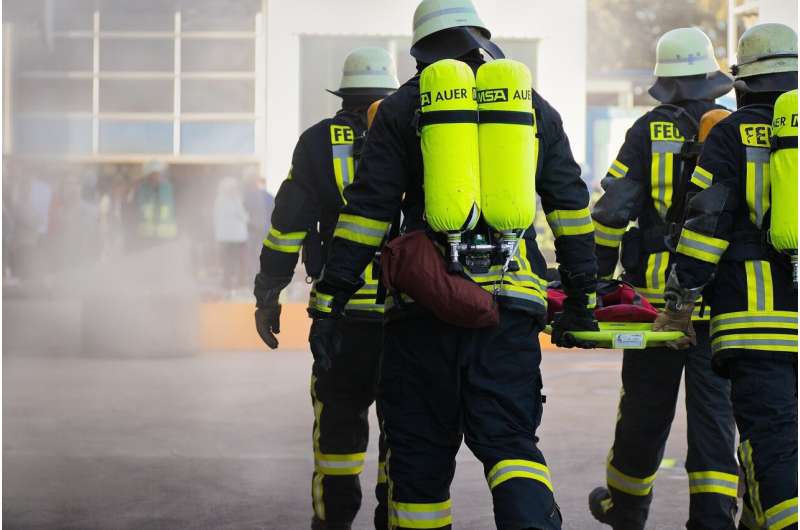 New research has found that toxic contaminants in fires are directly linked to increased rates of cancer and mental health issues among firefighters.

The findings support last year’s ruling from the International Agency for Research on Cancer, which says that exposure through working as a firefighter is carcinogenic—and goes a step further, by also highlighting the mental toll that firefighting can take.

The research, commissioned by the Fire Brigades Union (FBU) and independently carried out by the University of Central Lancashire (UCLan), is based on a survey of more than 10,000 serving and retired firefighters across the U.K., representing almost a quarter (around 24%) of the U.K.’s total firefighter workforce.

The findings, published in Scientific Reports today, show that 4.1% of surveyed firefighters were found to have a cancer diagnosis. Instances of cancer among firefighters aged 35–39 is up to 323% higher than in the general population in the same age category. U.K. firefighters who have served at least 15 years are found to be 1.7 times as likely to develop cancer than those who have served less time. Skin cancer is by far the most prevalent cancer reported—36% of those firefighters with cancer have been diagnosed with skin cancer.

Furthermore, firefighters are at least twice as likely to be diagnosed with cancer if they notice soot in their nose/throat or remained in their personal protective equipment (PPE)—which is often contaminated—for more than four hours after attending a fire.

UCLan’s research, which has been led by Professor Anna Stec, professor in fire chemistry and toxicity, also explores the link between firefighters’ exposure to fire effluents and mental health. 20% of respondents reported having a mental health condition. The rate of anxiety among surveyed firefighters was twice that of the general population, while the rate of depression was nearly three times that of the general population.

In addition, firefighters who noticed soot in their nose or throat for a day or more after attending incidents and firefighters who remained in their (often contaminated) protective equipment (PPE) for over four hours after incidents were also 2x as likely to report mental health disorders.

Firefighters were also significantly more likely to report any mental health condition if they identified noticing the smell of fire smoke on the body even after washing (1.3x more likely), or eating with sooty hands (1.3x).

Riccardo la Torre, Fire Brigades Union national official said, “We already knew that fire contaminants were very likely causing cancer and other diseases in firefighters. Now, we have evidence that cements that belief and also shows that contaminants can impact their mental health. No firefighter should suffer unnecessarily and there is much more that fire services can be doing to reduce exposure to fire contaminants.

“We demand to see more action on prevention, health monitoring, and facilities and contracts for proper PPE and workwear cleaning. Ministers and Fire Bosses can no longer bury their heads in the sand on this life and death matter. It is of absolute urgency that they act and this research only reinforces that point.

“These are independent, statistically significant, peer-reviewed findings that are specific to the U.K. I’m proud that the Fire Brigades Union commissioned this project to properly address such an important issue. The evidence is now undeniable and the days of hearing that we are behind other countries on this matter must surely end. We must act now to make firefighting a safer profession. This is an occupational hazard and no one should get ill, or worse, just for going to work. It’s important we learn and make the improvements in memory of every firefighter we have ever lost to these terrible diseases.”

Professor Anna Stec, Professor in Fire Chemistry and Toxicity at UCLan, said, “The findings of the U.K. Firefighter Contamination Survey not only confirm what we already know, that firefighters face a higher risk of cancer than the general population, but also brings to light new challenges firefighters have to face.

“Previous research on the mental health of firefighters has focused on psychological factors, but we now have evidence that there is a strong relationship between mental health and exposure to fire effluents. Everyone deserves to feel safe at work, and these studies show that measures such as health monitoring and reducing exposure from contaminants at the workplace will play an important part in protecting firefighters, both mentally and physically.”