If we put the wrong fuel in our car, we wouldn’t expect it to run properly yet nearly half of the daily energy intake of Australian adults comes from fuel not designed for our bodies. Our bodies respond by mounting a defence that ultimately affects how well we operate and our overall health.

If we were to change one thing in our diets that could make a measurable difference to our health and how we feel, it would be minimising our consumption of ultra-processed foods, replacing them with more whole foods. 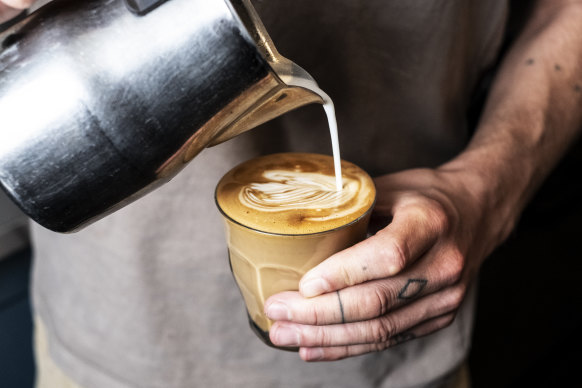 Even some seemingly healthy foods, like plant milks can be ultra-processed foods.Credit:Getty

Ultra-processed foods come in so many forms, not just fast foods and confectionary, it’s easy to consume them with every meal and not realise the cumulative effect they may be having.

Consider a typical morning for many people, who have not had snacks or even eaten junk foods. Many of the plant-based milks we might have with our coffee contain an array of additives including sugar, vegetable proteins, maltodextrin, acidity regulators, vegetable gums, and lecithin; our breakfast cereal or toast may also contain different sugars, emulsifiers, colours, preservatives and more; the premade salad dressing that sounds and looks so healthy may not be just extra virgin olive oil and vinegar but have antioxidants, sugars, colours, flavours and food acids in the mix.

So, what exactly is the problem with eating like this day in and day out?

The main causes of premature death and disability in Australia are obesity and chronic non-communicable diseases with poor diet being a leading risk for these.

This inflammation and other issues in our gut, which send signals to our brain, can lead to weight gain, affect our heart health, mental health and even our brain function.

A study published in the December 2022 issue of JAMA Neurology, followed 10 ,775 people over a decade and found a higher consumption of ultra-processed food was associated with cognitive decline.

It does not show causation and factors like socioeconomic status and education need to be considered, but it adds to many papers that have shown strong associations between ultra-processed foods and health problems including obesity, cardiovascular disease, hypertension and type 2 diabetes, says public health nutritionist Dr Rosemary Stanton.

Along with their inflammatory effect, ultra-processed foods are typically low in dietary fibre and have a soft texture that requires little chewing, Stanton adds: “Being so easy and fast to eat is a major reason why they are ‘overconsumed’.”

They are overconsumed, typically cheaper (though oats are more affordable than many highly processed cereals for instance) and often absorbed differently by our bodies. “The obvious example is the way bread is made alters the way it is digested, and its nutrients are absorbed,” she explains. “The typical modern loaf contains rapid dough risers, which means the dough rises in about five minutes. Traditional bread-making with yeast involves several hours for the dough to rise.”

These different processes change the structure of the starch in the bread, which affects how it is absorbed by the body and how quickly glucose is released into the bloodstream.

The lack of research into the safety of multiple additives in foods is another issue. “Additives are tested separately, but there is no research on whether the combination of additives is problematic,” says Stanton, a senior visiting fellow in the school of medical sciences at the University of New South Wales. “And ultra-processed foods usually have loads of additives.”

Jeyapalan agrees. “The combinations of the fats, the sugars, all the additives, the thickener, emulsifiers… what is that doing to someone’s body as a whole rather than the individual components that we pull out [and test]?”

Both the knowns and the unknowns of high consumption of ultra-processed foods are a concern, Jeyapalan says, especially if young children grow up eating these foods. “Are we almost putting them on the back foot from getting a healthy start to life?”

The question then is: How do we minimise these foods, especially when so many are healthwashed?

The answer doesn’t lie in the nutritional panel of packaged foods. “When we focus exclusively on nutrients, we can almost promote ultra-processed foods unintentionally because you can add a bit of fibre to something that naturally doesn’t have fibre in it, and your Health Star rating will go up,” Jeyapalan explains.

Current labels that make it hard to decipher all the different names for sugar also don’t help as added sugars are not differentiated from naturally occurring sugars. This is currently under review and opposed by the food industry but supported by public health experts, including both Jeyapalan and Stanton.

To support people, particularly the most vulnerable, ultimately there needs to be policy change. “We really need to be thinking about addressing food-related issues as a foundational issue and reducing barriers to good health for people who come from marginalised groups,” Jeyapalan says.

As individuals trying to navigate confusing labels and minimise ultra-processed foods, there are things we can do, however. The ingredients label on packaged foods may be the best place to start.

Look at the first three things that are on an ingredients list of a product, suggests Jeyapalan.

“Do you recognise them as being whole food? So, is it apple as a whole or is it apple extract or concentrate? Is oil the first thing rather than a whole food?”

For a long time, Stanton has also advised people to read the ingredient list:

“Years before Michael Pollan, I told people that if the ingredient list was long, included things you couldn’t pronounce or that your grandmother had never heard of, it was probably best not to buy the product, or at least buy it only rarely.”

Make the most of your health, relationships, fitness and nutrition with our Live Well newsletter. Get it in your inbox every Monday.

Most Viewed in Lifestyle