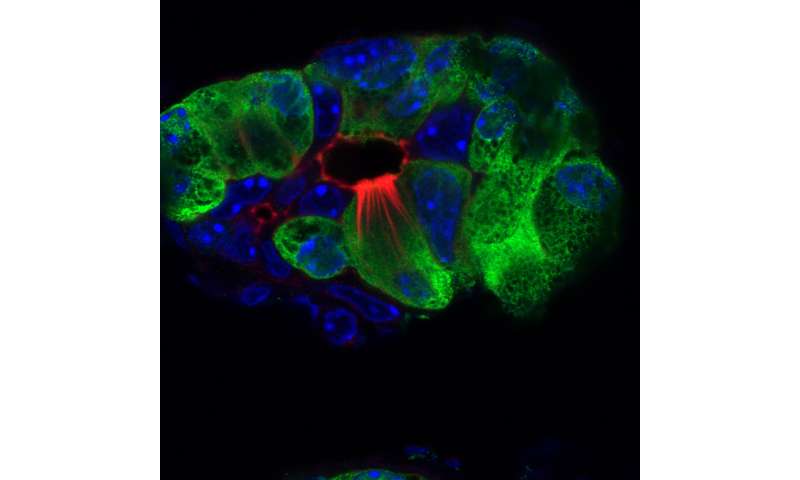 Persistent inflammation of the pancreas (chronic pancreatitis) is a known risk factor for developing pancreatic cancer, the third-deadliest cancer in the United States. Tuft cells—cells sensitive to chemical (chemosensory) changes typically found in the intestines and respiratory tract—had previously been discovered in the pancreas, but their function has largely remained a mystery. Now, a team of Salk scientists led by Professor Geoffrey Wahl and Staff Scientist Kathleen DelGiorno has uncovered the formation of tuft cells during pancreatitis and the surprising role of tuft cells in immunity, using mouse models of pancreatitis. The findings, published in Frontiers in Physiology on February 14, 2020, could lead to the development of new biomarkers to test for pancreatitis and pancreatic cancer.

“By understanding these early stages of pancreas disease, we hope our work will lead to the development of new strategies to diagnose and treat pancreatitis and pancreatic cancer early on,” says Wahl, co-corresponding author and holder of the Daniel and Martina Lewis Chair in Salk’s Gene Expression Laboratory.

The pancreas is an abdominal organ that plays a role in digestion and blood sugar regulation. Yet, scientists know little about how the pancreas recovers from injuries, such as pancreatitis, or fights off pancreatic cancer. Most of the pancreas is composed of acinar cells, which produce and secrete digestive enzymes. Acinar cells also have the ability to transform into another type of cell called a tuft cell. Scientists do not know all of the functions of tuft cells, but previous work showed that intestinal tuft cells secrete the protein IL-25 to support the immune response during parasitic infections.

“Since cancer has been called ‘the wound that never heals,’ we wanted to investigate how the pancreas heals from pancreatitis to better understand pathways that may be co-opted by cancer,” says Razia Naeem, co-first author and laboratory technician in the Wahl lab.

The researchers used a combination of techniques including histology, imaging and molecular strategies to characterize tuft cell populations in pancreatitis mouse models. They found that, although the pancreas does not normally contain tuft cells, during pancreatitis acinar cells undergo complex changes to become tuft cells, as a normal part of pancreatic injury and recovery. This transformation is similar to a reserve soldier (acinar cell) who must then change from their civilian clothes into that of a soldier (tuft cell) to fight off the enemy of inflammation.

The researchers also observed that the pancreatitis-induced tuft cells secreted IL-25 to promote the immune response, similar to what had previously been found in the intestine. Thus, tuft cells may play a role modulating the immune system during pancreatitis.

“The genetic susceptibility of tuft cell formation may represent a critical factor in pancreatitis formation, severity and progression to cancer in humans,” says Kathleen DelGiorno, first and co-corresponding author of the paper and staff scientist in the Wahl lab. “Our work demonstrates that it’s important to use the right mouse model to study pancreatitis and pancreatic cancer for there to be relevance to humans.”

The team’s work shows that using genetically diverse mice may better represent the complex human genome, allowing for more translatable modeling of disease in the lab, according to Wahl. The findings could mean that some people may be more susceptible to getting pancreatitis than others.