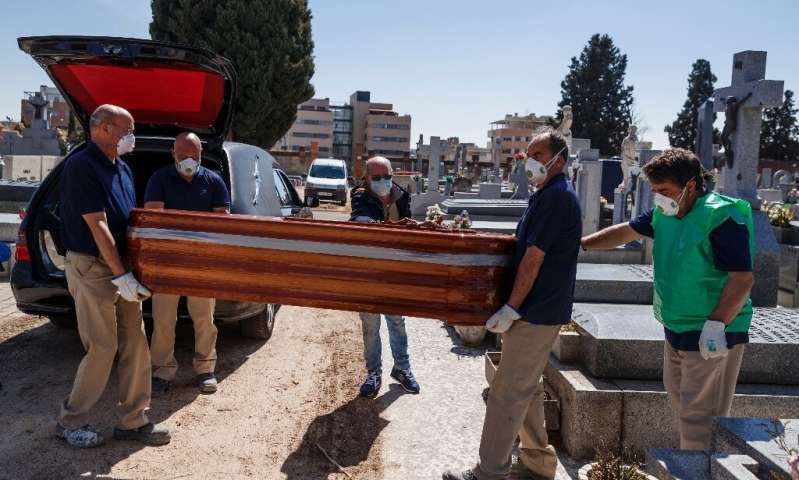 Spain broke another national record of daily coronavirus deaths Sunday as more than 40 percent of the world’s population was asked to stay home in hopes of halting the deadly march of a disease that has claimed more than 32,000 lives.

A deluge of patients are overwhelming hospitals in Europe and the United States, now the focal points of a pandemic that is upending the global economy in unprecedented ways.

In the US, an about-face by President Donald Trump on quarantining New York captured the panic and confusion unfurling across many parts of the world where measures to contain the pandemic change on a daily basis.

As of Sunday, more than 3.38 billion people were asked or ordered to follow confinement measures, according to an AFP database, as the virus infects every sphere of life, wiping out millions of jobs, postponing political elections and pressing pause on the sporting scene.

Worst-hit Italy and Spain, which together account for more than half of the world’s deaths, are clinging to hope that they are nearing the peak of the crisis.

But even as the growth rate of deaths slows, Madrid announced a rise in its 24-hour toll for a third consecutive day on Sunday, with 838 fatalities.

‘We are on the verge’

Spain is toughening already tight restrictions on movement while Italy is also expected to extend a shutdown past the April 3 deadline—despite the debilitating economic impact on the most vulnerable. 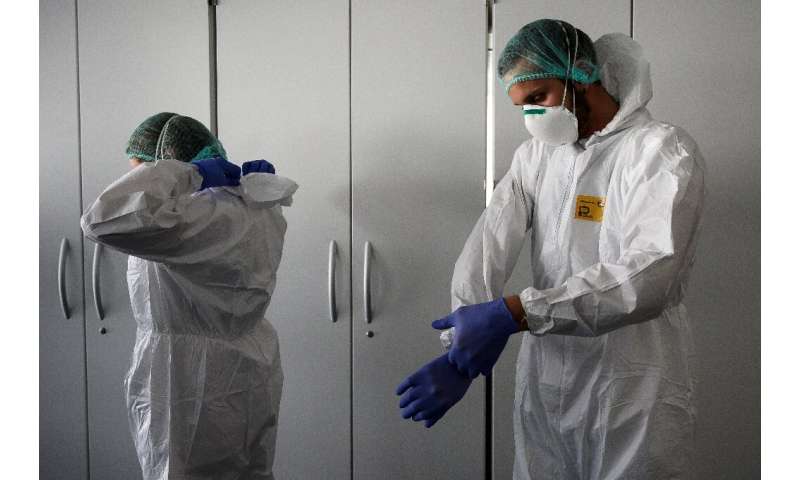 “My ICU (intensive care unit) is completely full,” said Eduardo Fernandez, a nurse at Infanta Sofia hospital in Madrid, where authorities have turned an event space into a 5,500-bed field hospital and transformed an ice rink into a morgue.

“If it is not a complete collapse, we are on the verge,” the nurse added.

The pandemic has spurred a worldwide scramble for medical gear as doctors and nurses in some of the world’s wealthiest cities struggle to dole out limited stocks of face masks and life-saving respirators.

From snorkel masks to 3D-printed face shields, creative solutions have popped up around the globe in efforts to plug the gap as factories rush to keep up with international demand.

But frontline medical staff don’t have time to spare.

“I have nothing for my head, nothing for my shoes,” said Diana Torres, who works in a rehabilitation centre in New York city, the epicentre of the US outbreak.

“Everybody is scared,” she said, explaining how it took significant effort to acquire one face shield, one N-95 respirator mask and one gown—all of which she said she would have to reuse. 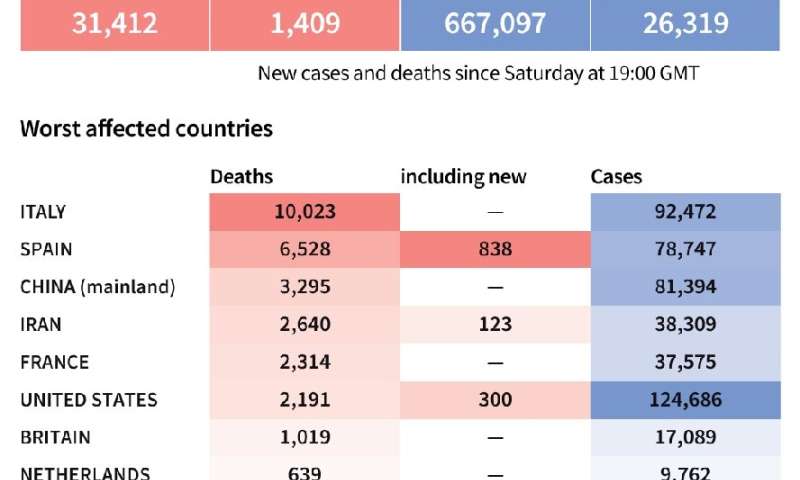 Some leaders warned the worst is yet to come as governments extend containment measures and roll out rescue packages aimed at staunching the bloodletting of their economies.

The US is now home to the highest number of confirmed COVID-19 infections globally with more than 124,000 cases, according to a Johns Hopkins University tally, which put worldwide deaths at 32,137.

On Sunday the country’s top infections disease scientist, Dr. Anthony Fauci, cautiously predicted the virus could claim 100,000 to 200,000 lives in the US.

Asked how soon the wider availability of testing might allow a lifting of travel and work restrictions, Fauci told CNN:

As US states impose a patchwork of measures, President Trump sowed confusion over the weekend by back-peddling on a proposal to impose a broad lockdown on New York and its neighbours. 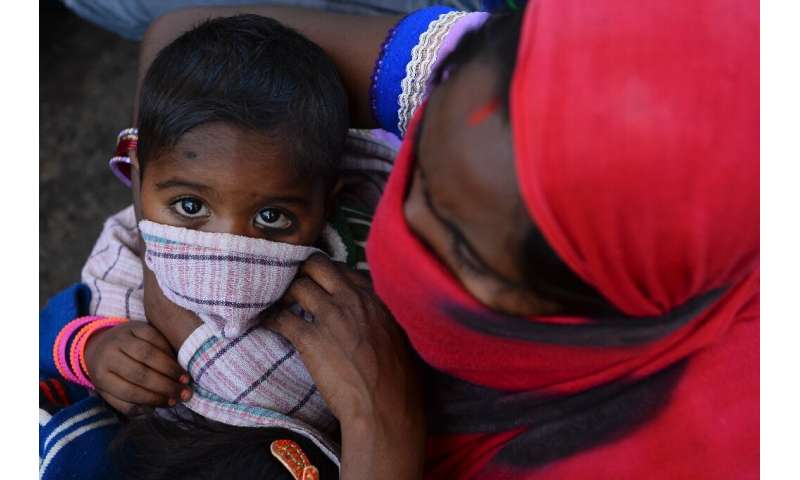 “A quarantine will not be necessary,” Trump tweeted eight hours after he stunned the New York metropolitan region with a proposal to place it under quarantine.

Trump’s reversal came on the same day the US death toll topped 2,100, more than doubling in just three days. More than a quarter of the fatalities were in New York City.

Across the Atlantic, the death toll passed 1,200 in the UK as Prime Minister Boris Johnson—who tested positive for the virus last week—warned that dark days were on the horizon.

“We know things will get worse before they get better,” Johnson said, adding he has only mild symptoms.

While Johnson initially said the shutdown would last three weeks, but the country’s deputy chief medical officer warned that life would not return to normal for six months or more.

Italian Prime Minister Giuseppe Conte also warned that a “quick return to normal life” was unlikely, despite the economic hardship of the shutdown in place since March 12. 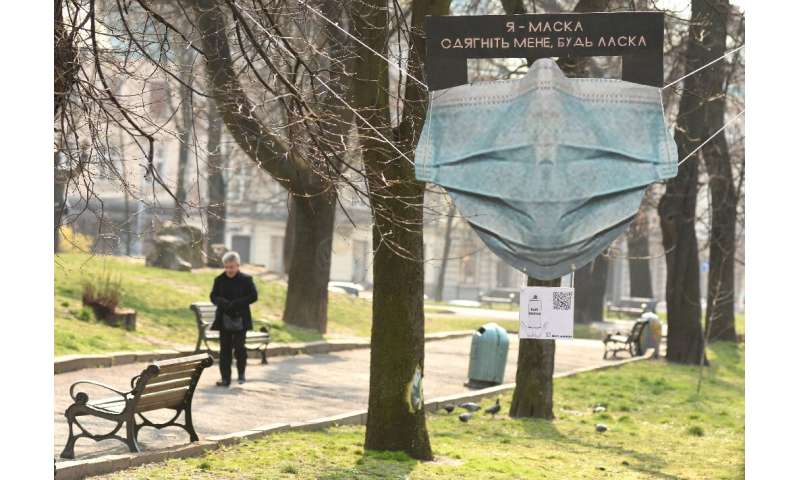 On the Italian island of Sicily, police with batons and guns moved to protect supermarkets after reports of looting by locals who could no longer afford food.

“We have no money to pay, we have to eat,” someone shouted at the cashiers in a Palermo supermarket, according to La Repubblica newspaper.

In hard-hit Iran, President Hassan Rouhani also said the country must prepare to adjust to “the new way of life” for a long time, after 123 more deaths were recorded.

More than 667,090 cases of the novel coronavirus have been officially declared around the world since the outbreak began late last year, according to an AFP tally.

As health facilities in even rich countries buckle under the pressure, aid groups warn the toll could be in the millions in low-income countries and war zones such as Syria and Yemen, where healthcare systems are in tatters. 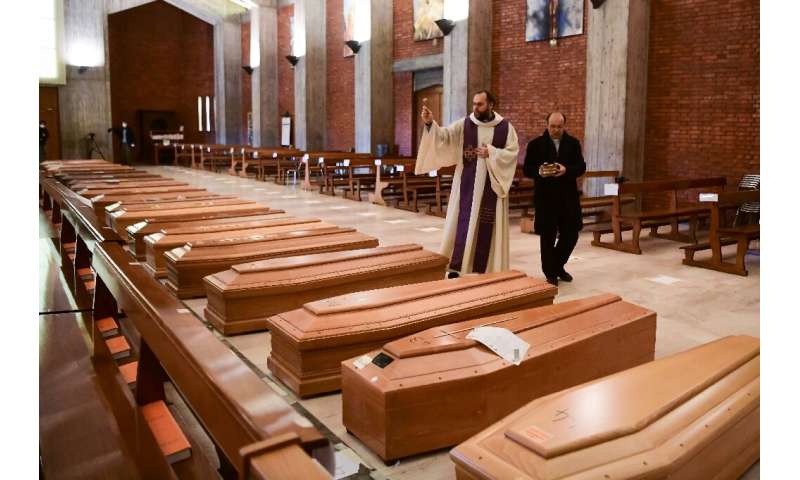 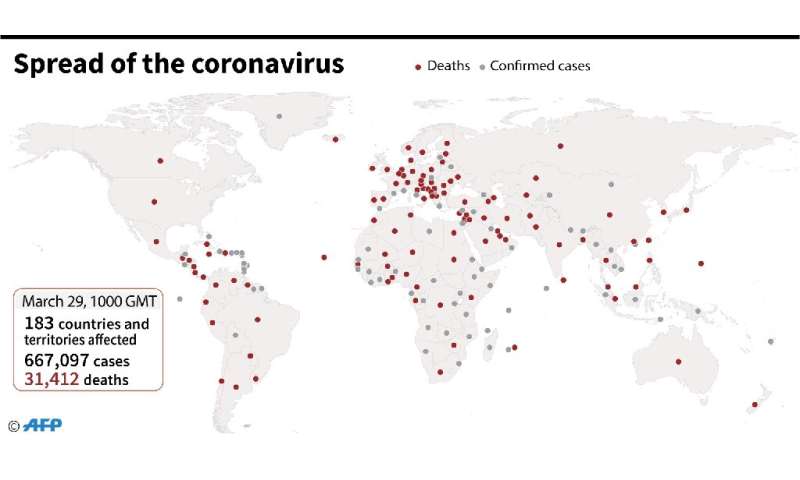 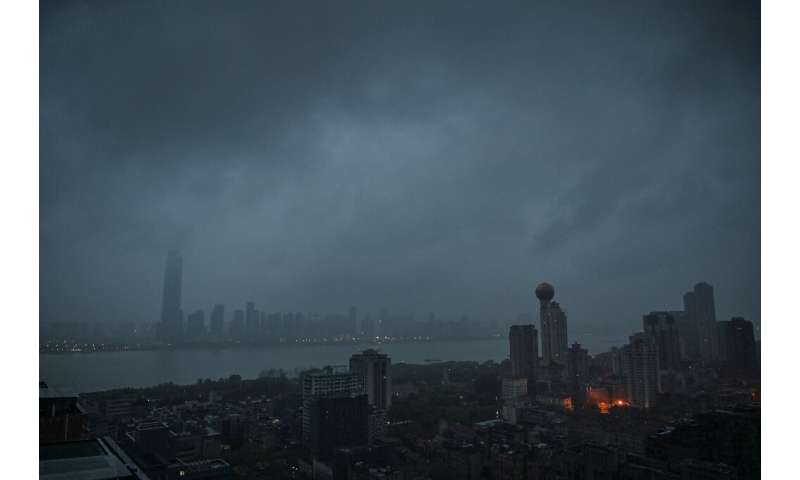 In Africa, impoverished Mali went ahead with a parliamentary election Sunday just hours after the country reported its first coronavirus death.

Meanwhile Benin President Patrice Talon said his country could not enforce public confinement because it lacks the “means of rich countries”.

Three billion people around the world lack access to running water and soap, which are the most basic weapons of protection against the virus, UN experts warn.

In the ground zero-city of Wuhan, however, life is creeping back to normal.

“Initially we were more scared and maybe thought it was safer overseas,” said Han Li, who is helping process the flood of locals returning to Wuhan after having been were stranded elsewhere during the more than two-month lockdown.