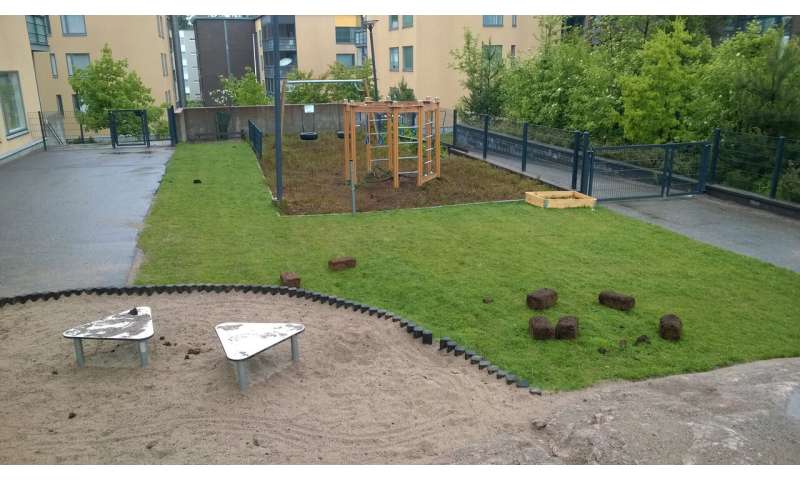 A team of researchers affiliated with multiple institutions in Finland and one in the Czech Republic has found that replacing asphalt in play areas at daycare centers with natural vegetation can lead to stronger immune defenses in the children at the centers. In their paper published in the journal Science Advances, the group describes removing asphalt from play areas at several daycare centers and replacing it with forest floor vegetation, and what they found when they tested the children who attended the centers.

Prior research has suggested that one of the reasons for increased rates of autoimmune diseases in many parts of the world, such as inflammatory bowel disease, type 1 diabetes, eczema and asthma, is lack of exposure to elements that push children’s immune systems to respond. The thinking is that repeated exposure to natural elements like dust, dirt and pollen while young strengthens the immune system. Researchers have noted that children living in some urban areas are most at risk of missing out on such exposure and that might explain their higher rates of autoimmune diseases. In this new effort, the researchers sought to test this theory by changing the environment in which such children play—playgrounds at daycare centers in urban areas.

To learn more about the possible impact of exposure to natural elements, the researchers received permission to replace the asphalt at several daycare centers in two of Finland’s major cities—and then to replace it with turf dug up from forest areas. In addition to forest floor sod, the researchers also brought forest shrubs, bushes and mosses. The children in the centers were then encouraged to play in the upgraded areas during their time outdoors. The children were all tested prior to installation of the natural material and then again 28 days afterward, for immune system markers.