China reported a 14,000 patient spike in coronavirus cases on Thursday, but the World Health Organization (WHO) says the numbers are due to confirmation of suspected cases.

The WHO said Thursday that outside China and the quarantined cruise ship in Japan, they are not seeing extreme increases in coronavirus cases.

Previously, Hubei province, like the rest of the world had only been classifying cases as ‘confirmed’ if the patients tested positive for coronavirus.

Now, in Hubei alone, official have switched the states of tens of thousands of suspected patients to ‘confirmed’ based on symptoms alone.

Other places will continue to only report test-confirmed cases and, after this batch, the WHO does not expect to see similarly dramatic daily increases in China or elsewhere, despite the confirmation of two US cases in less than 24 hours. 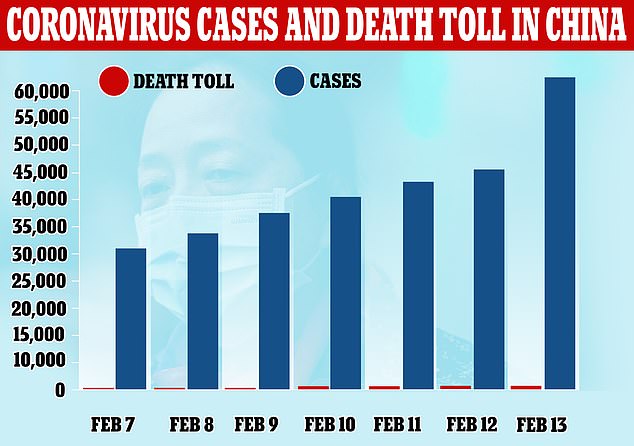 WHO officials said Thursday that the spike in coronavirus cases in China was due to Hubei officials changing the status of thousands of ‘suspected’ patients to ‘confirmed’ based on symptoms rather than testing. Officials don’t anticipate similar rises to continue 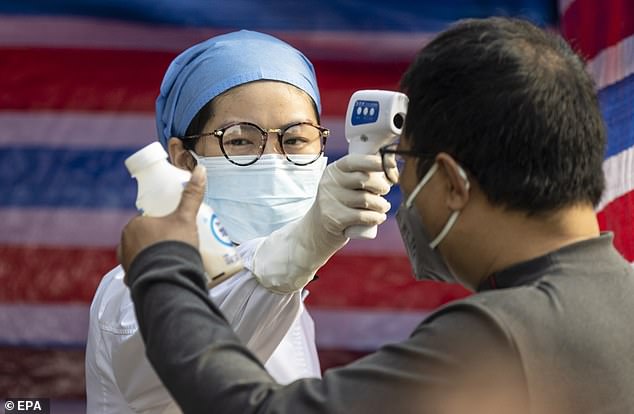 Prior to Thursday, on lab-confirmed cases of coronavirus were counted in Hubei, and will continue to be elsewhere. But officials at the epicenter of the outbreak have now designated confirmed cases based on symptoms like fever, cough and lung presentation. Pictured: A Chinese health worker takes a resident’s temperature

‘Outside cases on the Diamond Princess cruise ship we are not seeing dramatic increases in cases outside China,’ Mike Ryan, executive director of WHO’s health emergencies program, told a Geneva news briefing.

A further 44 cases were reported on the Diamond Princess on Thursday, raising the total to 219, though authorities said some elderly people would finally to be allowed to disembark on Friday.

In mainland China, there are now nearly 60,000 people categorized as infected with coronavirus and 1,367 dead.

There are also more than 13,400 ‘suspected’ coronavirus cases – a figure not reported to the WHO by any other nation or territory.

Amid concerns over China’s transparency and speculation that the new cases were the result of a cover-up, Dr Morgan explained a shift in how Hubei is confirming cases. 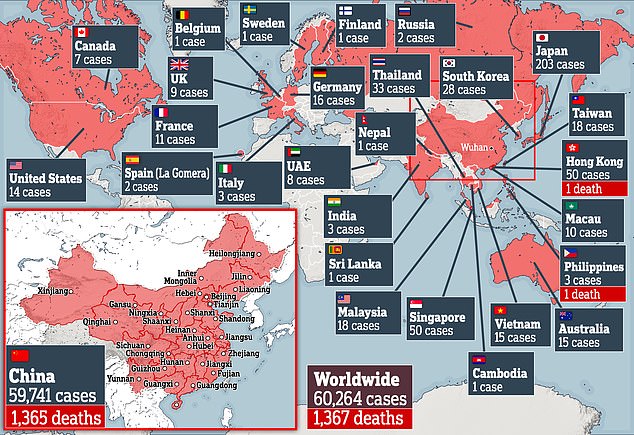 Coronavirus has spread from China to 24 other countries worldwide, but no new nations have been infected in the last week, and dramatic rises are not being seen elsewhere 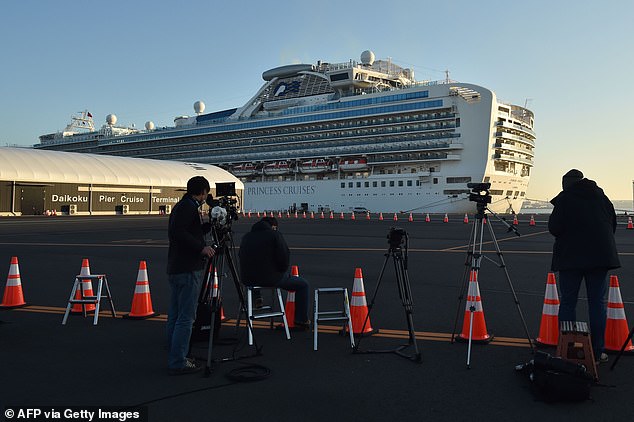 The exception is the quarantined Diamond Princess cruise ship, where another 44 infections were confirmed on Thursday, bringing the total cases on board to 219

‘These are not new cease being added, these are reclassifications of suspect cases waiting for testing that have now have been defined as confirmed based on their clinical basis alone,’ he said Thursday.

Other nations have been and will continue to report only lab-tested cases as ‘confirmed,’ the WHO said.

Ryan also said the main UN health agency expected the rest of a special WHO team to arrive in China over the coming weekend to investigative the epicentre of the coronavirus outbreak.