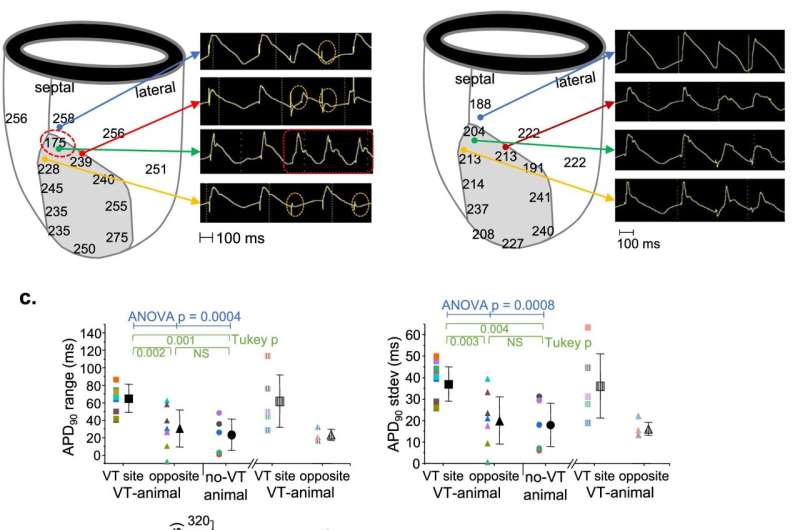 UMass Chan researchers have published a study that brings new understanding to cellular changes in heart attack scars associated with subsequent arrhythmias, a leading cause of death. The paper, authored with scientists from Case Western Reserve University in Cleveland, Ohio, appears in the Feb. 11 issue of Nature Communications.

J. Kevin Donahue, MD, professor of medicine, director of electrophysiology research in the Division of Cardiovascular Medicine and a co-author of the paper, said the team found increases in two proteins associated with changes in the heart’s electrical function that explained the arrhythmias.

“With further development, these findings will help us identify people at risk for these abnormal heart rhythms and to fix this problem in people who have it,” he said.

The research was conducted in pigs, whose hearts are almost identical to human hearts, Dr. Donahue said.

Heart muscle is damaged and becomes scarred following a heart attack. Investigators believed that there was something different about channels of heart muscle running through heart attack scars associated with arrhythmias, compared with scars with no arrhythmias.

“It was just the basic idea that we were going to start with a uniform playing field in which we’re only comparing scar to scar, and inside of scar, and what we really want to know is what’s special about the area where the arrhythmia comes from,” said Donahue.

They identified two proteins, KCNE3 and KCNE4, that affected the electrical process of the heart’s pumping. In scars with increased levels of these proteins, which supported ventricular arrhythmias, one side of a channel was resetting too slowly while the other side was too fast.

“And so, we realized that was the perfect setup for a particular type of arrhythmia, where it’s a short circuit and it goes around and around through that loop,” Donahue said.