The more you drink, the older your BRAIN: Vital organ shrinks quicker in those who drink every day, study shows

Blurred vision and slurred speech are expected when someone has drank too much.

How alcohol harms the brain in the long term is not so clearly understood – particularly how it ages the brain.

Now, a study has found drinkers who like a pint of beer or glass of wine every day show more signs their vital organ is shrinking.

Researchers looked at brain scans from thousands of Britons aged between 45 to 81, and compared it with their drinking habits.

For every extra gram of alcohol consumed per day, participants brains’ were 0.02 years older – the equivalent of a day and a half.

An ‘old’ brain would show more signs of deterioration than the brains of average people the same age in scans. 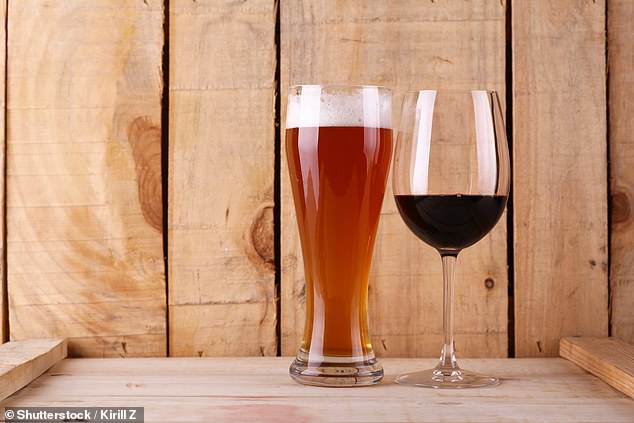 Drinkers who like a pint of beer or glass of wine every day have older brains, scientists warn

Certain lifestyle habits, such as heavy smoking and alcohol consumption, will alter how the brain works.

For the first time, the researchers at Keck School of Medicine of University of Southern California were able to quantify how booze – as well as smoking – leads to brain ageing.

Dr Arthur Toga and colleagues assessed 17,308 individuals aged 45 to 81 years whose data was included in the UK Biobank.

Men and women in the UK are advised not to drink more than 14 units a week on a regular basis.

One unit equals 10ml or 8g of pure alcohol, which is around the amount of alcohol the average adult can process in an hour.

A pint of strong lager contains 3 units of alcohol, whereas the same volume of low-strength lager has just over 2 units.

They identified relative brain age, which is an individual’s brain age based on MRI measurements, compared to the average brain age of their peers.

In the 11,600 individuals for whom information on drinking behavior was collected, those who drank alcohol on most days had a higher relative brain age than those who drank less frequently or not at all.

There are eight grams of alcohol in one unit. A spirit shot is one unit, a pint of higher-strength beer or large glass of wine is three units.

Each additional gram of alcohol consumption per day was linked with 0.02 years of additional brain age.

The authors found the same results for the 11,651 individuals who provided smoking information.

Each additional pack-year – defined as smoking a pack of cigarettes per day on average for a year – was linked with 0.03 years of increased relative brain age.

The authors said the changes in brain age are ‘moderate’, and caution that various other environmental and genetic factors may impact brain age.

Writing in the journal Scientific Reports, they said: ‘We found that daily or almost daily consumption of tobacco and alcohol were both significantly associated with increased RBA [relative brain age].

‘Our results suggest that both environmental and genetic factors are associated with structural brain ageing.’

Commenting on the research, Derek Hill, a professor of medical imaging at University College London who was not involved in the study, said the research does not fully answer the question as to whether regular smoking and drinking damages the brain.

‘But it does suggest smoking and drinking may not be good for the brain, as a higher relative brain age is associated with a brain that functions less well,’ he said.

‘Perhaps the more interesting result is that people who drink three or four times per week have a brain age indistinguishable from those who abstain, whereas those who drink daily have a measurably higher brain age.

‘So this might provide further evidence that drinking in moderation is perfectly healthy, but drinking every day has health risks.’

Dr Toga and colleagues noted other research has identified key regions in the brain that shrink in response to alcohol and tobacco smoke.

It can also lead to a reduction in grey matter, which is essential for the communication of messages in the brain.