If you got your flu shot recently, your arm likely felt as though it had been sucker punched in the days afterward. (And if you haven’t received the vaccine yet, here’s your friendly PSA to stop putting it off.)

While that soreness shouldn’t be a reason you don’t get a flu shot ― because again, you really should go get one if you haven’t yet ― it turns out there are a few factors that influence whether or not your flu shot may cause discomfort in the day or two after getting one.

Below, experts explain the reason your flu shot hurts so badly and what you can do to relieve the pain a bit:

Good news: A little discomfort is a good sign.

“The flu shot is made to produce an immune response, so soreness is a sign that it’s working,” Nate Favini, the medical lead at Forward, told HuffPost. “Your body has an inflammatory response, and that’s what gives you immunity against the flu.”

This soreness also means that your immune system is making antibodies in response to the virus it was just injected with, which protects you from the actual flu if you become exposed to it. But if you don’t feel sore after your flu shot, that doesn’t necessarily mean you got a dud injection or that your flu shot isn’t working. You may have a higher pain threshold than you realize, or perhaps you were relaxed while getting your shot (Favini said it can hurt more if you tense your arm muscles during the shot).

If your arm does really hurt for the next day or two after your flu shot, don’t feel guilty about taking a day off of work or going easy on yourself because of the pain. The shot will help your company in the long run: One study found that people who got the flu shot reduced the number of workdays they would have lost due to flu-related illnesses by 32%.

How much it hurts may depend on how the shot was administered.

Slow injections may cause more pain, according to research published in the journal Vaccine. Researchers compared pain measurements in slow versus fast injections among infants and found that a faster shot reduced injection-induced pain when it came to certain vaccines, including the flu shot. A slower injection time means more time for the needle to be in contact with the skin, which could lead to the needle moving around more or even potentially cause muscle tissue damage, both of which make you feel sorer.

While you can’t exactly predict the style of the person giving you the shot, try stroking or applying gentle pressure to the skin near the injection site during the shot, said Michael Grosso, chief medical officer at Huntington Hospital in Huntington, New York. Just give the nurse or pharmacist a heads up if you want to do this step before they get started. They may opt to do it for you so that you don’t accidentally get pricked. 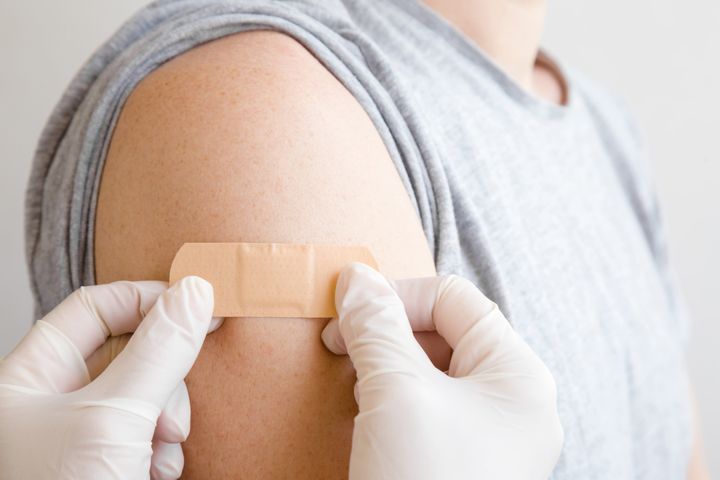 The flu shot may hurt less as you get older.

“Though it’s somewhat an individual thing, in general we should expect injection site pain to be less as we get older as our nervous systems start to wear out,” Grosso told HuffPost. “Adults can generally engage in self-distraction more effectively than children while avoiding behaviors that make shots hurt more, like tensing up the muscle or keeping the arm still afterwards.” (See that? Aging does have its perks.)

A lot of your pain may be mental buildup.

“There is a real mental component to getting a flu or any other shot,” said Stephen Higgins, medical director for Independence Blue Cross. “People experience pain differently. Some if it is related to our physiologic makeup, and some of it is related to past experiences and anticipation.”

For example, if you’ve previously undergone a medical procedure that involved antibiotics delivered through a needle that stung or if you’ve been inserted with an intravenous catheter for fluids, you might be turned off by the idea of getting the flu vaccine. Even though the needle used for flu shots is much smaller and finer, you could be anticipating the same pain from a past experience.

In severe cases, this can turn into a condition called trypanophobia, in which you feel dizzy, weak or extremely anxious in the presence of needles. And while the flu shot may hurt less as we grow older because of our aging nervous system, Higgins said anxiety around the flu shot could make you perceive more pain.

There are ways to make your shot flu hurt less.

Now that you know why your flu shot may be bugging you, you can still do a few things to help it hurt less both in terms of the level of soreness and the duration of discomfort (i.e. dealing with only a day of pain versus two or more).

“The best ways to minimize injection site pain is to move the arm around after the shot,” Grosso said. This will help circulation in the injection area by giving the muscle the blood flow and oxygen it needs to recover.

You can also place a cool compress on the injection site, which will reduce swelling and pain. Grosso also recommended taking a dose of pain medication like acetaminophen or ibuprofen if you’re feeling sore.

But whatever you do, don’t let the fear of pain deter you from getting the vaccine. The flu, which can become serious, kills 20,000 to 80,000 people every year, Grosso said. Last year, 79,400 people in the United States died from the flu, according to the Centers for Disease Control and Prevention.

“A momentary pinch is worth it to prevent a bad case of the flu — or worse,” Grosso said.